Sea Limited Is Oversold and Priced Like a Pre-Pandemic Bargain

By Steve Booyens March 8, 2022
This story originally appeared on InvestorPlace

Sea Limited (NYSE:SE) has lost more than half of its value during the past year. Many claim SE stock is still a strong sell because the current market climate isn't very receptive to growth stocks. 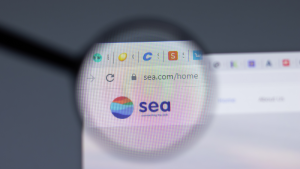 I don't think I need to be the one telling you the basic principle of buying low and selling high is what makes for a successful market participant. But the question remains: How do I know whether the price is low or high? Buying low isn't as easy as it may sound; many stocks lose an enormous amount of their value and never recoup it.

When it comes to SE stock, I'm taking a contrarian stance here, as I see its potential. I definitely think investors with the necessary intestinal fortitude could end up profiting massively in the long run.

Many of the firm's internal stakeholders and external analysts got ahead of themselves during the past two years by constantly overestimating its earnings per share (EPS) potential. Sea missed out on its EPS estimates on eight consecutive quarters, with operating costs not diminishing at the speed initially anticipated.

However, pulses were raised last week as the Singaporean technology prospect beat its EPS estimate by 3 cents per share. Sea produced firm-wide growth during 2021, with its e-commerce segment revenue growing by 89% and its digital financial services revenue increasing by 711%.

In addition, Sea added 7% in digital entertainment bookings for the year, with paying users increasing by 6%. The firm's management provided upbeat guidance for 2022, citing potential revenue growth of 75.7% for its e-commerce segment and 155.4% for its digital finance segment.

I found comfort in the fact that Sea has stocked up on cash while also de-levering its capital structure. The firm added $3.9 billion in cash to its balance sheet during 2021 and reduced its debt-to-equity ratio to 57.29%. That means equity investors now hold a superior residual claim compared to this time last year.

"E-commerce penetration in Indonesia, which is its core market, is about 7%. That probably goes to 40%, 50% over the next five, six, seven years. They can pretty much double their market share at least, so this is a business that can easily grow tenfold. That's certainly not in the current valuations."

Investors' support of Wood has certainly fluctuated lately due to the volatility of Ark's returns. It needs to be understood that Ark is a thematic investment fund, which means its returns are platykurtic in the short run but will likely yield consistent, index-beating returns in the long run.

According to my knowledge, Ark Invest believes job openings will remain fixed in the long run due to innovation, subsequently resulting in a deflationary environment. I have much belief in Ark's strategy, instilling confidence in my bullish bet on SE considering the investment fund's hefty exposure.

SE stock is looking pre-pandemic cheap. It has retraced and now only trades at 4.8x its sales, a 65.2% discount relative to its normalized average. I always find the price-to-sales ratio helpful, as it's less susceptible to short-term volatility manipulation than most other price multiples. In this case, it's clear the market has yet to fully price-in the firm's outstanding top-line growth.

Lastly, SE Stock's relative strength index value of 30.4 is near oversold territory, suggesting the market has overreacted to its bearish features. I'm betting on a mean reversion and think it's a reasonable time to enter SE stock before it's too late.

On the date of publication, Steve Booyens did not hold any position (either directly or indirectly) in the securities mentioned in this article. The opinions expressed in this article are those of the writer, subject to the InvestorPlace.com Publishing Guidelines.