Should You Buy the Dip in Six Flags Entertainment?

Despite achieving solid growth in its last reported quarter, Six Flags Entertainment's (SIX) shares are currently trading significantly below their 52-week high. So, would it be worth buying the stock...

By Pragya Pandey June 9, 2022
This story originally appeared on StockNews

Despite achieving solid growth in its last reported quarter, Six Flags Entertainment's (SIX) shares are currently trading significantly below their 52-week high. So, would it be worth buying the stock now? Read on, let's find out.

Six Flags Entertainment Corporation (SIX) in Grand Prairie, Tex., is the world's biggest regional theme park corporation and the largest operator of waterparks in North America, with 27 parks in the United States, Mexico, and Canada.

SIX's sales climbed by 68% in the first quarter, ending April 3, 2022, owing to numerous optimistic trends that include increasing attendance, higher ticket prices, and more spending per visit to its theme parks. However, the first quarter is a small part of SIX's year because several of its parks are closed throughout the winter. The second and third quarters account for almost three-fourths of its attendance. This fact could raise investors' concerns as increasing interest rates and inflation heighten the risk of declining consumer spending. 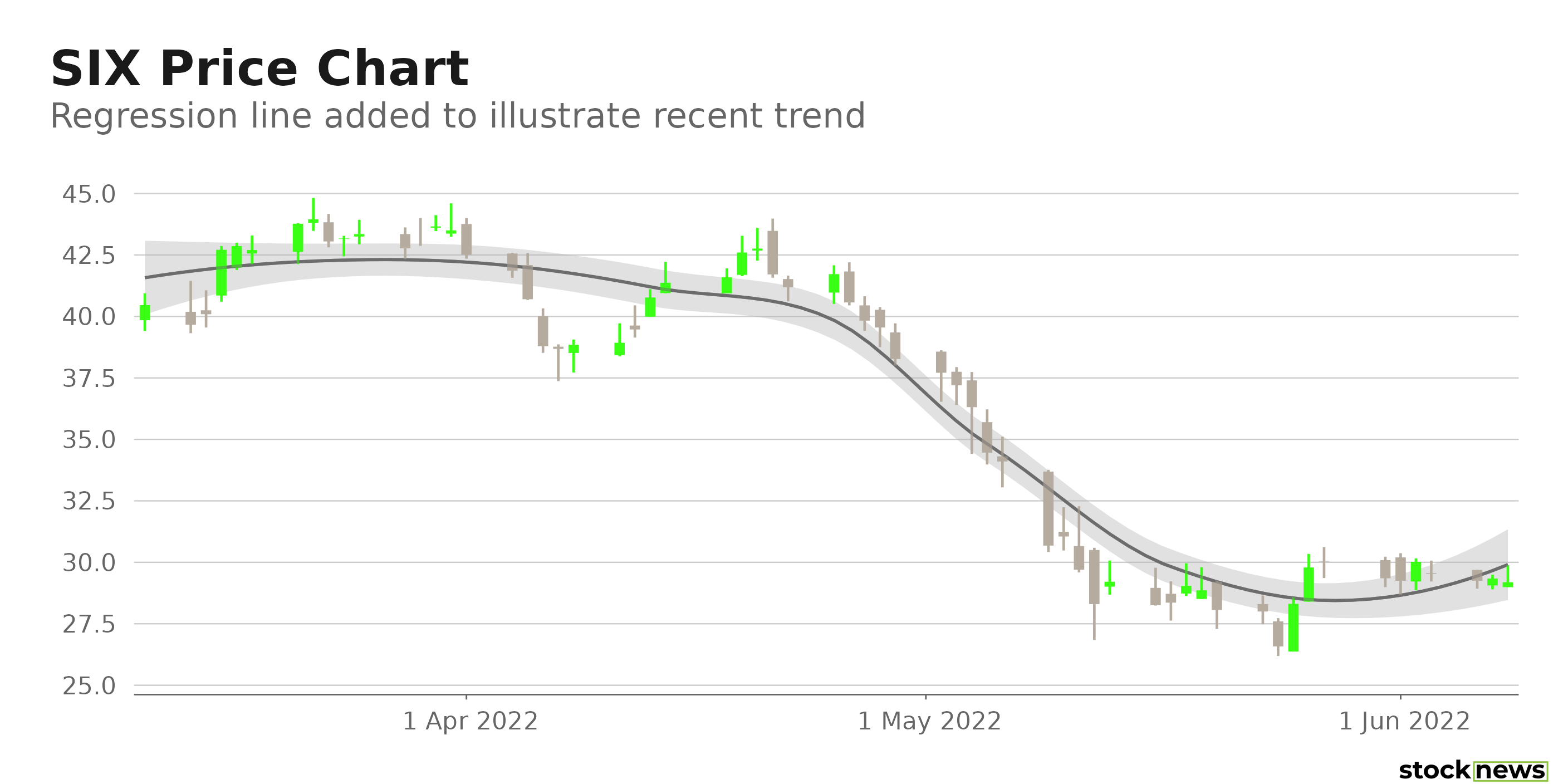 Here is what could shape SIX's performance in the near term:

SIX has an overall C rating, which equates to a Neutral in our proprietary POWR Ratings system. The POWR ratings are calculated by considering 118 distinct factors, with each factor weighted to an optimal degree.

Our proprietary rating system also evaluates each stock based on eight distinct categories. SIX has a D grade for Stability. Its 2.25 beta is in sync with its Stability grade. SIX has a Value grade of C, which is reflective of its stretched valuation.

Among the 16 stocks in the F-rated Entertainment – Sports & Theme Parks industry, SIX is ranked #4.

Beyond what I have stated above, one can view SIX ratings for Growth, Quality, Momentum, and Sentiment here.

SIX's stock has declined nearly 14.4% in price over the past month. While the company has exhibited solid growth in its last reported quarter, increasing inflation and high-interest rates could impact consumer spending, jeopardizing SIX's near-term prospects. So, we think investors should wait before scooping up its shares.

How Does Six Flags Entertainment Corporation (SIX) Stack Up Against its Peers?

While SIX has an overall C rating, one might want to consider its industry peer, Endeavor Group Holdings Inc. (EDR), which has an overall B (Buy) rating.

The post Should You Buy the Dip in Six Flags Entertainment? appeared first on StockNews.com