An Egg Beats Kylie Jenner for Most Liked Instagram Photo

Little is known about the origin of the egg's account, but with 2.6m followers it could now be considered an influencer.

The record for the most liked photo on Instagram has been broken. It previously belonged to reality TV star Kylie Jenner. It now belongs to an egg.

Over the weekend, a photograph of an egg became the most popular on the Facebook-owned image sharing site. 25 million people liked the photo, where as in comparison, only 18 million liked Jenner's photo announcing the birth of her baby with rapper Travis Scott. 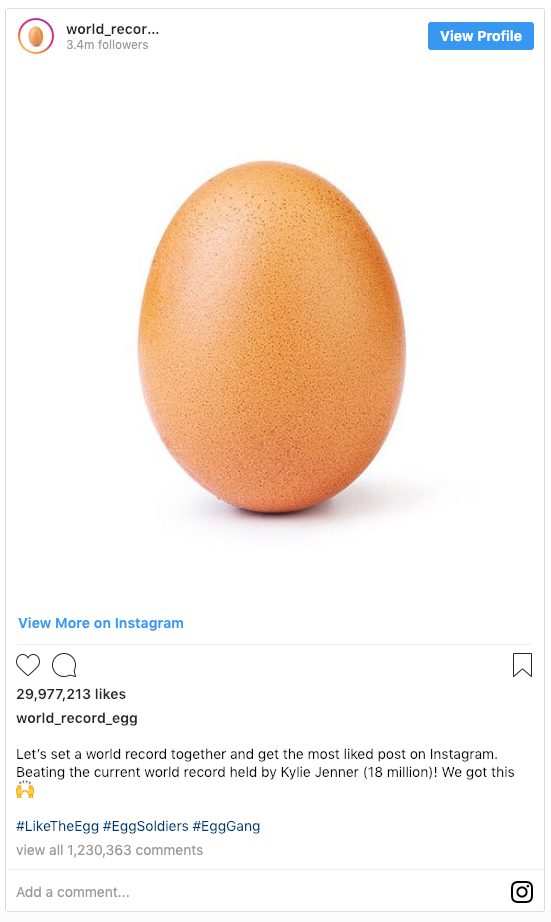 The egg's account, "world_record_egg," gained 2.6 million followers in the process, which could theoretically mean it is a social media influencer. In response to the egg beating her record, Jenner responded on her own Instagram account with a video of her cracking an egg open. 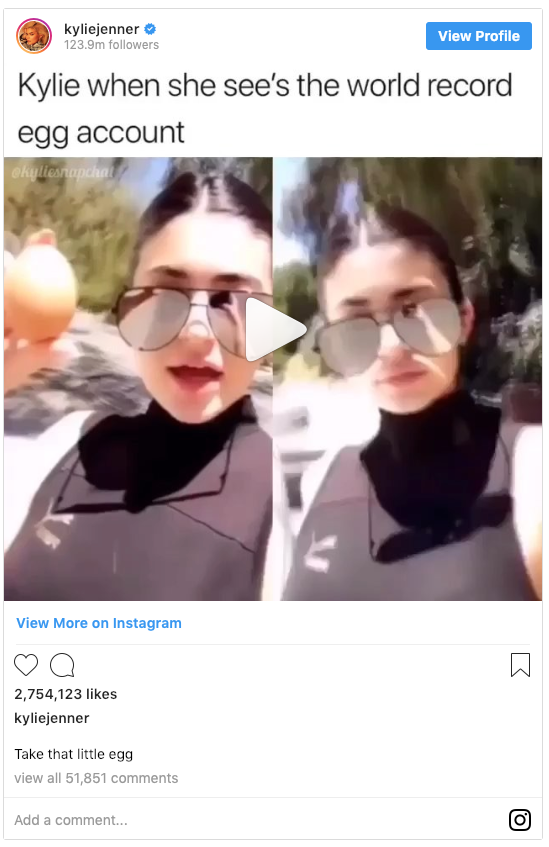 Very little is currently known about who is responsible for the account. The most obvious explanation in my view is that this is a Dadaist joke that went viral. At a time online when brands have personalities and people manage themselves as extentions of a brand, it is amusing that the best micro-managed marketing on Instagram can be beaten by an egg.

On the other hand, the notion of a random image being popular on the internet is not unique. In January 2017, a photo of half an onion attempted to get more Twitter followers than President Trump, while there are a number of Instagram and Facebook accounts that post the same photo every day. As The Atlantic notes, these include @samepictureofatoaster, @samepictureofbrick, @samepicofplunger, @samephotooftaylorswift, and @samepicofanuggetdaily on Instagram.

Facebook, meanwhile, has numerous "The Same Picture" accounts that post identical content about British actor Barry Chuckle, a dog in tap shoes, Chris Pratt, Radiohead singer Thom Yorke, and more. As such, the punchline of a random photo of an egg claiming the top spot on Instagram is diminished somewhat when the concept is, arguably, tried and tested.

The egg is not the only viral post to beat a social media record. The Japanese billionaire Yusaku Maezawa, who SpaceX is sending to the moon in 2023, tweeted that he would share 100 million yen ($925,000) with 100 randomly selected people who retweeted him. The tweet gained 5.2 million retweets, which beat the previous record set by teenager Carter Wilkerson in April 2017, who received 3.6 million retweets when he asked for free chicken nuggets from Wendy's.

Adam Smith is the Contributing Editor for PCMag UK, and has written about technology for a number of publications including What Hi-Fi?, Stuff, WhatCulture, and MacFormat, reviewing smartphones, speakers, projectors, and all manner of weird tech. Always online, occasionally cromulent, you can follow him on Twitter @adamndsmith.