The real star of the new Google Earth, now on Chrome and Android, is Voyager, which the company calls 'a showcase of interactive guided tours.'

By Chandra Steele
April 19, 2017
This story originally appeared on PCMag

Ahead of Earth Day, Google has released a revamped version of Google Earth for Chrome and Android that aims to educate users about the world around them.

The real star of the new Google Earth is Voyager, which the company calls "a showcase of interactive guided tours." To kick things off, Google has teamed with NASA, the Jane Goodall Institute, the BBC and Sesame Workshop. Click the ship's wheel icon on Google Earth and you could wind up inside an Inuit igloo or checking out Hemingway's Hangouts.

Voyager currently has more than 50 stories, and more will be added weekly.

"It's a more emotional way to engage," Lilian Pintea, vice president of conservation science at the Jane Goodall Institute, said during a Tuesday launch event in New York. Pintea particularly appreciated that Voyager gives him a captivating way to spread a message of conservation and compassion. Delve into Tanzania's Gombe Natural Park, and you'll come across footage of chimpanzees displaying familial behavior not too different from that of humans.

Kevin Ward, who manages NASA's Earth Observatory, stressed that NASA is a space agency but also studies climate and geological change here on Earth. It acquires 14TB worth of data about the planet every day and it's using Voyager to share some of that through satellite images, photos from the ISS, and even images taken by astronauts themselves.

Explorers who have no particular direction can click the die on the left-hand side for Google Earth's new "I'm Feeling Lucky" mode, which will direct them to one of 20,000 locations selected by Google for its beauty, interest or educational value. Once there, a "Knowledge Card" will pop up with images, video and stories about where they've landed. If you find something interesting, click the Share option. 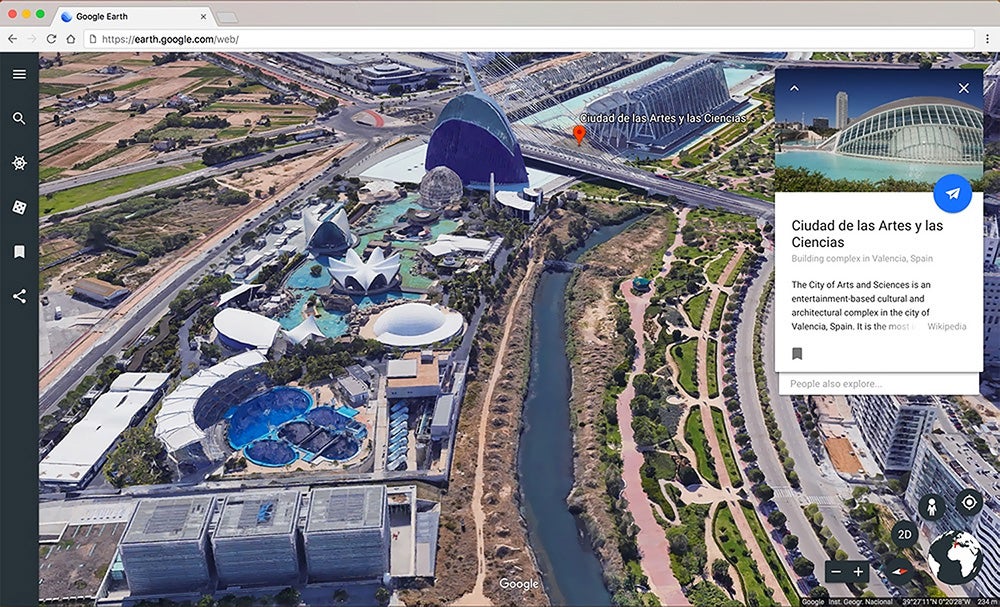 To dig deeper, click the 3D button on the bottom right to see a location from any angle. "Swoop around the Grand Canyon and see geological layers, or check out the majestic architecture and pristine grounds of the 500-year-old Château de Chambord in the Loire Valley in France," Google says.

Google Earth is already pretty immersive, but for those who'd like to take it a step further, today's update also enhances Google Earth VR to add search and support for Oculus Rift and Oculus Touch, in addition to the HTC Vive. Type in an address and fly around, walk the streets or change the time of day by moving the sun overhead closer to the horizon.

The update rolls out to Chrome and Android this week; look for it on iOS and other browsers "in the near future," or download Google Earth 7 for desktop.