Beyond tracking your viewing habits, purchases, and even location, companies are gathering all the stats they legally can, right down to your height, weight, hobbies, and pets.

London-based Clario—the antivirus that wants to be your friend—is also ready to help you take back some privacy, by pointing out which companies are tracking the most information about you. Not the usual tracking we're used to talking about, such as using cookies to follow where you visit online, what you buy, and then using that to show you targeted advertising (at best), though this ties into that. What Clario has done with its new infographic (the full version is below) is show you exactly the personal info all the social networks, online stores, streaming services, sharing services, and more are legally collecting about you, either when you sign up or over the course of time.

The company did this by creating 32 criteria for your personal data points and looking into what each service wants or expects you to share. The criteria include your email, full name but also your health, next of kin, mother's maiden name, and birth location. Some even want your height, weight, and health info—that goes for many fitness/health apps but also at least one finance app. A few want work-related info, such as your current salary and past work history. 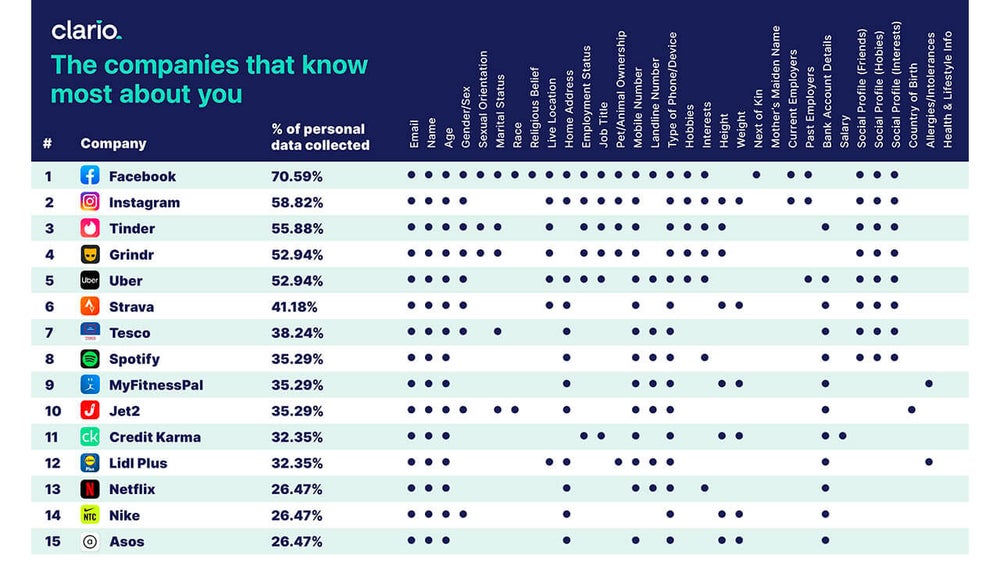 No one will be shocked to know that the worst offender is Facebook along with its subsidiary, Instagram. Of the 32 criteria Clario laid out as personal data points, Facebook collects as much as 70.59 percent. Naturally, this isn't just to make your social experience more personal; it also helps the company sell stuff to you. Insta is a little better, at 58.82 percent—it's not interested in your race, marital status, or sexual orientation, as Facebook is.

Maybe most shocking is that two dating/matching sites come next: Tinder and Grindr are in the number 3 and 4 slots. They don't ask for much that Facebook doesn't, except for height and bank account details (in Tinder's case), which I suppose some potential mates are going to want to know before they swipe right.

All four of them ask you about your pets. Take from that what you will. Airbnb does too, but probably with the goal to warn people about cat hair on the duvet.

Uber is at number 5, and likely includes info gathered for drivers and riders. The cycling/running tracking app Strava is at number 6. British grocery chain Tesco is number 7.

Retailers, even one as big as Amazon, aren't collecting as much as you'd think. Interestingly, Netflix gets more of your data (26.47 percent) than Amazon, eBay, PayPal, Ikea, and Walmart (which are all tied at 23.53 percent). Of the social networks, Whatsapp is lowest, at 11.76 percent; TikTok gets only 14.71 percent.

The list drops more and more personal criteria as you go down, but there are a few interesting bits of collection. Like the fact that CVS Pharmacy is the only company that wants to know your mom's maiden name. Considering how many times that personal info comes up as a security question on other sites, it's not cool. You'll also see that your health and lifestyle info is used by a few, including the NHS COVID-19 tracker (from Britain's National Health service), as well as the similar Protect Scotland. Obviously, the chart doesn't stick to North America—that's not where Clario lives.

Is Your Financial Advisor Right For You? Here's A Simple Test To See If It's Time To Move On.