How to Talk Pay and Negotiate a Better Salary

It can be a difficult subject to talk about -- but you've got to bring it up somehow.

Today, I'm lucky enough to work at Buffer, where our values and culture have led us to work toward creating a new way to think about compensation and value.

And as a result, this is now an area I've spent a lot of time thinking about, researching and asking questions about.

We don't really identify as "experts" of anything at Buffer (there's always so much more we can learn, and a beginner's mind is so much nicer) and I'm definitely not an expert in this area, but I am starting to feel more confident about thinking on worth, value and compensation.

Buffer has a value of "do the right thing," which means we try to pay enough so that teammates can focus on work and not worry about paying the bills. We also have a value of transparency, so we share everything openly, including our salaries and how they're calculated.

Equality wasn't the main reason for doing this at the time -- our founders just wanted to create a blueprint for others coming after them -- but it's my favorite side effect of transparency.

In this way, it helps not only us but also, we hope, other founders and potential employees -- especially women, people of color and other underrepresented groups.

Because I am not alone in doing a terrible job of negotiating: Women generally negotiate much less than men. 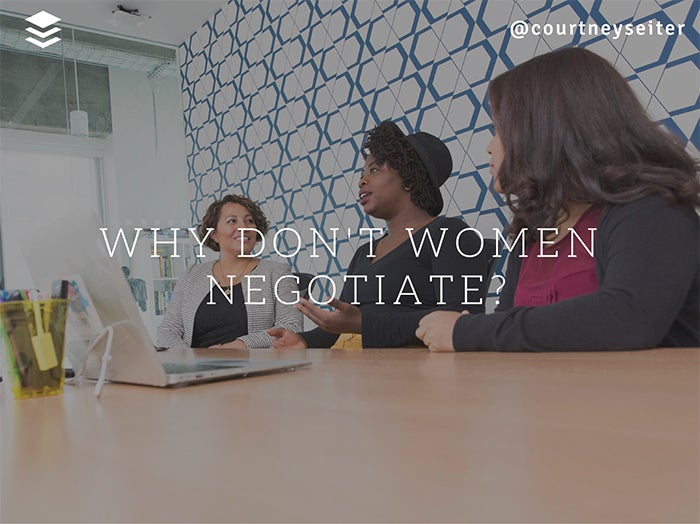 A study of graduating university students found that only 7 percent of female students attempted to negotiate an initial job offer as compared to 57 percent of men (Babcock & Laschever, 2003).

Especially because asking for a raise is another hurdle that can be tough for women. Another survey by Elle magazine found that 53 percent of women had never asked for a raise, compared with 40 percent of men. 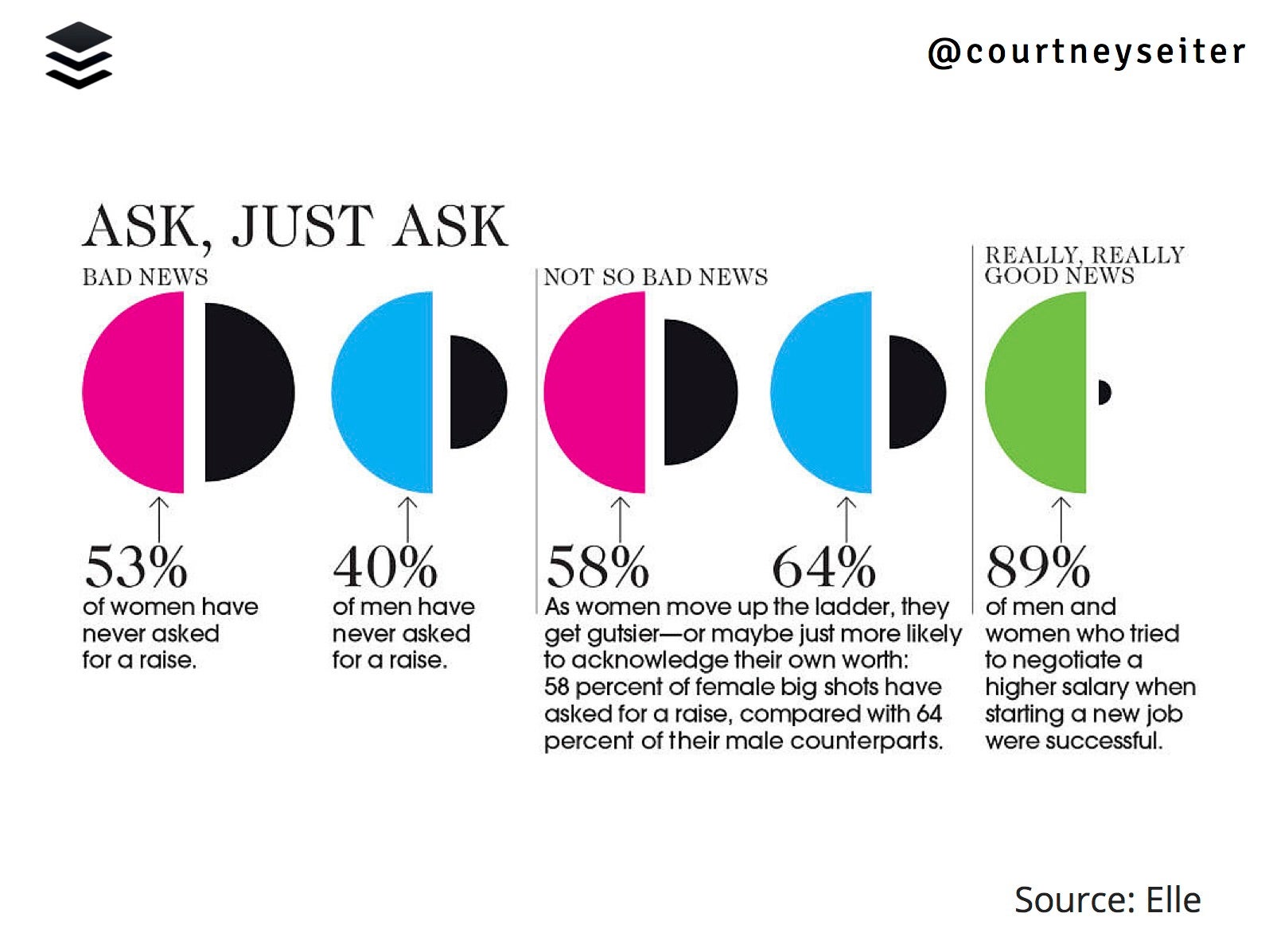 So why don't women negotiate job offers and ask for raises? Often women worry that asking for more money will look pushy or damage their image. Research shows we're right to have that concern.

Women who request either a raise or a higher starting salary are more likely than men to be perceived as greedy, demanding or just not very nice. Studies have shown that both male and female managers are less likely to want to work with women who negotiate during a job interview.

In one experiment by Linda Babcock, viewers watched videos of a man and a woman asking for a raise, using an identical script. Viewers liked the man and agreed that he should get a raise. The woman? She was successful in getting the money but viewers did not like her. They thought she was too demanding and aggressive. 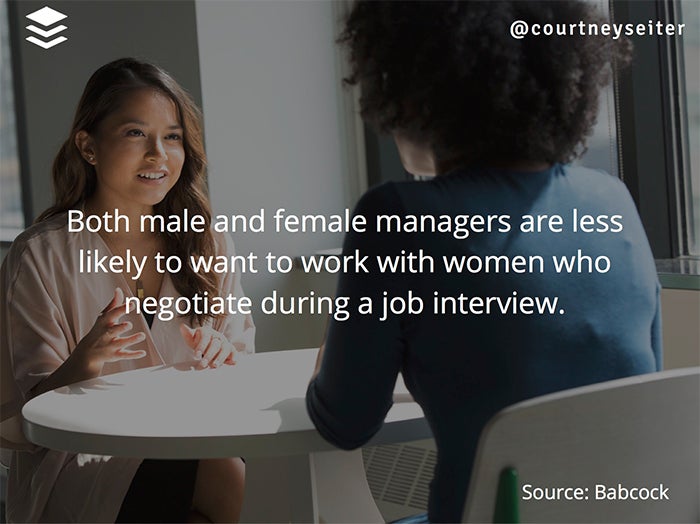 Additionally, there's a big cultural stigma in many places in the world attached to talking about money openly that can make things even more challenging.

How does transparency help?

All this has led us to where we are today: With more companies opening up their data and revealing unequal wages for the same work. 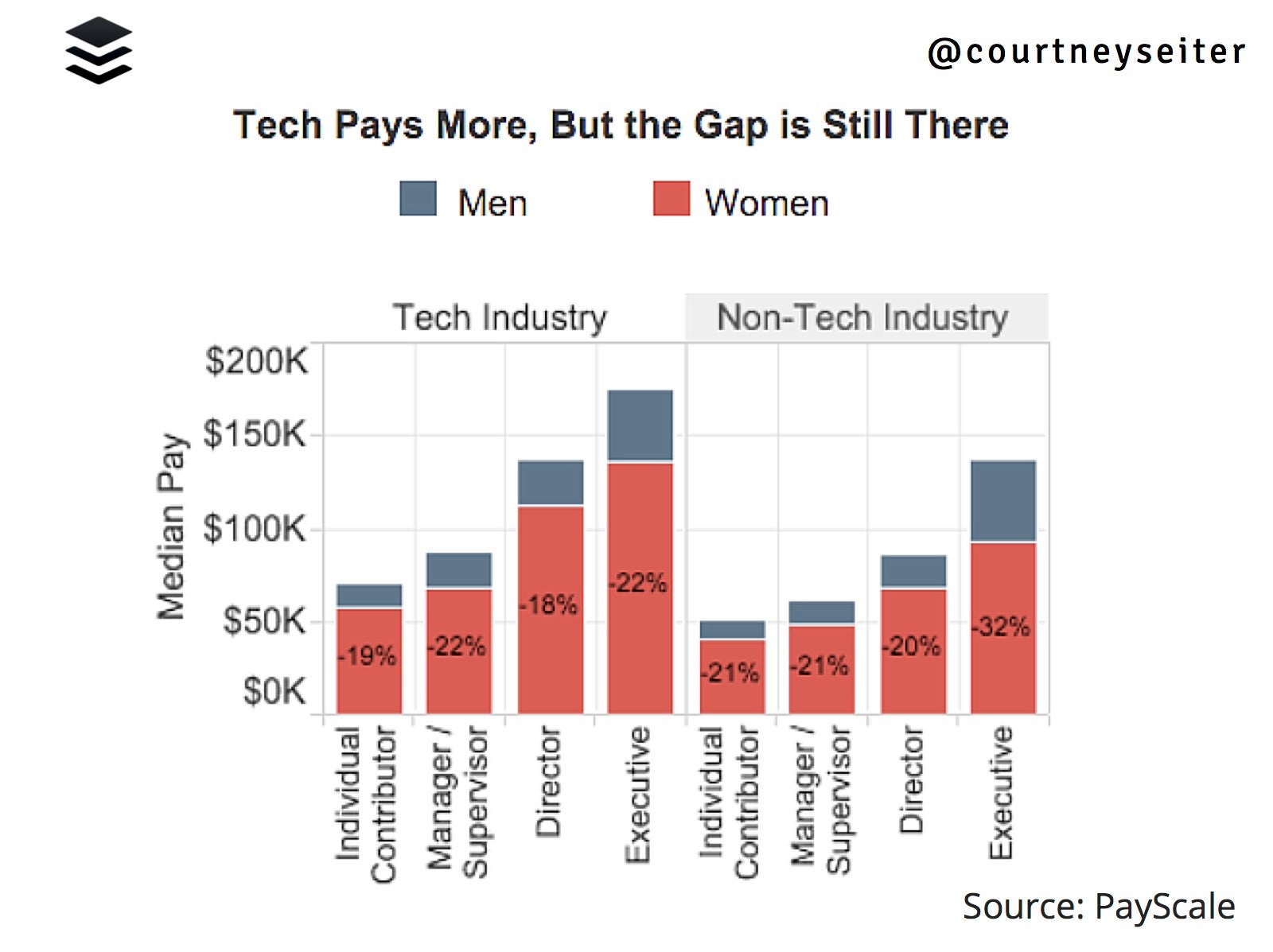 Tech companies like Pinterest, GoDaddy and Salesforce are all reviewing employee compensation data to root out gender wage gaps or other challenges to equal pay for equal work.

It's no wonder there is growing interest in the topic of pay transparency. 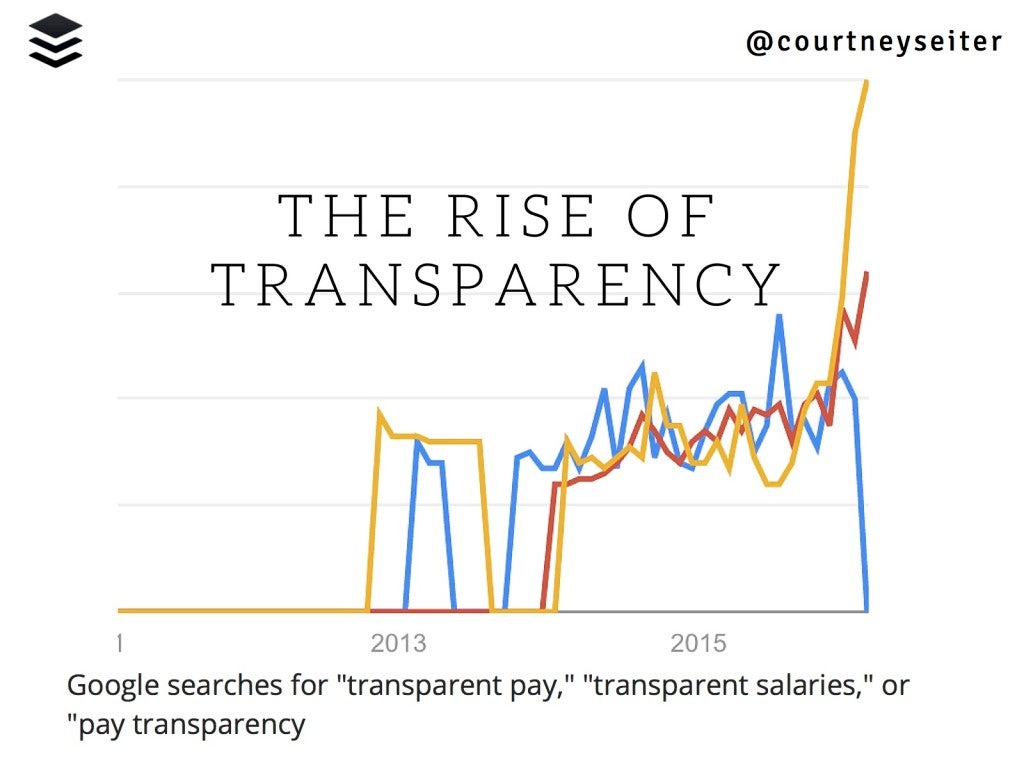 Since the beginning of Buffer, we've always tried to share all of our lessons and failures. Over time this has developed into one of the keystone values of the company. 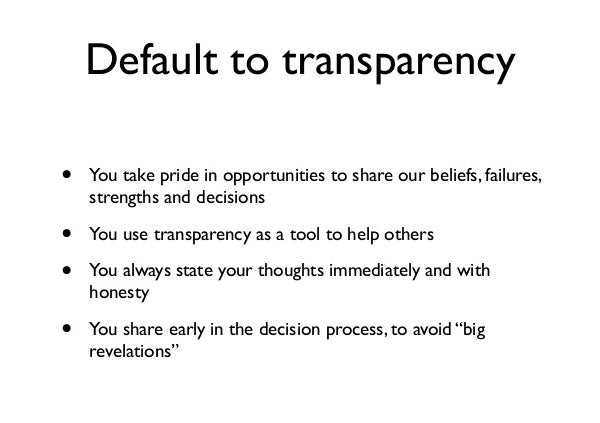 There are quite a few benefits of sharing as much as we can: We have more context and get more feedback on our decisions. We create more equality. And we've found that transparency is a great way to build trust in a team.

We've done a lot of experimenting and iterating to get to our current salary formula, which looks like this: 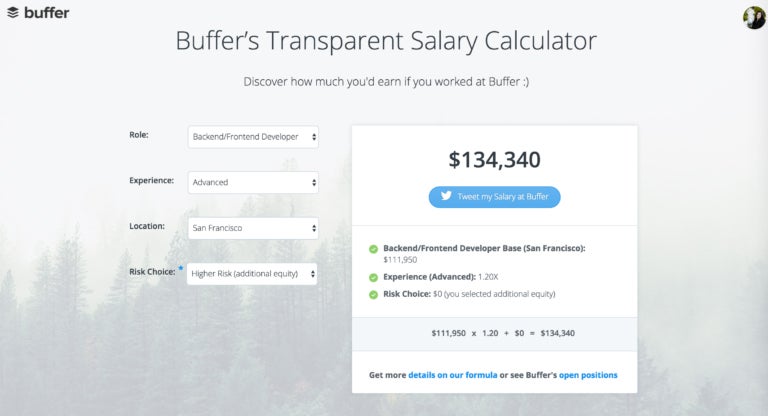 The formula is not perfect. We're always making changes, listening to feedback and evolving it. I'm sure there will be many more evolutions of the formula over time as we grow and share thoughts and challenges.

How to talk about salary

This might work great for us at Buffer, but we know open salaries are not a possibility for the vast majority of the work world.

Related: The Habits of Successful People

If you want to start a bigger conversation about worth and compensation, what do you do? What resources are available to you? Here are a few places to start: 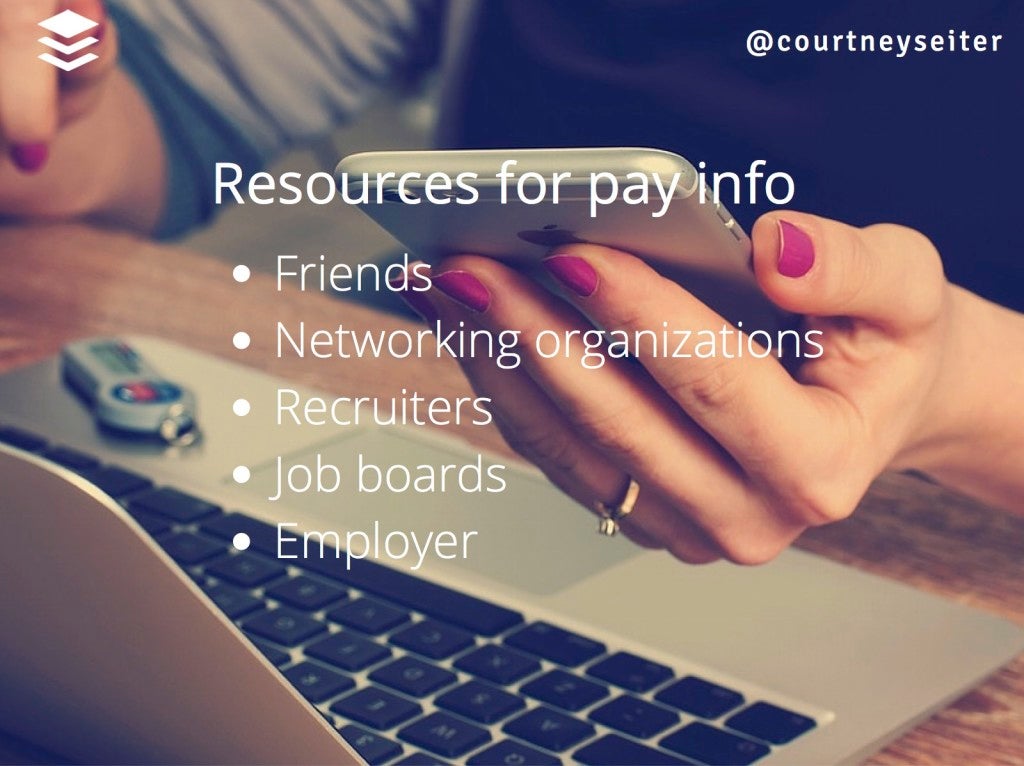 Additionally, there's a wealth of online resources, including salary calculators, anonymous reports about compensation and culture and lots more. Here are a few places to check out: 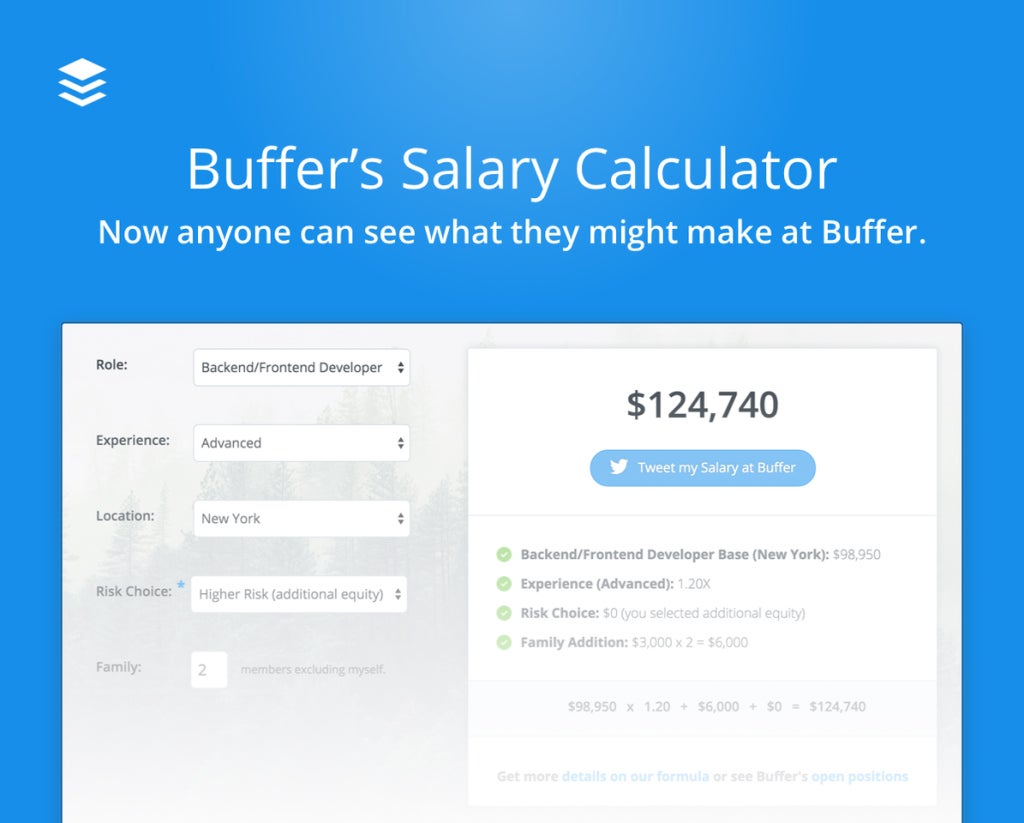 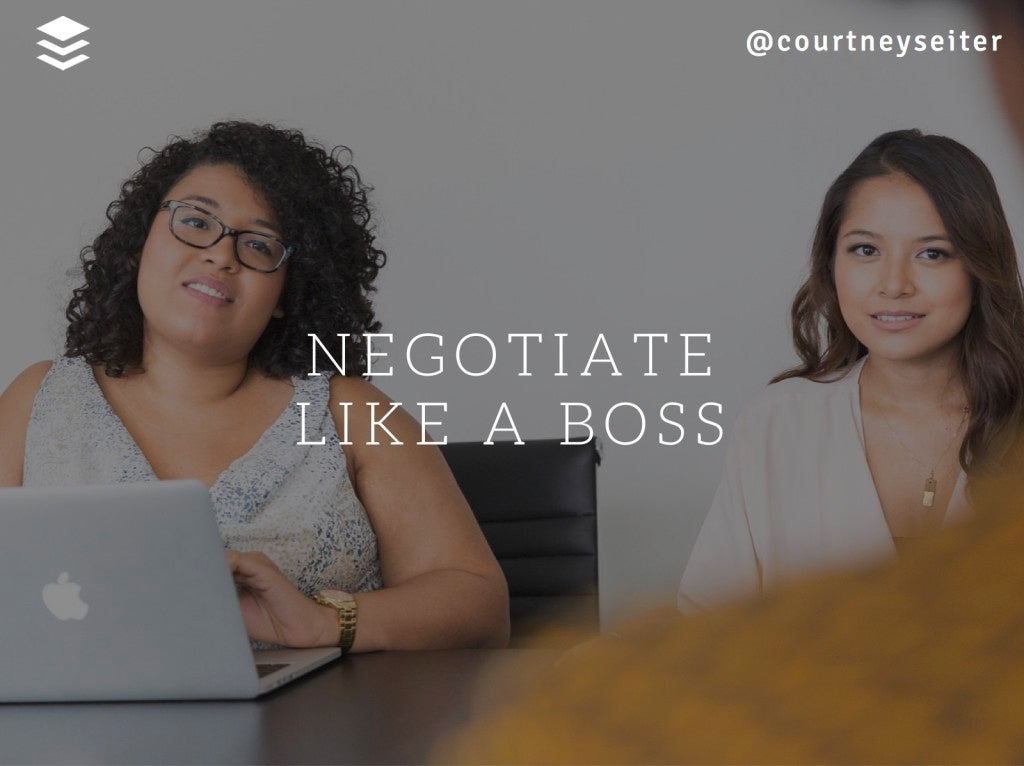 The better women are at negotiating (and the more often we do it), the more we'll start to break down the biases that create these pay disparities.

And if we don't? By not negotiating their job at the beginning of their career, women are leaving an estimated $1 million and $1.5 million on the table in lost earnings over their lifetime. 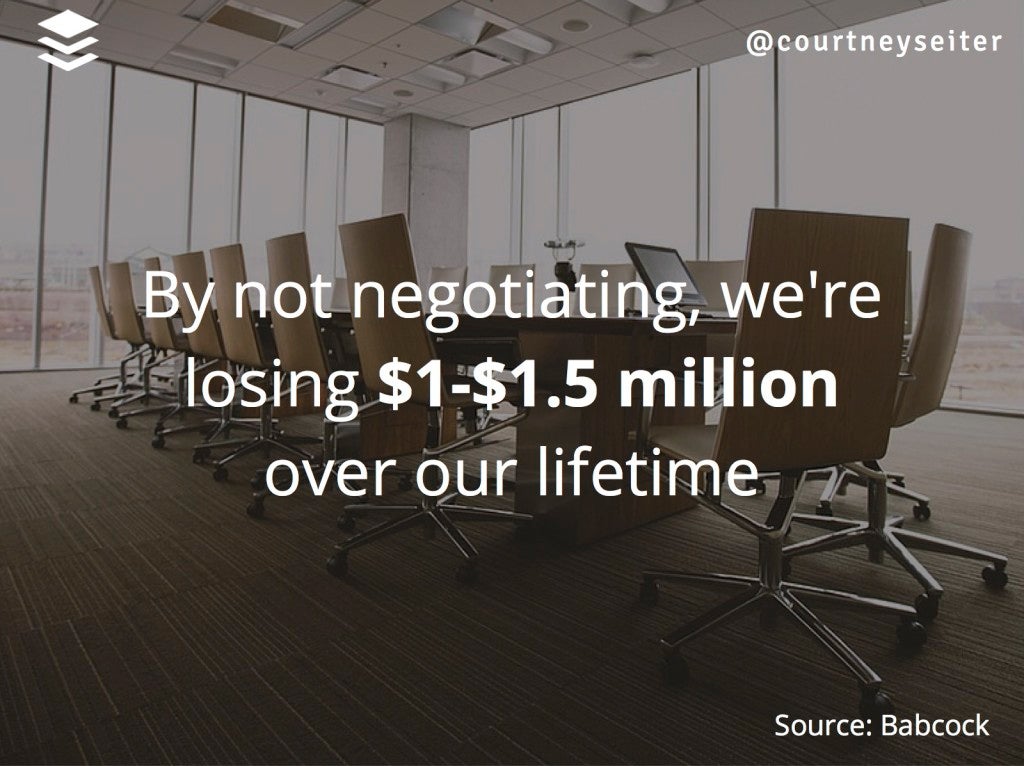 We can start by using these transparency resources to research and be informed on where you stand.

If you're interested in a new job or asking for a raise at your existing job, you can also ask yourself a few questions to be prepared to present your case on merit: 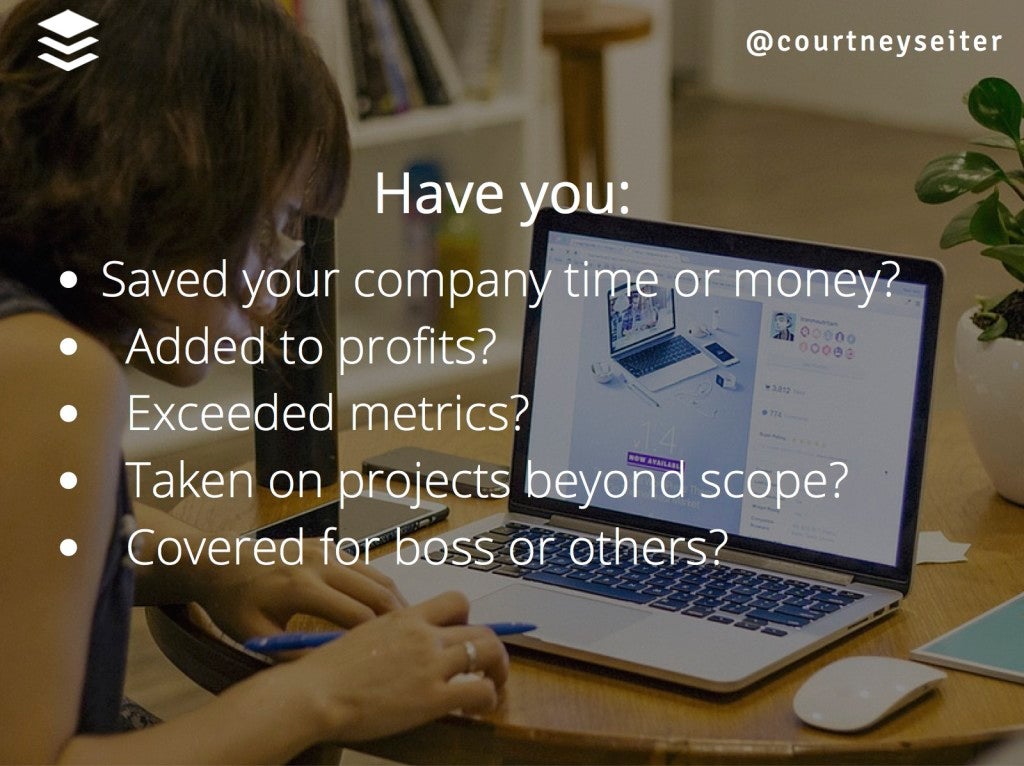 There are plenty of other negotiating tips out there, but there's one big one really stood out to me because it's specific to women: Make it about more than you. 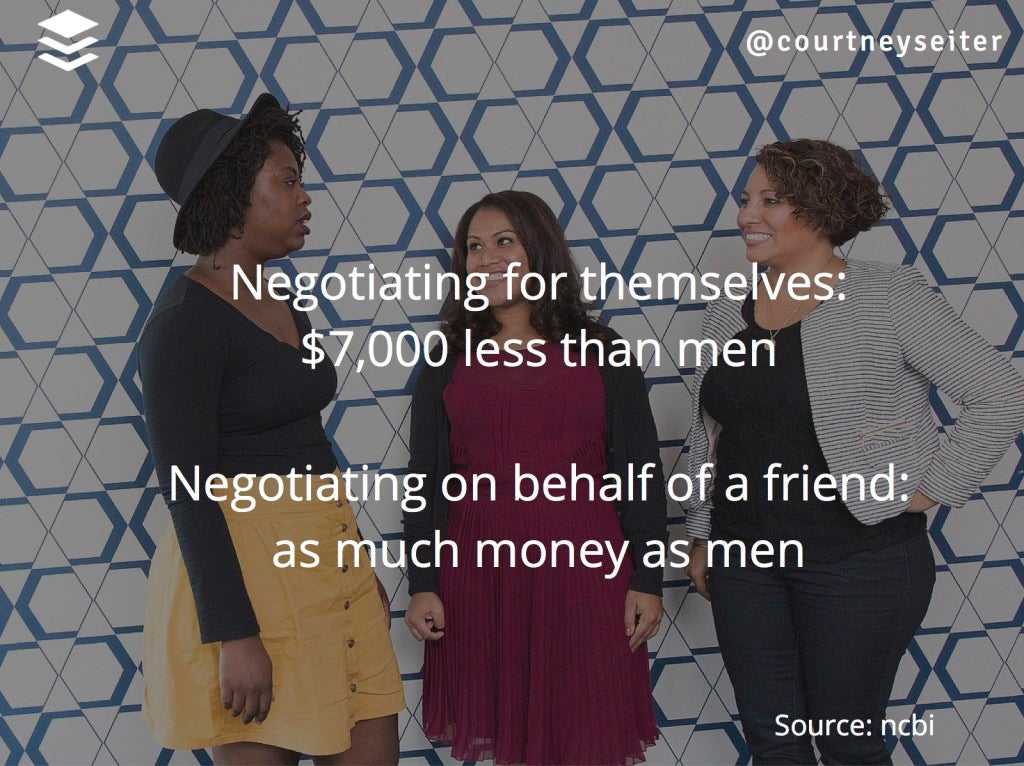 This is called "communal orientation" -- it's not about me, but what I can do for you -- and it can neutralize the negative consequences women can see when they negotiate. Often it's more acceptable for women to negotiate with others in mind because it creates an impression of caregiving.

Related: 6 Suggestions for an Aspiring Entrepreneur

When you're negotiating, it can work really well to think of the other people your salary supports and frame your case as supportive to the overall organization so the negotiation doesn't seem like it's all about you.