Who Is Bernard Arnault? What to Know About The Man Who Just Replaced Elon Musk as the World's Richest Person

Despite his staggering net worth, the 73-year-old entrepreneur just sold his private jet.

There's a new richest man in town, and this one would rather take people to the mall than to the moon.

Bernard Arnault, who owns 48% of the luxury fashion conglomerate LVMH, just displaced Elon Musk as the richest man in the world after the Tesla owner's fortune tumbled to $163.3 billion following his pricey Twitter acquisition, per Bloomberg. At one point, Musk's net worth sat at $340 billion.

The 73-year-old is the first person from Europe to claim the top spot.

While Arnault's vast estate is far less than what Musk's was at its peak, the entrepreneur has built quite an empire while living a relatively quiet life.

Who Is Bernard Arnault and What Is the LVMH Company?

Bernard Arnault's success story starts in Roubaix, France, where he was raised and began his career at his family's construction business, Ferret-Savinel, according to CNN.

After working his way up the ranks for several years, he invested in the textile group Boussac Saint-Freres in 1984, which was known for owning Christian Dior and was facing bankruptcy.

He set out to return the brand to profitability and take over the luxury retail market, especially after he bought LVMH in 1989, which was formed after the merger of Louis Vuitton and Moët Hennessy.

Since the purchase, Arnault has sat as the company's chairman and CEO and is still very much a part of the business today. LVMH currently owns 75 brands composed of wine, spirits, fashion, leather goods, perfumes, cosmetics, watches, jewelry, and luxury travel with 5,500 stores worldwide. In 2021, the company marked its biggest brand takeover ever with its $15.8 billion purchase of Tiffany & Co. Other notable brands in the group include Givenchy, Fendi, and Stella McCartney.

What Is Bernard Arnault's Net Worth?

Bernard Arnault's net worth sits comfortably at $170.8 billion, according to Bloomberg. However, the figure is slightly down $7.2 billion in 2022 as a result of tough economic markets and the fallout of the COVID-19 pandemic.

Despite acquiring a massive fortune, Arnault shows no signs of slowing down — LVMH lifted its CEO age limit from 75 to 80 in early 2022, insinuating he'll be sitting at the helm for at least another couple of years.

While Arnault has the wherewithal to live large, he appears to have chosen a low-key life. In fact, he recently sold LVMH's private jet after it was tracked on Twitter, per Bloomberg.

Arnault is also an avid art collector and has an estimated $10.3 billion in cash and other assets, according to the outlet. 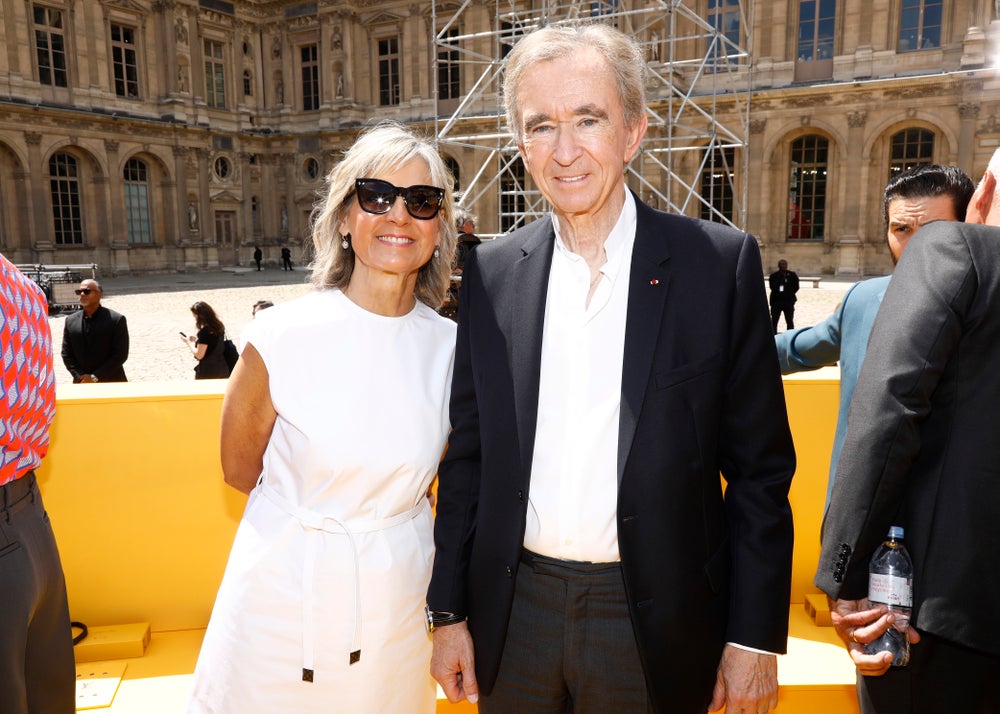 Who Is Bernard Arnault's Wife and Does He Have Children?

Bernard Arnault is the father of five children. He shares his two eldest kids, Delphine and Antoine, with his ex, Anne Dewavrin. He and his wife Hélène Mercier, who are still together, share three children: Alexandre, Frédéric, and Jean. All of his five children currently work for the family business, but daughter Delphine is seen as the "heiress" of LVMH, according to Insider, and she sits as executive vice president at Louis Vuitton.