Why Old Ideas Are a Secret Weapon

A series of explosions shook the city of St. Louis on March 16, 1972. The first building fell to the ground at 3 p.m. that afternoon. In the months that followed, more than 30 buildings would be turned to rubble.

The buildings that were destroyed were part of the now infamous housing project known as Pruitt-Igoe. When the Pruitt-Igoe housing project opened in 1954 it was believed to be a breakthrough in urban architecture. Spanning 57 acres across the north side of St. Louis, Pruitt-Igoe consisted of 33 high-rise buildings and provided nearly 3,000 new apartments to the surrounding population.

Pruitt-Igoe was designed with cutting-edge ideas from modern architecture. The designers emphasized green spaces and packed residents into high-rise towers with beautiful views of the surrounding city. The buildings employed skip-stop elevators, which only stopped at the first, fourth, seventh, and tenth floors. (Architects believed that forcing people to use the stairs would lessen the foot traffic and congestion in the building.) The buildings were outfitted with "unbreakable" lights that were covered in metal mesh and intended to reduce vandalism. The floors featured communal garbage chutes and large windows to brighten the corridors with natural light.

On paper, Pruitt-Igoe was a testament to modern engineering. In practice, the project was a disaster.

Once the troublemakers of the neighborhood heard that the light fixtures were supposedly unbreakable, they accepted the challenge and threw water on the lights until they overheated and burnt out.

Next, they busted the garbage chutes and shattered the windows. According to one report, the bright new corridors had so many broken windows that "it was possible to see straight through to the other side."

The St. Louis Housing Authority had planned to use rental incomes to pay for the maintenance of the buildings. In the years after the massive project opened, the population of St. Louis began to drop as people moved out of the city. With fewer tenants than expected and increasing rates of vandalism, the buildings were left unfixed.

Soon the modern design of Pruitt-Igoe began to accelerate its downfall. Suddenly, the skip-stop elevators became a danger to well-behaved citizens who were forced to walk through additional corridors and risky stairways just to get into and out of their apartments. As criminal activity rose, more things were broken, more people moved away, and less money came in.

In 1972, less than 20 years after the project had opened, the St. Louis Housing Authority scheduled a demolition and blew up the entire $36 million complex. 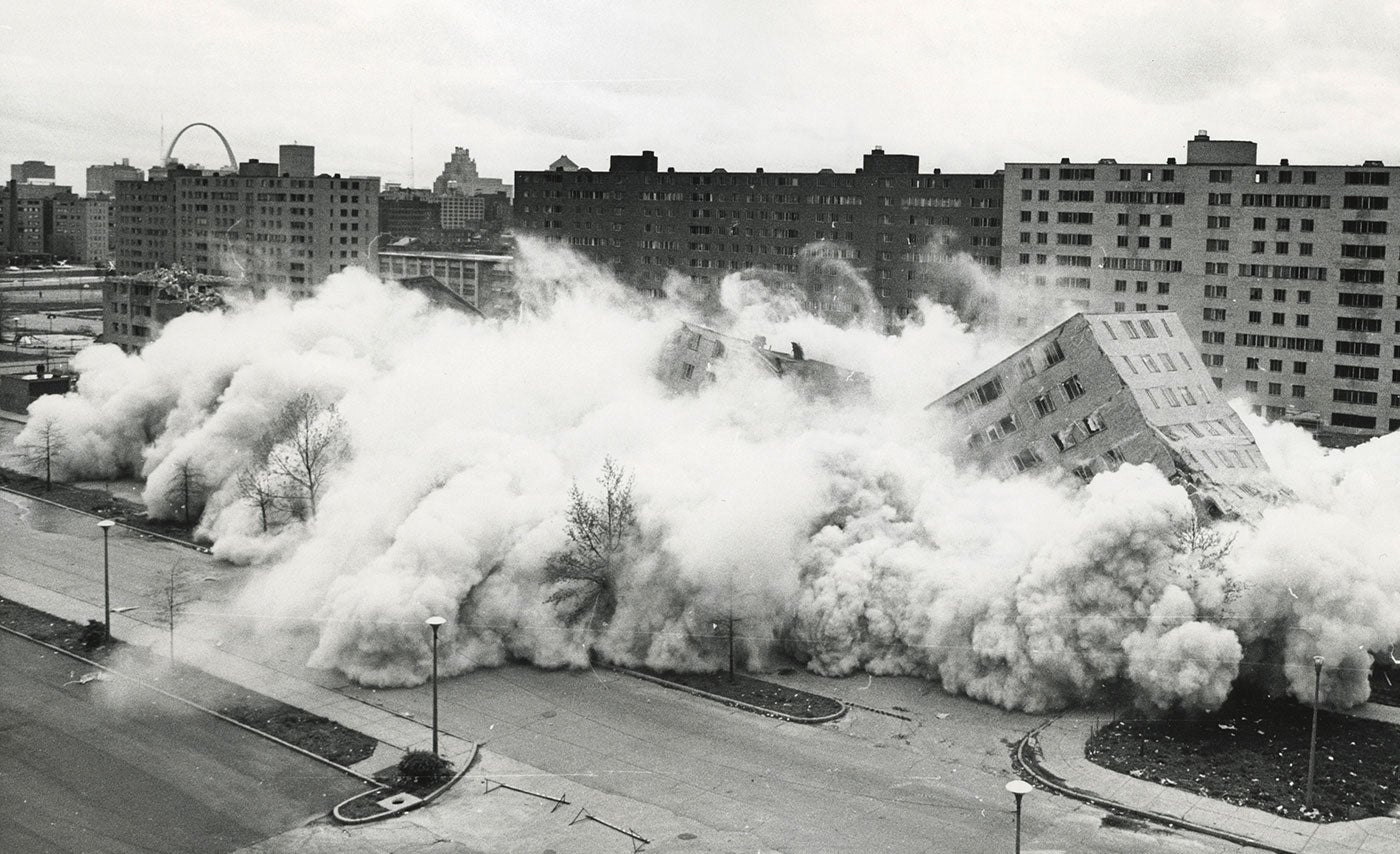 This iconic image of the Pruitt-Igoe demolition with the St. Louis arch in the background became a symbol of the failure of modern architecture and urban renewal.
Image Credit: U.S. Department of Housing and Urban Development

The sprawling 33-building, 57-acre layout of Pruitt-Igoe ignored the traditional knowledge about how cities grow and develop. Nearly every thriving and successful city on our planet was built organically and unpredictably. Buildings popped up as needed. City blocks expanded gradually.

There is a reason we tend to undervalue old ideas:

At first glance, we just see an idea that has been around for a long time. We incorrectly assume that familiar ideas provide average results. "Everyone does it this way, so it can't be that great … right?"

Fitness. Decades have seen the rise and fall of countless exercise fads. New training styles come into vogue, only to be replaced by another a few years later. In our quest to get fit we chase the latest and greatest offering even though boring fundamentals like lifting weights three times per week or going for a daily walk have outlasted all the previous fads.

Entrepreneurship. Simple fundamentals like making more sales calls can be the difference between success and failure as an entrepreneur. As Patrick McKenzie, CEO of Starfighter, says "Our secret weapon is patient execution of what everyone knows they should be doing, because that actually is a competitive barrier."

Reading. Half of this year's best-selling books are filled with ideas that may seem intelligent today, but will be proven wrong in the near future. Only a handful will still be read consistently a decade from now. These books—the ones that stand the test of time—are the ones you want to be reading because they are filled with ideas that last. This is why old books can provide incredible value.

The power of inherited knowledge

Is this evidence that we should abandon creative thinking and innovation in the name of sticking to the fundamentals? Of course not. But I do believe the Pruitt-Igoe story is one example of our tendency to undervalue inherited knowledge.

Furthermore, I'd like to propose that sometimes the creative thing to do is to actually practice the fundamentals more consistently than everyone else. Most people don't fully use the knowledge they already have. As I have written previously, "Everybody already knows that" is very different from "Everybody already does that."