What Sports Can Teach You About Running a Business

By Brandon Steiner
September 7, 2012
Opinions expressed by Entrepreneur contributors are their own. 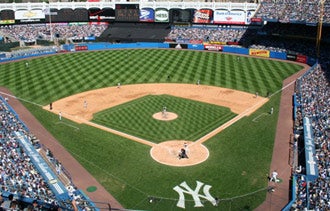 In his book You Gotta Have Balls: How a Kid from Brooklyn Started From Scratch, Bought Yankee Stadium, and Created a Sports Empire (John Wiley & Sons Inc., 2012), author Brandon Steiner details his journey from his first job at a fruit stand, to the founding of his sports marketing and memorabilia company, to his purchase of the old Yankee Stadium in 2008. In this edited excerpt, Steiner outlines the entrepreneurial lessons lessons learned during his life in sports.

When I coached my son Crosby's little league teams, I observed a vast array of motivational tactics on the part of the other coaches. Sometimes when a team was winning but its players were losing focus, the coach would implore them to imagine they were getting pummeled.

When a team has virtually no chance of winning, it becomes a great indicator of who the best players are. Who's still launching himself out of the batter's box, scrapping his way to first? Who's still diving for balls? Who's still getting dirty?

Those are the committed players, who realize that consistency over time equals credibility. The ones who know that to be successful, you have to give your all, whether you're winning or losing. The most successful athletes I know say, ''play the game, not the score.''

Derek Jeter is a perfect example. The Yankee captain plays hard during every inning, day in and day out, over the entire season. You can never tell what the score is from Derek's body language during a given game. Even in the last game of the season, you wouldn't know if the Yankees were headed to the playoffs or if they were in last place in the American League East.

Entrepreneurs, employees -- everyone -- should perform the same way.

When you walk into your office, can you tell whether it's nine in the morning or six at night? Is it the beginning of a promising quarter -- or is it the end of a bad month? Are employees' stock options riding a promising wave, or slogging through a trough? None of these factors should matter. A valuable employee will look like a valuable employee no matter the situation and circumstances. Consistency over time equals credibility.

Too many salespeople misunderstand the unique importance of consistency. They have a big sales day, and to celebrate, they buy themselves a big lunch. Then, they leave work early because they feel they've earned it.

The days when you have a big sale -- when you're riding a big wave -- are the ideal days to go for a second big sale, and possibly a third. In my experience, the best time to make more money is when you're already in the process of making money. It's like a batter on a hitting streak. He doesn't want to take a day off. He wants to ride that wave as long as he can.

In the hungry days at Steiner, our office was only two blocks from Madison Square Garden. My connections afforded me a lot of Knicks and Rangers tickets; many nights after work I'd go to a game. And on most of those nights, I couldn't go home after the final buzzer. I'd go from the Garden right back to the office. My company was exploding and I did whatever I could to ensure it continued on its upward trajectory.

Would you wake up every day at 5 a.m.? Would you regularly return to the office after an event at 11 p.m. on a weeknight? You might think you're giving 99 percent of yourself to something, but being all in means giving 100 percent. Either you're all in, or you're not.

Related: Motivating Employees to Work As Hard As You

Playing the score and not the game is also unwise on an intrapersonal level.Do as much as you can, for as many people as you can, as often as you can, without expecting anything in return. Don't worry about what you're getting back. Don't worry about how many dollars that person is going to equal for you. Being generous without keeping score strengthens your spirit, keeps you focused on the people who make your business what it is, and helps breed success.

I've always operated under this principle with the media. Back in the 1990s, when I was starting Steiner, the sports marketing industry was in its infancy. Even the journalists who were covering it didn't know too much about it. Whenever a reporter called me for a quote, guidance on a story, or to connect with the right person, I went out of my way to help.

I built a reputation as the guy who could get players on the phone with journalists -- which made their lives a heck of a lot easier. I'd do whatever I could to help. And you can be sure that I wasn't getting much in return. But I was accumulating credibility.

I became such a trusted source that my name, and in turn, my company and brand, ended up in the media quite often. In the first 16 years of Steiner Sports, I didn't spend more than $150,000 on advertising, promotion, and PR combined.

When you play the game, and not the score, you usually end up scoring more as a result.