Drew McClellan has carved out a thriving business sprucing up lawns as California closes in on its third driest year on record.

When Drew McClellan looks at brown, brittle grass, he sees an opportunity to make some green. As the Golden State closes in on its third driest year on record, the enterprising barber-turned-entrepreneur is cashing in on the catastrophic California drought, one parched lawn at a time. 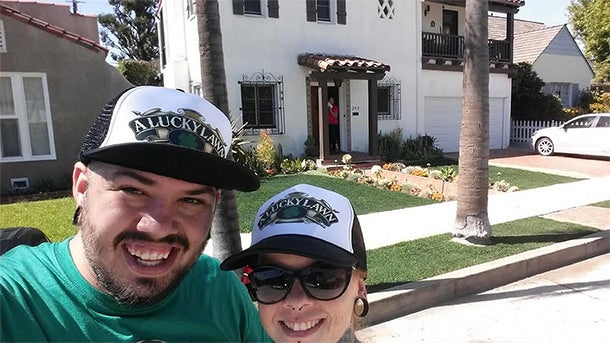 A Lucky Lawn couldn't have launched at a better time. Like just about everywhere else in the dehydrated 31st state, the bustling port city McClellan calls home is in the grips of a forced H2O lockdown. Residents in the smoggy seaside urban sprawl are only allowed to quench their thirsty lawns three times a week for 10-minute spurts tops. But, in dry, desperate times like these, McClellan says they shouldn't water them at all.

Related: An Easy Way to Get Publicity: Talk About the Weather

The slowly growing crop of rebels in town who don't are McClellan's ideal customers. Between shifts at 1246 Barber Shop & Shave Parlour downtown, the tattooed barber walks and drives through neighborhoods, scoping out burnt-out frontyard eyesores. He leaves handmade flyers soliciting his services on walkways and doorsteps.

McClellan, 29, has always had his eye on the green. As a kid back in his native Florida, he was used to seeing artificially emerald, sprayed-green golf courses and sports fields. But in 2007, when the real-estate bubble burst, he noticed realtors similarly greenwashing dried up lawns skirting foreclosures. Eventually, he says, spray painting brown grass green became the norm in the area. People in his home state even paint sun-bleached mulch to freshen it up, a service he may soon offer himself.

His childhood memories of faux gridiron-green came back to him when a buddy kvetched to him about his "drought-murdered" Long Beach lawn. (McClellan doesn't have his own lawn to fret over. He lives in an upstairs apartment with a balcony.)

Related: Starting a Business Can Be Like, Well, So Many Things

"I was just joking around and I was like, "Why don't you just paint it?'" he recalls. "Then [his friend] had a really blank stare. He'd never heard of it before and I was like, "No, I'm serious.'"

So McClellan scoured the Internet for local lawn-painting options for his friend. He came up cold and that's when the lightbulb went off: He had to do it himself. His buddy was his guinea pig, his first customer. Then came his barbershop customers, one after the other. But they didn't all come easy.

"I had to beg and offer crazy deals to get this side business going," he says, laughing, "like free haircuts if they didn't like how their lawn turned out. I had to basically convince my clients to let me do it."

And convince them he did, even earning their referrals and repeat business. Once people see how quickly and easily his Kelly green coating spruces up their yards, he says they usually sign up for additional spray jobs. The service sells itself.

"When I'm doing a job, pretty much all the neighbors come out. People driving down the street stop to see what I'm doing." The constant curiosity has gotten McClellan accustomed to working and marketing his work at the same time. "Everyone wants to know what I'm up to, so I spray and talk and I hand out cards and pamphlets and I explain the whole situation and what it is. If people don't see it actually happening, they think it's a crazy idea, so it's better this way."

His paint jobs -- applied in about an hour and a half using a spray nozzle attached to a jug of "100 percent nontoxic flower-based" liquid dye -- cost about $175 each for an average Greater Long Beach area front yard (which around 500 square feet, on average). Labor and supplies are included. A fresh coat takes about two hours or so to dry and won't fade away for up three months. Just like a haircut, if you don't like it, you won't have to live with it for long.

McClellan says the benefits of literally going green go beyond aesthetics. "It doesn't just look good. It protects existing and new growth and you won't need to wastefully water your grass to keep it looking fresh."

It also doesn't hurt to remind prospective customers that wasting water isn't something California takes lightly to -- and it's not cheap. Recently enacted statewide overwatering fines are $500 a pop per day.

"So this is a really good answer if you still want a nice lush, green lawn but want to avoid that fine and a water bill that keeps going up." It's a decent middle ground, he says, if you don't want to waste precious water and can't afford to tear out your lawn and xeriscape. A bright, sort of bizarre-looking middle ground sure to raise your neighbor's eyebrows and maybe even your property value, too.

To see A Lucky Lawn in action, check out the video below:

Related: 3 Reasons Not to Form a Company in California