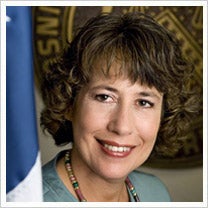 The Bush Administration today said it would begin a direct infusion of $250 billion into the American banking system in order to get credit lines flowing again. As part of the plan, "unlimited insurance coverage for non-interest-bearing deposit transaction accounts" will be instituted by the federal government, according to a Federal Deposit Insurance Corporation statement.The move is seen as direct relief for entrepreneurs using bank-based accounts to cover payroll.

"The FDIC is taking this unprecedented action because we have faith in our economy, our country and our banking system," states FDIC Chairman Sheila C. Bair (pictured).

The unlimited insurance is being offered to prevent turmoil and to encourage entrepreneurs to retain faith in their institutions instead of shopping around for banking. Those business owners who want to take part in the new FDIC protection will be charged a 75-basis-point fee. A 10-basis-point surcharge will be added to the bank's FDIC insurance bill as well. "The program will be funded through special fees and does not rely on taxpayer funding," Bair says.

The $250 billion infusion will be taken out of the recent $700 billion Wall Street rescue plan approved by Congress last week. The idea is to loosen up credit lines that trickle down to Main Street business owners while at the same time boosting investor confidence. About half of the money will go to major banks such as Citigroup, Wells Fargo and Bank of America, while the other portion will benefit smaller institutions. Participating banks must agree to limit executive pay, and they'll have to return a 5 percent dividend to taxpayers during the next five years.