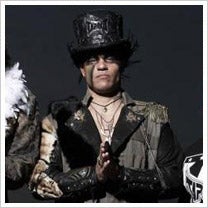 The collision happened about 12:57 a.m. when the 2004 Ferrari 360 Modena Lewis was driving apparently spun out of control and hit a light pole, according to Newport Beach police. Lewis might have been racing the driver of a 1977 Porsche, who stopped but allegedly fled. The Ferrari appeared to have been split in half. Police say they spotted 51-year-old Jeffrey David Kirby and a female passenger walking away from a white Porsche parked nearby. The man was arrested on suspicion of gross vehicular manslaughter while intoxicated. A female passenger in the Ferrari was hospitalized and said to be stable. Lewis was pronounced dead at the scene.

A statement attributed to "the TapouT family" was issued this afternoon: "It is with heavy hearts and great sadness that we must regretfully confirm the passing of our beloved friend, brother and co-founder Charles 'Mask' Lewis following a car accident that occurred last night. We are currently in the process of setting up a memorial service in his honor and will release more details as they become available. ... Many thanks to all for the outpouring of blessings and well-wishing during this incredibly difficult time."

In 1997, TapouT's founders started the brand by selling MMA-related T-shirts out of the trunk of a car. Lewis told Entrepreneur that the TapouT founders had been fans (and sometime organizers) of MMA fighting since its outlaw days in the early 1990s. "We would know where the underground fights are," he said.

In 2001, when Lorenzo and Frank Fertitta bought the Ultimate Fighting Championship organization, the brothers tapped the MMA expertise of the San Bernardino, California-based brand, and the two organizations have been connected ever since. Mask told Entrepreneur that the TapouT founders introduced star fighter Diego "The Nightmare" Sanchez, among others, to the UFC.

The reality shows Ultimate Fighter and TapouT share the same producers, and TapouT is the unofficial clothing brand of UFC (although UFC peddles its own gear as well).

Lewis and his two TapouT cohorts, known as Punkass and Skyscrape, brought pro-wrestling-style showmanship to MMA and were well known for their ringside appearances at MMA bouts. Mask was rarely seen without his telltale, Kiss-like makeup. The three often said that they were "ambassadors for the sport."

Lewis said that 2008 was a banner year for the company, with revenues exceeding $50 million and a new licensing deal with Skechers expected to produce even more income from a TapouT-branded shoe out this year.

"In the world of Nike and Adidas, we're the underdog," he said. "But we're making noise."