By Katherine Duncan
July 28, 2012
This story appears in the July 2012 issue of Entrepreneur. Subscribe » 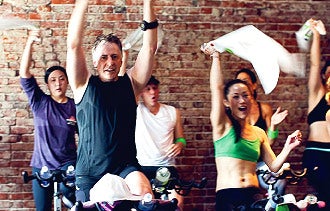 Gym-goers sweat it out at a YAS Fitness Center.
Photo courtesy of YAS fitness centers

Boutique health clubs are competing with established players like 24 Hour Fitness by coming up with unique takes on breaking a sweat. Here are four that are changing the way we work out.

YAS Fitness Centers. YAS--founded in 2001 by Kimberly Fowler, author of yoga guide The No Om Zone--offers an exclusive combination of yoga and indoor cycling. The signature class involves 30 minutes of spinning followed by 30 minutes of "Yoga for Athletes." Other classes add free weights for a more intense yoga session or raise the cycling component to burn more calories than any other type of cardio workout, according to the company. There are currently four locations in California.

KiwiSweat. A "pop-up" fitness service, KiwiSweat hosts limited-time yoga, kickboxing and spinning classes at inspiring locations throughout New York City. Events last from one day to four weeks; locations have included Chelsea Market, as well as galleries, warehouses and lofts. The variety is meant to combat workout monotony, while live musicians or DJs keep participants pumped. Details about upcoming pop-ups are released through Twitter and Facebook.

The Green Microgym. Green Microgym franchises are equipped with cardio machines that convert human energy into electricity to help power the electrical systems of the buildings in which they're housed. A vigorous workout results in an average of 50 watts--enough to operate 10 smartphones, according to the company, which claims that 36 percent of its electricity is generated by solar and human power. Other environmentally conscious features include the use of eco-friendly building construction materials, energy-efficient fans and all-natural cleaning supplies. The company, which says it uses 85 percent less energy per square foot than traditional gyms, has three locations in Oregon.

Alpha Venice. Fitness trainer Joselynne Boschen partnered with Nike to open the first gym designed for Nike Training Club (NTC) classes. Launched last year in Venice, Calif., the 3,200-square-foot club is packed with high-tech features: Members check in with a finger scan and can purchase gear by scanning QR codes with an iPad. Fitness instructors display workouts from the NTC training app on 70-inch LCD touchscreens during classes--bringing the app to life in a real gym setting. The screen also features a digital jukebox for members to create pre-class playlists. The company hopes to open an East Coast location in the next year.

Corrections & Amplifications: An earlier version of this article described YAS as a franchise. The company is no longer offering franchising opportunities.