There's Something Strangely Soothing About This Silly Key Ring on Kickstarter 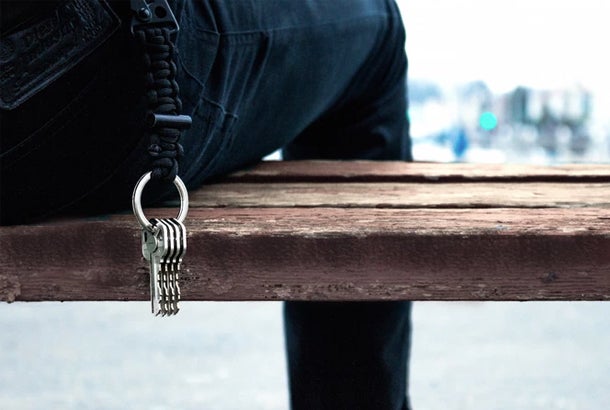 Does the metallic clink of keys clanging together drive you batty? Well, the noisy buggers sure rattle Vince Ho's cage. So much so that the Huntington Beach, Calif., product designer invented a clever key ring solution that quietly puts keys in their place. Pet peeve crushed.

Related: The Smithsonian and Kickstarter Partner Up to Preserve Neil Armstrong's Spacesuit

You simply stick the included positive and negative magnetic adhesives on the tops your existing metal home and car keys, then slide them onto the special key ring. And -- voila, in one satisfying thwack -- all of your loose keys that would otherwise annoyingly rattle magically (technically magnetically) band together. With no room to wiggle, they're noisy no more, neatly and silently stuck together in a row.

"Everyone's got something they want to fix about the world," Ho writes on MagKey's Kickstarter page, "for me it was noisy keys. After months of prototyping different key holders -- I had an epiphany! Why not use magnets?" Yeah, why not? It works like a charm.

Ho's brand new key-quieting system is already off to a strong start. It's killing it on Kickstarter right now, blazing past his $15,000 goal with 20 days to go. Some $63,000 in pledges for MagKey are locked up so far. Plenty of 4-packs of the lightweight product are still available via the crowdfunding campaign, starting at just $10.

MagKey isn't Ho's first roll of the entrepreneurial dice. In 2013, having recently graduated from UCLA, the Huntington Beach, Calif., native and his then-roommate and fraternity brother, fellow Bruin David Mangold, revved up their first food truck. After a year on the road, the rolling boba tea shop was so successful that the duo decided to hang up their noisy food truck keys for good. Bankrolled by a businessman in China, they made the leap to brick-and-mortar. The result: Koala Tapioca, a buzzy Korean-Mexican fusion bistro in the heart of Westwood Village, their old college stomping grounds. Key to the menu, of course, are gobs of boba, the gooey, chewy tapioca balls young Southern Californians can't seem to slurp up straws enough.

Ho, whose parents wanted him to become a lawyer, can't seem to kick the entrepreneurial bug.

"(Business) is one of those things where you could put in 15 hours and not even notice," Ho recently said. "It becomes your baby."

Ah, the force is strong in this one. MagKey may be Ho's first project on Kickstarter, but we doubt it'll be his last. We'll have to wait and see. (We reached out to Ho to find out what he plans to do next, but have yet to hear back from him.)