From Poverty To Prosperity

"I got my start by giving myself a start."-Madam C.J. Walker 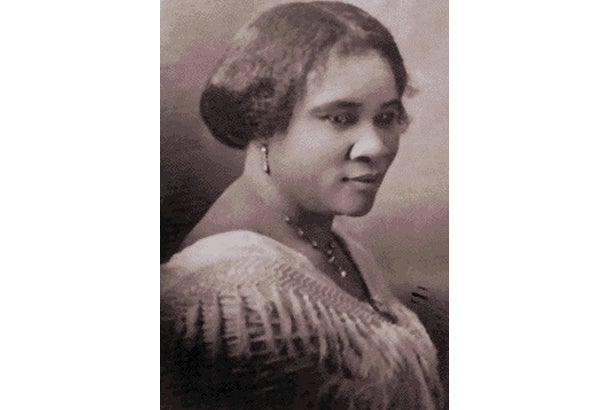 Many of the 20th century's most influential entrepreneurs overcame tremendous odds in their quests for success. But none faced greater obstacles than Madam C.J. Walker. The daughter of former slaves, she was orphaned at the age of 7, married at 14, a mother at 17 and a widow at 20. Yet she was determined to build a better life for herself and her daughter. Starting with a meager investment of only $1.50, she built one of the most successful black-owned businesses of the early 20th century and became the nation's first woman self-made millionaire.

Walker was born Sarah Breedlove on December 23, 1867. Her parents were sharecroppers on the sprawling Burney cotton plantation in Delta, Louisiana, and like most children of her time, Sarah went to work in the cotton fields at an early age. After her parents died during a severe outbreak of yellow fever, Sarah moved to Vicksburg, Mississippi, to live with her siste, Louvenia. But the arrangement proved to be less than ideal. According to Sarah, Louvenia's husband was "a cruel and contemptuous scoundrel" who treated her terribly. To escape his tyranny, Sarah married a Vicksburg laborer named Moses McWilliams when she was only 14.

On June 6, 1885, Sarah gave birth to a daughter named Lelia. She believed that if she worked hard enough, she could provide her daughter with a better life than she had. Tragically, shortly after Lelia's second birthday, Moses was killed in an accident. At age 20, now a widow and a single mother, Sarah moved to St. Louis, where she worked as a laundress for $1.50 per day for the next 18 years. Working up to 14 hours per day, she scrimped and saved until she had enough money to send Lelia to Knoxville College.

By the time she was in her late 30s, Sarah's hair had started falling out, due to a combination of stress and years of using damaging hair-care products. She was not alone. In fact, most black women of the time experienced the same problem, but there were no hair-care products on the market to correct it. She tried everything that was available, but met with little success, so she started experimenting with her own hair-care products.

Her big break came in 1905, when, as she would later tell a reporter, "I had a dream, and in that dream a big black man appeared to me and told me what to mix up for my hair. Some of the remedy was grown in Africa, but I sent for it, mixed it, put it on my scalp, and in a few weeks my hair was coming in faster than it had ever fallen out. I tried it on my friends; it helped them. I made up my mind I would begin to sell it."

Starting with a few dollars' worth of chemicals, Sarah mixed batches of her products in her washtub and began selling them door to door to friends and neighbors. A natural marketer, Sarah pushed her products by giving free demonstrations. This technique worked, and black women throughout St. Louis began buying her wares with enthusiasm. It was about this time that Sarah received word that her brother had died, leaving a widow and four daughters in Denver. She decided to move to Denver to help out. There, she continued selling her products door to door with tremendous success.

Shortly after she arrived in Denver, Sarah married newspaperman C.J. Walker and adopted Madam C.J. Walker as her professional name. With help from her husband, she began running advertisements in black newspapers and quickly developed a thriving mail order business. After graduating from college, Lelia moved to Denver to help with the family venture, and before long, the Walkers were bringing in $10 per week-which was quite a lot of money at that time. C.J. decided that the business had reached its full potential. His wife disagreed. She believed that black women across the country would be interested in her products, if only they knew about them. Leaving Lelia in charge of the mail order buisness, Walker embarked on an extended sales tour throughout the southern United States. Within a few months, she was making weekly sales of $35-more than twice the salary of the average white American male worker and 20 times that of the average black woman worker.

Realizing that she could only do so much selling herself, Walker recruited and trained a team of door-to-door saleswomen to demonstrate and take orders for her products-much like Avon and Mary Kay Cosmetics would do decades later. With a team of trained saleswomen crisscrossing the country, Walker's company grew rapidly. In 1908, she expanded into the East, establishing a business office in Pittsburgh. Two years later, she built a large manufacturing plant in Indianapolis that would eventually employ more than 3,000 people.

By 1917, the Madam C.J. Walker Manufacturing Co. had become black America's most successful business and Madam C.J. Walker, America's first self-made woman millionaire. To celebrate her success, she commissioned black architect Vertner Tandy to design and build a lavish mansion for her on the Hudson River in Irvington, New York. Sadly, she was unable to enjoy her new home for long. For several years, Walker had been experiencing problems with high blood pressure. Her doctors advised her to take it easy, but Walker could not-or would not-slow down her hectic pace. Long years of traveling and hard work finally took their toll. On May 25, 1919, Walker died of kidney failure resulting from hypertension.

A woman of extraordinary courage and vision, Madam C.J. Walker blazed the trail for the generations of women entrepreneurs that would follow her. The grit and determination that carried her from a cotton field to a mansion, from abject poverty to riches, remain a burning inspiration for Americans of all races who yearn to realize their dream of achieving a better life.

Remembering Her Roots
As Madam C.J. Walker's fortune grew, so did her desire to help others. Although she was uneducated herself, she used much of her wealth to help others receive what she had lacked, establishing scholarships at several black women's schools and colleges as well as making generous donations to the National Association for the Advancement of Colored People (NAACP), the YMCA and various other charitable organizations.

Cosmetics Crusader
Madam C.J. Walker saw her innovative line of beauty products and techniques as more than just a way to make money-she saw it as a way to help other black women achieve their full potential. By training and recruiting scores of "Walker Agents" to sell her products, she enabled literally thousands of black women to go into business for themselves at a time when the best most could hope for were menial jobs for low pay.