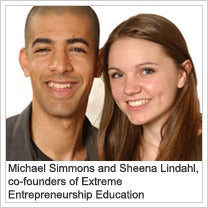 When he was 16 years old, Michael Simmons (now 29) and his friend Calvin Newport were the only students in their high school with a business -- a web development company called Princeton WebSolutions. Next, college student Simmons wrote a book -- The Student Success Manifesto.

That, in turn, led to a variety of speaking engagements, which served as the catalyst for Simmons' most successful business venture, Extreme Entrepreneurship Tours, or EET. The company, founded by Simmons and his wife, Sheena Lindahl, in 2006, is designed to encourage entrepreneurship among young people in high school and college.

"We bring the country's top young entrepreneurs across the country to different college campuses at half-day conferences," Simmons explains. The colleges tend to be campuses that don't yet offer entrepreneurship courses or are just beginning to do so. EET did between 90 and 100 events last year, and the company has even more ambitious plans this year.

The company is now rebranding as Extreme Entrepreneurship Education, with new offerings intended to take participants beyond the initial inspiration provided by the tour.

The company recently added what Simmons calls "a virtual business incubator," which connects students with mentors and coaches, and introduces goals and actions designed to move their business forward. "This is a system to help people overcome their fears and make progress on a day-to-day basis," Simmons says.

There's also a virtual speaker series, featuring interviews with top entrepreneurs, for use in a classroom setting. Ten schools signed up during the initial launch, and more than 100 others have expressed an interest in signing on.

Next up: a Future of Entrepreneurship Education Summit at the University of Central Florida on Friday, Feb. 18. Simmons envisions the summit as the entrepreneurial version of the Clinton Global Initiative, which convenes global leaders to devise and implement innovative solutions to some of the world's most pressing challenges.

According to Simmons, the summit will fulfill an important need in the field. "Part of the goal is to showcase the most innovative things taking place in the field." The other is to build a bridge linking all the giants in the field. "It's amazing what's come together in the five or six weeks," he says. "It shows how much people want to connect with each other, and how timely this idea is."

Corrections & Amplifications: An earlier version of this post said that Priceline.com founder Jay Walker would be at the conference. He will not be in attendance.