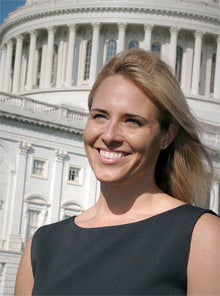 Marci Harris, CEO of Popvox, explains why the online advocacy and legislative data platform turned to crowdfunding site appbackr to finance its mobile offering for members of Congress.

When the U.S. House of Representatives began allowing members to use iPads on the House floor this year, Marci Harris saw an opportunity. The CEO of Popvox, a nonpartisan platform for advocacy and legislative data, believed that if she and her team could create a mobile version of Popvox for Congress to use, they could greatly increase their website's usefulness and reach.

But with no viable way to finance their app, the Popvox crew took a shot on appbackr, a crowdfunding site that lets individuals invest in mobile applications. Developers get immediate funds they can use to bring their app to market, and investors profit when the finished product sells in retail app stores. Within two months of posting their app in the appbackr marketplace, Popvox had raised the five figures needed to get their mobile project off the ground.

Harris filled us in on the app, the appbackr experience and what it means for startups:

Popvox allows individuals to tell Congress what they think about the bills they're voting on. We have organizations uploading their positions and sending their members to take action there, and we have users in every congressional district. It's becoming a vibrant community.

We took some early family investment and were fortunate to get seed money and advice from Tim O'Reilly, founder and CEO of O'Reilly Media and Gov 2.0 advocate. We started coding in July of last year and released a beta in November, just before the election. We're definitely sticking to the lean startup principles of putting out the minimum viable product, listening to what users have to say and building on what we've learned.

The Popvox app that we're developing is a dashboard Congress can use when they're on the House floor taking a vote. It shows them what their constituents and colleagues are saying about the proposed legislation in an organized format.

Because we're bootstrapping, we wouldn't have had the money in our general business fund for this application. So I looked into crowdfunding sites. I knew appbackr from their win at the Silicon Valley Association of Startup Entrepreneurs competition, because one of the first things we did as a company was enter that. I remembered appbackr's presentation and thought it was a really cool approach.

We ran our appbackr fundraiser for about two months. Most of our outreach took place on Twitter. It's amazing how, when people believe in your product, they step up to the plate and help you make it happen. Through appbackr, we raised over $30,000 from 30 different investors, including $5,000 from appbackr's App Catalyst Fund, a scholarship-like program to help seed fundraising for some of the applications on the site.

We are currently in development and hope to have an app in the halls of Congress this month. This wouldn't have happened without the crowdfunding.

I think appbackr is really reflective of the democratization of the startup process. These applications don't cost that much to fund. For lots of people with good ideas, maybe they can't get a bank loan or they've already maxed out their credit cards, but it doesn't make sense for them to go to an angel funder or a venture capitalist.

This is an amazing fundraising mechanism that can open many doors--it means that entrepreneurs don't have to move to Silicon Valley and pitch big-name venture capitalists to get their projects going. --As told to Michelle Goodman

The 6 Best Ways for Solopreneurs to Manage their Books

4 Reasons Why You Shouldn't Delegate Your Company's Finances

The 8 Most Common Areas of Overspending in Business