Startups Born from a Passion for Sports

There's at least one reason U.S. sports-related businesses are projected to generate more than $420 billion this year: Passion. In Boston, for instance, die-hard Red Sox fans have helped the team achieve a Major League Baseball record for selling out Fenway Park more than 700 consecutive regular season games in the past nine years. In football, extreme numbers of fans tune into the Super Bowl championship game, making it by far the most-watched single-telecast in the U.S. each year.

Team owners and players aren't the only ones raking in bucks from the booming business of sports. Equipment manufacturers, memorabilia retailers, ticket vendors and other businesses large and small are taking a bite out of the market, too.

"The space sees ebb and flow among various categories and is very competitive, but there is ample opportunity for innovative companies in many sectors," says Sean Clemens, a senior analyst with Los Angeles-based boutique sports investment bank Park Lane. Two segments in the industry that have experienced notable growth in recent years include online gaming and sports-based digital and social media, he says.

From a football card game, to a mobile application for fans, here's a look at three startups that were born from a passion for sports. 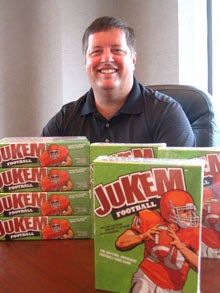 Jeff Spelman is an entrepreneur who proves that, sometimes, business ideas can be born from life's most common challenges. In 2007, the Cincinnati native wanted to come up with a creative way to connect with his 7-year-old son who needed extra help learning basic math. Spelman, a longtime sports scout, turned to football for his answer.

Instead of signing his son up for a youth football league, Spelman went to work creating a card game based on the sport. "There's a lot of math hidden in the game," says Spelman, who is 45. "I knew my son needed to learn to count in multiples of 5s and 10s. A 100-yard football field is a perfect learning environment for that."

By 2008, Spelman had developed a game he later called Jukem, named after a play for which an offensive player 'jukes' a defender by faking one way but going another. The objective of the game is to outscore your opponent by using a combination of offensive cards to score touchdowns and field goals.

Related: What You Can Learn from Super Bowl Ads

With zero retail connections, one of Spelman's biggest challenges was getting retail stores to sell the game. His wife, Michelle, spent six months meeting with individual store owners. By 2009, when the game was brought to market, it was being sold in more than 60 stores in five states. At $14.99, Jukem's distribution has grown to more than 275 stores in 30 states. Spelman projects this year's revenues will be about $280,000.

Spelman's next move is to develop customized versions of Jukem for college and high-school sports programs. "People love football on all levels," he says. "Jukem is another way to experience their favorite game." 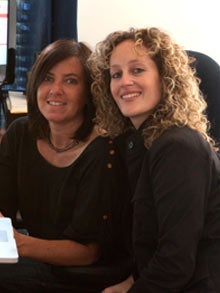 Houston, we have a problem. In 2009, Kaylyn Thornal was traveling the U.S., producing a national TV series when she stopped over in Texas' largest city. But when she and her crew set off in search of good food and drinks before heading off to an Astros baseball game, the weary out-of-towners didn't know where to look.

"We wanted to go where the locals go -- to real insider hangouts," says Thornal, who is 43. They tried asking a hotel concierge, ticket scalpers and people on the street, but no one had any recommendations.

After experiencing a similar dilemma the next summer at a Giants game in San Francisco, Thornal decided to create a solution. Armed with about $300,000 in seed money collected from friends and family, she founded Los Angeles-based startup KAT Apps & Technology.

Co-founder and creative director Natasha Bedu joined the company and helped Thornal shape the vision for a website and mobile application providing sports fans with insider advice on where to find the best food and drinks, affordable parking, last-minute tickets and related information for sports venues around the U.S. They hired a web developer, a marketing and business development consultant, as well as contributing writers from various cities to create the content.

The site and app, which they call Fanzooloo, launched in April. Thornal says the website has received more than a million page views, and unique visitors double monthly. Thornal and Bedu are considering several revenue models, including a paid membership system offering premium content.

So far, scaling the business has been a challenge. "We're moving faster than I imagined," Thornal says. "I barely have enough time to see my friends, talk to my family or walk my dogs. But keeping up with it is fun. When we meet people at a game and they tell us they how much they like what we're doing, it makes everything worthwhile." 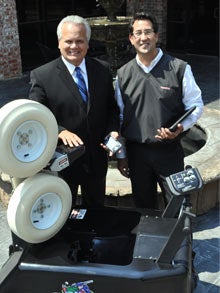 In 2002, Denny Duron wondered if a device existed that could throw or hit baseballs repeatedly and consistently to his son who was a middle infielder for his high-school baseball team. He went to the school, Evangel Christian Academy in Shreveport, La., and asked baseball coach Romy Cucjen if he knew of any. When neither man could find one, they decided to build one themselves.

Cucjen and Duron spent the next five-and-a-half years working with a team of mechanical and electrical engineers to develop a series of prototypes. The result is the FungoMan, named after a fungo -- a fly ball that's hit for fielding practice.

At $13,650, Cucjen says FungoMan is the only pitching machine that "places the ball perfectly anywhere on a field every three seconds." Operated by a wireless device that controls ball speed, range and frequency, the machine can be programmed to propel baseballs to any specific location on a field. For hitting practice, FungoMan's pitching mode includes fastballs, curveballs and knuckleballs that can be thrown up to 100 mph.

The Evangel Christian Academy was its testing center, says Cucjen, who is 49. "We ran practices and had the head coach give feedback for all aspects of the software and the machine."

Cucjen and Duron introduced FungoMan in 2007 at the American Baseball Coaches Association Trade Show in Chicago. Cucjen says selling the machine to a "traditionally minded" baseball market was a challenge. "We persistently demonstrated the machine until we found buyers," he says. "Our unwavering belief in the product and our company carried us through the initial rejections and naysayers." It also didn't hurt that they offered buyers a $250 referral fee for new customers.

Cucjen says the company has sold close to 400 FungoMan machines. Customers have included high schools, colleges and academies all over the country, as well as several Major League Baseball teams, including the Milwaukee Brewers.