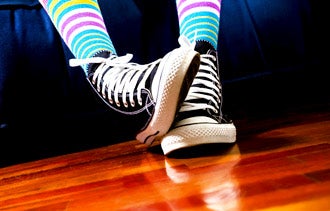 Uni K Wax Centers undoubtedly waxed numerous eyebrows last week -- and definitely raised a few with its promotion offering half off all waxing services for girls age 15 and younger.

The Florida-based franchise, which offers face and body waxing services in New York and its home state, didn't need to flat out state that the offer includes bikini waxes. The company marketed the sale with a photo of a bikini-clad ‘tweenish girl jumping in the air and a call to celebrate freedom and independence all month.

During July, the ad says, girls 15 and younger "can enjoy their first waxing experience and find it natural, safe and pleasant." Parental signature is required, the fine print notes.

Some folks found the promotion and the very idea of waxes for young teen and preteen girls inappropriate.

"Appalling. This calls for a girlcott," tweeted Janine Iamunno of Astoria, NY.

Another Twitter user, Quin Acciani of New York, posted that she was "more than a little disturbed that Uni K Wax just sent me an e-mail: ‘50% off waxing services for girls under 15!'"

And bourgiebynature tweeted that she is "deeply bothered by this."

In a statement, Uni K defended its July promotion, saying it is "aimed to parents since they are the decision makers." Mothers have been bringing daughters and granddaughters to its centers for years, according to the salon. The most requested services are for removing hair on upper lips, eyebrows and lower legs; bikini line is "rarely" requested.

"We do not consider this offer controversial," the salon said. "It is up to the discretion of the parents to decide which services the young girl will receive depending on her needs."

Uni K also took to its own blog on July 4, waxing positive about the advantages of waxing for girls and marketing the sale.

"Why should we focus on all of the negative stuff when there are so many positive things that can come from getting waxed?" the company asks. From Uni K's vantage point, waxing for preteen girls almost sounds like a parental imperative.

"What many mothers don't know is that girls are going for wax treatments younger than before....our daughters and granddaughters at 11 look like we did at 14 and 15," the post says. "So it is our job as parents and mothers to guide them through the changes in their bodies."

The blog quotes Uni K founder Noemi Grupenmager, who notes that some girls develop earlier than peers and other children can be cruel.

"The prevention of bullying in schools has taken center stage and waxing can be used to help. There is no reason for a young girl to feel embarrassed at PE or in the pool," she says.

So how do you see this, readers – is this a disturbing promotion worthy of a 'girlcott,' or a natural way to handle puberty and prevent bullying?