Count Me In Helps Women Entrepreneurs Increase Their Revenue 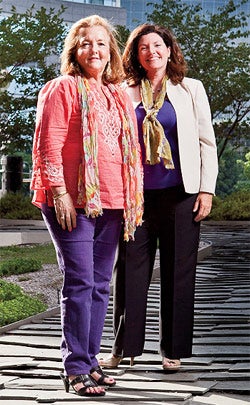 Theresa Daytner doesn't believe you can think too big. Six years ago, the co-founder of Daytner Construction Group, which provides general contracting and construction-management services, had the lofty goal of growing revenue from six digits to $10 million. In 2011, her Mount Airy, Md.-based company nearly doubled that target figure.

The growth spurt came courtesy of skills and support Daytner picked up from Count Me In for Women's Economic Independence, a nonprofit that provides resources, business education and community to help women turn their ventures into serious moneymakers, with revenue of $1 million or more.

There are more than 8.1 million women-owned businesses in the U.S., accounting for 29 percent of all enterprises, but only 1.8 percent of them ever hit the $1 million revenue mark. "They may not even have a notion they could be a bigger business," says Count Me In founder Nell Merlino (who also conceived "Take Our Daughters to Work Day").

When Daytner signed up for Count Me In's "Make Mine a Million $ Business" program, launched in 2005, her company had annual revenue of $100,000. Count Me In helped her refine her business pitch and connected her with experts in coaching, financing and publicity, as well as the organization's network of partners such as Sam's Club, Wal-Mart and American Express Open. Daytner completed the program in 2006, and her company closed out the year with revenue of $800,000. Last year, Daytner Construction pulled in $18 million.

By the Numbers
U.S. companies owned by women generate $1.3 trillion in revenue and employ 7.7 million people.

But they lag when it comes to the million-dollar club: Just 1.8 percent of women-owned companies hit that mark, vs. 6.3 percent on the male side.

1.6 million female-owned companies have annual revenue of more than $50,000.

"Starting with the experience of having to prepare and present ... it was an amazing catalyst for me," Daytner says. Her company has expanded from "a dining-room table" in 2003 to a 2,100-square-foot headquarters and 13 employees.

Merlino, who started Count Me In back in 1999, recalls that "there weren't a lot of role models" for women in business at the time. "As I talked to more women and more organizations, it was clear there was a need for an organization to step in and help women grow businesses," she says. More than 500 entrepreneurs are awardees and finalists of Make Mine a Million and other pitch competitions; 32 percent of them have reached the million-dollar mark.

In May, Count Me In launched an initiative in Los Angeles called Urban Rebound, offering conferences, pitch competitions and training and coaching programs; this year it's expanding to Charlotte, N.C., and Detroit. The goal: to help 100 women-owned firms in each region attain $250,000 in annual revenue within 12 to 18 months, pumping a potential $75 million into the economy and creating 600 to 900 new jobs.

"What I see already is a level of innovation that we never could have anticipated," Merlino says. "[There is] a range and array of products that are coming out of women's heads and their experience that I think will dramatically change how we live."

Are You Going to Pawn? Don't Be Fooled: Use These Tips to Spot Fraudulent Shops

Are You About to Be the Victim of a Ponzi Scheme?