Richard Branson on Dealing With Setbacks

Rod Kurtz
January 21, 2013 5 min read
Opinions expressed by Entrepreneur contributors are their own.

For many around the world, Sir Richard Branson has become the puckish face of entrepreneurship -- a high-flying daredevil who takes about as many risks in business as he does kitesurfing across the English Channel or attempting to circle the globe in a hot-air balloon.

Yet, when you see the iconic founder of Virgin Group sitting with his feet up, in a First Class seat on one of the many airliners in his global fleet, it's easy to forget that those same risks have resulted in a number of near-disastrous setbacks along the way.

Virgin Records may be part of entrepreneurial lore, but who remembers Virgin Brides? (No, it's not what you're thinking -- Branson launched a since-shuttered chain of bridal shops in the mid-1990s.) And, of course, there's Virgin Cola, the billionaire's attempt to dethrone Coca-Cola -- for which he famously drove a tank into Times Square to announce -- that he admits is perhaps his biggest business stumble.

But Branson hasn't wasted much time letting the missteps or naysayers get to him. He found his entrepreneurial calling early, starting a magazine called Student in his friend's basement at age 16. When he quit high school to pursue it full time, his headmaster famously wrote him, "Congratulations, Branson. I predict that you will either go to prison or become a millionaire." That prediction was wrong by a few zeros: Branson eventually sold his edgy record label for a cool billion in 1992, using the funds to stave off a threat to his startup airline, Virgin Atlantic, and help propel the Virgin empire to some 400 companies today.

We recently sat down with Branson to talk about (mis)adventures, the joy of setbacks and how to compete in a world of Goliaths.

Entrepreneur: You're very open about having made mistakes -- and, at times, literally making things up as you went along.

Branson: My nickname is Dr. Yes. I can't resist a challenge. And I've certainly said yes to too many things in my life. Therefore, not everything has worked out. Fortunately, most of the things I've said yes to were small ideas, just starting from scratch. So if they didn't work out, it wouldn't damage us too much financially or rummage the brand too much.

Entrepreneur: How did those early stumbles shape Virgin as a company?

Branson: In Britain, people who try things and then fail are actually well-respected. People like the underdog. If you go back to my adventure times, generally speaking, we failed on most of my adventures the first time. In attempting to bring back the Blue Riband [an award given to a ship for crossing the Atlantic Ocean in record time] for Great Britain, we created the boat the Atlantic Challenger in 1985. All was going very well until we sank 300 miles from the U.K., and were rescued by a banana boat. And the next year, we picked ourselves up and tried again and succeeded. Interestingly, if we had succeeded the first time, I think it would've been a big story, but not the massive story it turned into. At the time, we had just launched Virgin Atlantic, we were trying to put it on the map, and we jokingly took a full-page advert with a picture of the hull sticking out of the water saying, "Next time, Richard, take the plane." But it was things like that, where we tried and failed, that put Virgin on the map, gave it a sexier image than our bigger rivals, and turned us into an adventurous company and brand.

Entrepreneur: You say Virgin Cola was one of your more notable stumbles in business. In hindsight, what would you have done differently? 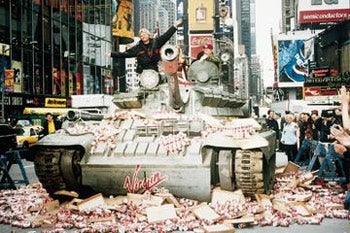 Richard Branson drives a tank through Times Square in 1998 to herald the U.S. launch of Virgin Cola, which later fizzed.

Branson: With Virgin Cola, we would not have assumed big means sleepy -- we would have prepared for the largest global soft drink company to fight back. The experience certainly hasn't stopped us from taking on other Goliaths. At Virgin, we don't spend much time regretting the past, and we don't let mistakes or failures get to us, and we certainly don't fear failure. We picked ourselves up and tried again and searched for opportunities in other gaps in the market.

Entrepreneur: Making mistakes often comes from taking risks, something you know a lot about. One of your biggest gambles was starting Virgin Atlantic. What made a record mogul get in the airline business?

Branson: "Screw it, just do it" is my approach to everything. I'm the sort of person who likes to give everything a try. If you are frustrated with how things are done, go and try something different, get fantastic people around you who share your beliefs and passion, and do it better. Imagine a record label wanting to start an airline, to go up against British Airways! But I was truly convinced after having been stranded as a passenger on an unnamed American airline that there was a better way, and that even I could do it better. As you can imagine, we faced a lot of skepticism and doubt. But if you can run one business well, you should be able to run another business well -- and that has kept me going through all our risky business.