Innovative Event Aims to Merge the Worlds of Fashion and Technology

By Brian Patrick Eha February 5, 2013
Opinions expressed by Entrepreneur contributors are their own.

Over 300 designers, coders and idea people came together this past weekend in New York's Garment District for Decoded Fashion's hackathon, a two-day event designed to create an app that will assist the Council of Fashion Designers of America (CFDA) in its mission to promote the American fashion industry around the world.

Participants registered and formed teams in advance on the website Hacker League. After hearing from industry experts about the fashion industry's pain points, each team brainstormed an app to help American fashion brands grow in the marketplace. 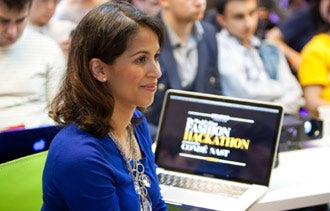 Liz Bacelar, founder of Decoded Fashion, during a rare quiet moment at the hackathon she organized on Feb. 3, 2013.
Photo courtesy of Margarita Corporan / Decoded Fashion

"It's not just fashion needing tech. It's tech needing to understand fashion," says Decoded Fashion founder Liz Bacelar, who organized the event along with her partner Stephanie Winston Wolkoff. Entrepreneurs won't be able to build relevant companies in the space unless they understand the industry's needs, she says. The hackathon aimed to foster dialogue and collaboration between the two worlds.

According to designer Rachel Roy and other speakers, those needs include analytics tools to measure the success or failure rate of products and sophisticated ways to get the right product in front of the right customer at the right time. More industry professionals are realizing the potential of technology to solve these issues. Fashion GPS, an inventory management system, is now in use by many designers, including Marc Jacobs and Chanel.

While hackathons in other industries are predominantly male, 40 percent of the hackers at Decoded's event were women. The international mix of participants led to a wide range of projects, from a social dashboard for brick-and-mortar stores to a "Pandora for outfits" -- a virtual closet that would combine your own clothes with complementary designer items available for purchase online. For the second day of the event, the pitches were refined into two-minute presentations for a panel of judges whose members included Style.com editor-in-chief Dirk Standen and Tumblr's Valentine Uhovski.

On Saturday night, the hacker teams pitched their ideas to Bacelar and other mentors, including Andy Hagerman of design-education startup The Design Gym and Mike Caprio, one of the founders of experiential startup competition StartupBus. They gave the hackers a mix of broadly applicable startup wisdom and advice unique to the fashion space. "You have to be either first, or better, or cheat," Christopher Kennedy, the second-place winner of TechCrunch Disrupt 2012, told one team that was pitching a service similar to one that already exists.

Bacelar gave the aspiring entrepreneurs lessons using existing fashion tech startups as examples, such as EDITD, a trend forecasting company that tracks which products sell and when; Maker's Row, a marketplace that democratizes the manufacturing process; and visual search engine Snap Fashion, which connects shoppers with products they truly want. Snap Fashion took home the $65,000 top prize at Decoded Fashion's pitch competition in London last fall. Each company solves a problem for the industry, and winning hackathon pitches would do the same, she said. A fashion-related idea was not enough.

The judges chose five finalists out of 78 projects. Among them were Coveted, a Tumblr-enabled ecommerce platform that allows merchants to provide one-click sales through shareable purchase links, and SWATCHit, a web and mobile app to connect designers with skilled artisans in emerging markets. The others were Fashion Dashboard, Avant Garde and 42.

The finalists will buckle down to fleshing out their ideas over the next 10 days. On Feb. 14, they will present their concepts at an event during Mercedes-Benz Fashion Week, and the winning team will receive a $10,000 cash prize and a launch supported by the Council of Fashion Designers of America.

Editor's note: A previous version of this story gave Christopher Kennedy's quote as "You have to be either first or better or cheaper."