How to Get Your First $1 Million in Sales

Tyler Bosmeny is the co-founder and CEO of Clever, which is a fast growing company in the education space. He recently gave a talk at Sam Altman’s How to Start a Startup class at Stanford University describing how startups can get their first $1 million in sales.

In the talk, he outlined the four steps of the funnel:

His presentation focused on optimizing for each of the first three steps, and some things you’ll want to avoid. We’ve outlined all of his main points in this blog post.

This is the process of figuring our who will take your call. Bosmeny brings up this bell curve:

When you’re starting out, you’ll want to reach those small amount of innovators (those on the left of the bell curve) that will actually take a call from a startup. Because it’s such a small percentage of people, it really becomes a numbers game. You have to make a lot of calls and talk to a lot of people because you need to find that 2.5% that may be interested in your product.

There are three methods that Bosmeny has found useful for getting calls: use your personal network, go to conferences, and send (intelligent) cold emails.

You have to go to where your users are. In the early days of Clever, Bosmeny and his team would go to a lot of conferences. For each conference, they’d get the attendee list in advance and send an email to each person to try and set up a meeting. If they were successful, Bosmeny and his team would have enough meetings to fill their entire schedule.

Most people don’t know how to send cold emails. Bosmeny advises that you keep the cold emails short and to the point. This is the template Bosmeny used in the early days: 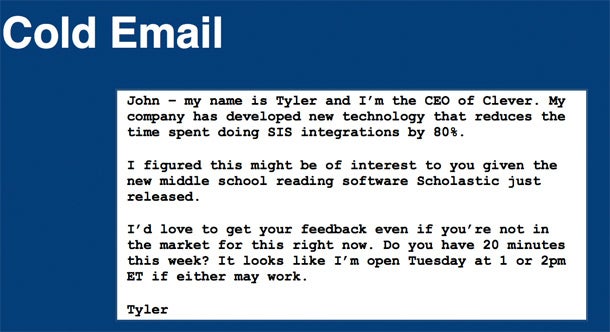 Tell them who you are, what you’re building, and suggest a time to meet and talk about it. The key is finding the right person to send it to, and it may vary for each business.

When you do get people on the phone, it’s important to shut up and let them talk about their product. This is difficult for many founders to do, because they’re proud of the product they’ve been working on and want to talk about it. The best salespeople talk very little during calls; some of them only spend about 30% of the call talking. Most of them ask questions, such as:

Why did you agree to take my call today?
With the problem we’re discussing, how do you solve it today?
What would your ideal solution look like?

Get to a Yes or No as Quickly as You Can

During the sales process, it’s important to follow up a lot. But the goal should be to get a yes or no from them as quickly as possible, because as a startup time your time is incredibly valuable. Bosmeny says:

“Where you die is if you have a thousand ‘maybe’s’”

And in many cases, a no is better than a maybe, because it allows you move on and focus on the next prospect.

When you do get a deal, it’s important to avoid some “closing traps”.

Don’t Quibble Over Minor Points in the Agreement

Make sure you have the sales agreement the way you want it, but don’t quibble over minor points. As a startup, you need focus on signing deals, getting references customers, getting validation, and getting revenue. You’re hurting yourself if you spend time worrying about small details in the agreement.

In many cases, some companies will use the product if the start up agrees to build a feature they want. If they don’t build the feature, there’s no sale. The truth is they really don’t want to use your product, and are just being polite instead of giving you a firm “no”. Even if you did build, they’d come back and say they’d need another one.

If this is happening to you, Bosmeny recommends doing one of two things:

Many customers will ask for a free trial. There’s no problem with them asking, but as a startup you need commitment, validation and revenue. A free trial doesn’t get you any of that, and even makes you sell them again on your product after the trial ends.

Instead of offering a free trial, offer them an annual contract with a 30 day money back guarantee.

Figure Out The Right Sales Approach

When you’re starting out, you don’t have to do things that scale. You can purposely try things unscalable things to get customers. But past a certain point, you’ll need to think about which aspects are repeatable and can be scaled.

Bosmeny recommends an article written by Christoph Janz called the five ways to build a $100 million company. In it, he says that you’ll have either a high price – low volume sales, a medium price – medium volume sales, or a low price – high volume sales.

Each of these buckets require their own approach. When you’re starting out, you don’t need to know which bucket you fall into. But you’ll eventually figure it out.

Each of these buckets require their own sales approach. If you’re in the low price – high volume (100,000 customers at $1,000) don’t approach it as if you’re in the high price – low volume bucket, which requires a field sales team that flies around the country attending multiple sales meetings to try and close one deal. Both require a much different sales approach.