Slowly But Surely, More Entrepreneurs Are Coming Out About Depression, Seeking Support Online

When you're in a hopeless, depressive funk, these four simple words can be crippling: "How are you doing?" Like little daggers, they set off pangs of dread for Rand Fishkin whenever anyone put them to him during his "long, ugly year of depression."

The 35-year-old online marketing expert is one of a growing number of entrepreneurs in the pressure-cooker tech world to admit that, no, they're not killing it and, no, they can't fake it until they make it. And they aren't going to keep quiet about it either. Not any more.

"There's the expectation, that entrepreneurs in tech in particular always have to over-represent the positive and underplay the negatives," Fishkin says. "It's a marketing tactic, really, a terrible one. We have to depict that things are going well, the business is growing and, meanwhile, things are not well. We're not delivering on our promises, not living up to the values, expectations and capabilities of our team, things are falling apart and that's heavy."

The Seattle-based marketer says his depression stemmed from feelings of shame, weakness and failure – none of which particularly inspire confidence in employees, peers and investors, nor make a person want to crawl out of bed in the morning and captain the ship.

The darkness grew worse over time as Moz, the search-engine marketing software startup he co-founded with his mother in 2004, expanded from a half-dozen employees in 2006 to around 125 in 2013. Scaling up so much so fast proved too much for Fishkin. He felt increasingly out of his emotional depth to properly handle his snowballing management duties. Then, an overly ambitious new product rollout Moz had undertaken unraveled on his watch. Slowly, he felt he was unraveling along with it.

In over his head but unwilling to tap out and risk people knowing he was floundering, he says he made a series of "dumb moves" at Moz that involved everything from a failed hiring incentive to a bungled software release. Eventually, he decided the right move was to move on, stepping down as CEO in December 2013. "It was an immensely painful, tough experience," he recalls.

Erik Torenberg, Product Hunt founding team member, says Fishkin's situation is far from unique. What is unusual about it, however, is the fact that he eventually openly talked about it and continues to.

Related: The Benefits of Practicing Vulnerability in the Office

The 25-year-old marketer-rapper, who also co-founded the live rap battle site rapt.fm, recently asked a large crowd at a tech conference if they'd ever endured serious burnout or depression. "Nearly everyone's hands went up," he wrote in a poignant recent Medium post. "Then I asked if these people had ever seen a therapist. No hands went up. One shy person raised their hand and said, "I used to, but not anymore' a bit too declaratively."

No, everything's not ok

Torenberg says he's seen many founders like Fishkin fall into the depths of depression while in the trenches of launching and growing their own companies. While he admits that he himself has suffered "burnout" and that he's been in a "really dark place before," he says he hasn't experienced true depression, "not in a clinical sense or anything."

Both Torenberg and Fishkin say holding it all together while falling apart comes with the territory because the stakes are so high. "With the majority of startups dying slowly, people are hesitant to admit that they're doing poorly," Torenburg says. "They don't want to become the next startup to disappear, so they paste on a smile while they're sinking, knowing that they're in a culture that stigmatizes therapy and depression, that associates asking for help with weakness."

Related: Empathy in Business is Vital to an Entrepreneur's Success

Fishkin didn't break his silence and seek help until he was encouraged to by his close friend, Brad Feld. The Foundry Group founder and Techstars co-founder first went public with his own mental health struggles back in 2012 on his popular blog. Widely viewed as one of the first tech leaders to come clean about what many now view as an epidemic in the industry, the 49-year-old has become an outspoken advocate for openly addressing the still-touchy topic.

Feld says depression is very common in the startup realm, though often internalized and hidden away, unlike how we increasingly openly admit to and even celebrate failure. "For some reason we've embraced failure as an entrepreneurial trait that is ok," he wrote, "but we still struggle with acknowledging and talking about depression."

Slowly but surely, the tide is beginning to turn. Feld says the tech community has a very long way to go. For the stigma around mental illness to go away, he thinks more leaders will have to come out from the shadows and for those who work with them to be receptive to not judging, even to providing a shoulder to lean on.

That's where the support service 7 Cups of Tea comes in. The Virginia Beach, Va.-based organization, named after an ancient Chinese poem about healing, offers free, on-demand listening services for anyone who needs to simply be heard or vent. Under Torenberg's direction, Product Hunt recently partnered with the Y Combinator-incubated organization to create a special startup support system to encourage more startup leaders and employees -- or anyone in the tech industry -- not only to seek help, but to help each other.

The goal of the initiative is simple: "It's whatever you're going through, you're not alone," Torenberg says. "Talking about stress, anxiety and depression with someone else can make it okay, like there's nothing wrong with feeling this way. It's entrepreneurs helping other entrepreneurs, creating awareness and taking care of each other in tough times."

Related: 5 Sacrifices Every Entrepreneur Must Make

Technically, live chat-based 7 Cups of Tea listening sessions are administered by thousands of active listeners who complete the organization's hour-long online training course and pass a certain test. Listening services -- which sometimes lead to referrals to professional, licensed therapists, counselors or emergency contacts -- are available anonymously and confidentially day or night, 24/7. Some of 7 Cups of Tea's listeners are licensed professional counselors and therapists, but most are not. None give medical or psychological advice.

Torenberg, Fishkin and Feld are among six prominent figures within the industry bringing attention to 7 Cups of Tea's new startup listening service and startup support guide, kicked off last March at a well-attended launch party at 500 Startups' San Francisco headquarters. Each has their headshot featured on the site, hemmed by heartfelt messages about their personal mental health journeys and why they're passionate about destigmatizing depression. 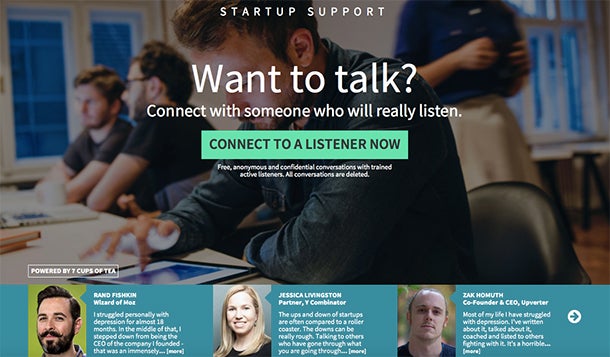 Outside of 7 Cups of Tea, there generally aren't many alternative safe havens online where startup founders can unload their emotions and receive support. However, a few have opened up about the pressures of the startup grind on Quora, a Q&A-style website popular among techies of all stripes. One anonymous Quora user, answering the question "What is it like to be a startup founder?" said he or she does not speak freely about battling depression due of fears of being shunned.

"My secret? I'm sometimes so depressed and overwhelmed and anxious that I contemplate killing myself," the user wrote. "...If I were to come out of the closet, so to speak, and admit to my fears and anxieties and sometimes crippling depression, I fear that I would be ostracized."

Oftentimes, simply being heard, particularly by someone who can relate to what you're going through or has been through something similar, is enough to start the healing process, says Glen Moriarty, 38, licensed psychologist and founder of 7 Cups of Tea.

Moriarty says he turns to his wife, Nicole, a therapist, to feel heard. The idea for 7 Cups of Tea came to him two years ago, after he downloaded with her about a stressful business trip. "I thought, "Not everyone is married to a licensed therapist. A lot of people don't have this same opportunity. Where can they turn?'"

For the past two years, millions of people have turned to Moriarty's listening service and more continue to come every day seeking to be heard. Some 90,000 conversations on average are taking place spanning 150 countries between 7 Cups of Tea's website, iOS app and Android app per week, with an average conversation length of 21 minutes.

Startup founders aren't immune to the basic human need to be heard, even if stereotypical Silicon Valley bravado might have them thinking they are, says Moriarty. "Everything is weighing on them -- investors, employees, customers, coming up with the next big thing in tech -- and when someone says to them, "I hear you. Wow, you sound like you're carrying a lot. That must feel intense,' suddenly it feels like that weight is lifted, even just a little, and you can go on."

Indeed, for Torenberg, it wasn't until he found out that people he admired within the tech startup community struggled with depression that he learned to be okay with his own emotional lows. "Sharing and listening to my peers helped," he says. "Everyone sees the accomplishments but they don't see the hardships. Having a community to share the lows with can keep you sane and even save your life."