Raspberry Pi may be losing its mini-computer crown. A new kid on the block has just arrived. Bye, bye, Raspberry Pi. C.H.I.P. does everything you do for almost four times cheaper.

Known as C.H.I.P., the micro-computer powerhouse everyone’s buzzing about, launched on Kickstarter on May 7 and blasted past its $50,000 goal right out of the gate. The small but mighty machine racked up $100,000 in just over 12 hours. In only five days, it surpassed the million-dollar mark.

Related: Before You Launch Your Kickstarter Campaign Do These 6 Things

Billed as “Built for work, play, and everything in between!", the mini computer packs much of the functionality of a full-sized PC in a circuit board as small as a credit card. And at $9 a pop, the price is tiny, too.

So what do you get for nine greenbacks? Quite a lot. It comes equipped with a 1 gigahertz processor, 512 megabytes of RAM, 4 gigabytes of storage and reams of nerdalicious bragging rights. Not bad for the price of a cheap bottle of wine or a one-year subscription to Smithsonian Magazine.

Just crossed over 100K in just over 12 hours! Thanks to all our backers! Let's not stop here! Let's find more folks to "chip in"#getchip

Related: 3 Things to Do Before Kickstarting Your Hardware Startup

Plus, the Lilliputian Linux-powered computer is Bluetooth- and Wi-Fi-enabled and connects to a MIDI keyboard and just about any display screen. (Display adapters are available for less than $25.) 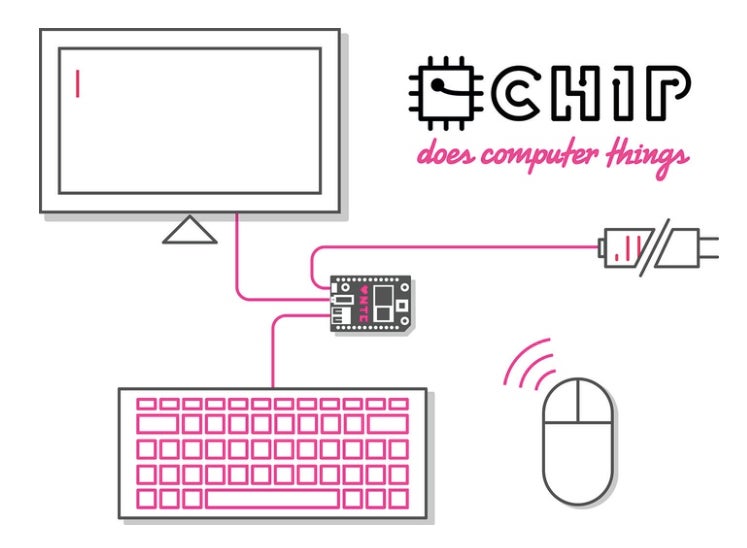 Another cool thing you can do is pair the C.H.I.P. with LibreOffice, a free, open source office software suite, to create and edit documents and presentations.

To break up all that mundane work, dozens of games, apps and tools come preinstalled on the device. Think email, chat and photo editing, to name a few. Its makers, the nine artists and engineers behind the Oakland, Calif.-based tech startup Next Thing Co., say their brainchild can also run thousands of free apps from the open source community.

For surfing the Internet, the “Raspberry Pi killer” uses the Chromium browser and features a media player for audio and video files. Bonus for DIYers: It also comes pre-loaded with Scratch, a program that teaches the basics of coding.

To use C.H.I.P. on the go, you can buy a snap-on travel case that’s small enough to stash in your back pocket. The Nintendo Game Boy-like plastic shell is outfitted with a 4.3-inch touchscreen, QWERTY keyboard and a five-hour battery.

If you want your own C.H.I.P., you’ll have to hang tight a bit. Manufacturing doesn’t begin until November and initial shipments are slated for May of next year. By the looks of it, it’s worth the wait.

To see the gizmo in all its geeky goodness, check out the video below:

By the way, in case you’re wondering about the doodad’s acronym name, its creators are choosing to remain mum about the meaning behind it. “We’re curious to know what people think,” Next Thing Co. co-founder and CEO Dave Rauchwerk told Entrepreneur this afternoon. Hmm, maybe it stands for Computer Hacking and Intellectual Property. Maybe not. Any guesses?

Related: 4 Reasons to Crowdfund vs. Self-Fund a Product Idea