By Carly Okyle September 10, 2015
Opinions expressed by Entrepreneur contributors are their own.

Joe Landolina has always been a bit of a science nerd. Growing up he'd spend hours at his grandparents’ winery, finding plants in the vineyard and trying to see what he could extract from them. It was while he was tinkering with algae that the then 17-year-old discovered a liquid that would change into a solid quickly. “I always knew I wanted to go into medicine, so I thought of stopping a bullet wound [using that liquid].”

Now 22, Landolina has started his own company called Suneris which makes Vetigel, a plant-based serum that, when applied to wounds, stops bleeding in seconds. It's a product bigger than his initial aspirations. 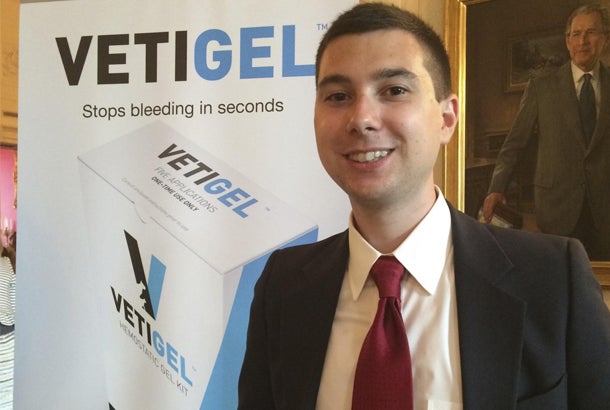 "[Liquid bandage] doesn’t stop bleeding. It’ll seal the surface of a small cut but is not effective for traumatic bleeding." Landolina says. "Vetigel makes a mechanical plug that holds the pressure in and also helps the body make its own clots.”

Related: This MIT Grad Is Changing Medicine With a Needle-Covered Pill

While Landolina, along with his co-founder Isaac Miller and 25-person company, are still about a year away from being able to use its product on humans (if all goes well in the approval process), the entrepreneur has found an unexpected industry for Vetigel: animal health care.

"Vets don’t have most of the tech that’s available to human patients,” Landolina says. He explains the standard of care for animals with traumatic bleeds is to use a gelatin sponge, but this method can take 10 minutes to staunch the bleeding, compared to seconds with Vetigel. This coupled with the fact that there are fewer federal regulations required to administer products to animals (as opposed to humans) has helped Suneris quickly break into the field.

There are 3,500 veterinary clinics enrolled to use Vetigel once it’s distributed in the coming months. The company’s focus continues to be getting its product -- retailing for $150 for five syringes -- into the hands of surgeons, a high-use customer, as well as general practitioners (so they can begin do basic surgeries, rather than providing a referral to another doctor).

With Vetigel's current use and the possibility that it could one day be used on humans has caused a lot of interest among investors. The company has more than 60 investors, and they were easy to find. After Landolina hosted a Ted Talk (see below), Suneris had more interest than they could take on. “We had 1,200 accredited investors that asked to invest,” he says, adding that he and his team eventually asked potential backers to apply to be considered via a selection process. They whittled that batch of applications down to 40 (adding additional investors later on). Though Landolina wouldn’t give names, he says the backers are private individuals with high net worth, most of whom he had never met or had a connection to prior to investment. “We want someone who is not a VC, who’s passionate about the product, trusting of the team and has a network that’s beneficial,” he says.

The funding Suneris has received is going toward research and development, along with focusing on the next step: getting FDA approval for human use. Everyone from military members to surgeons and emergency medical technicians could benefit from Vetigel’s abilities but that’s still a bit down the road. FDA approval for military and emergency use is expected within the next year or two and surgical use could be approved as soon as three years from now. To that end, the company is working on a new facility where they can work on researching, testing and manufacturing the version of Vetigel that would be used on people. Suneris hopes to find a suitable facility by early next year.

For their launch event this summer, the backdrop was the Brooklyn Zoo. As vets and other guests filed in, a sea lion surfaced on a rock in his tank and barked. It was a happy sound, perhaps signaling approval.

Related: Artificial Blood Transfusions Could Be a Reality By 2017