By Clint Evans and Joshua Lee November 2, 2015
Opinions expressed by Entrepreneur contributors are their own.

Hiring the right team can seem like attempting to figure out a Rubik's Cube wrapped in a riddle with Alexander the Great's Gordian knot tied around the whole mess. Even Fortune 100 companies, who have been around for over a century, still get hiring wrong about half the time.

Young entrepreneurs we mentor usually don't comprehend the gravity of how important these three keys are to the well being of your business. In the chase to fill an "immediate need" role, these keys often get pushed to the back burner in subordination to, "Just hire someone now." Don't let yourself fall prey to this trap. Another big trap is hiring someone just like you. Instead, hire people who complement your skills and the skills of your current team.

Related: 4 Creative Tactics to Find and Recruit the Best Talent

Here are three keys to assembling your gold-standard team:

1. Define the role with absolute clarity.

Defining the role goes beyond just writing the job title and job description. Gary Keller, founder of Keller Williams (the largest real estate agency in the world), advises business owners to fill out an actual missing persons report. It’s a great frame of reference for the level of detail you want to go into when choosing your next hire.

Ask yourself what two or three main character traits your ideal hire should bring to the table. What would stellar performance in this role look like? Define your numbers. If you have a manager hiring, they need to know this process and how to define this role at the level of clarity you’re looking for.

For example, one of Joshua and my clients was hiring a front desk person. Of course, that person had to have a dynamic phone personality. Beyond that, an important metric for that role was cancelation rate. It was 16 percent when our client was scheduling. The lady who came aboard got it down to between four and five percent within seven months.

The clearer you put specific numbers and goals in place, the more likely you’ll be to find your missing person. This also helps you communicate to the new hire what your exact expectations of them are and how their role is mission-critical.

Related: How to Build an Executive-Level Dream Team

2. Stack the odds of a culture fit in your favor.

The Marines were having trouble getting enough recruits and indoctrinating them in the Marine Way. Somebody had a radical idea to instead recruit people who were already living elements of the Marine Way. They discovered the sons of farmers were a good fit because they were accustomed to waking up early and hard manual labor in the field. So, the marketing people created a successful campaign to target farmers’ sons.

Once you’ve zeroed in on a group that is already living some of the elements of your company’s culture, then put an appropriate Easter egg in the application process. If your culture is fun and encourages off-the-wall thinking, you might have them reply with the subject line: Clint Evans resume – ninjas are cool 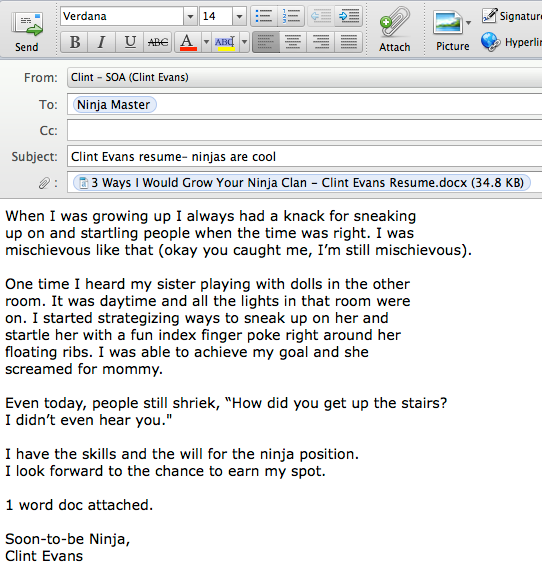 If your organization’s guiding value is to be a paragon of virtue, you might instruct them (in the small print section) to include in the body of their email a story from their life where they were tempted but in the end their virtue triumphed. This gives you a clue if the person is paying attention or just blindly emailing out resumes. A final clue to look for is whether or not they understand your industry. Joshua and I are in the coaching and digital marketing world. If an interviewee shows up in a three-piece suit that’s a big clue to us that guy doesn’t understand our industry.

3. Build your gold-standard roster before you need it.

As Gary Keller says, ”If you want to build your all-star team roster, then you have to build your prospect list at least six months before.” First, identify key people you’d love to have on your team. Tai Lopez advises each person has one (preferably both) of these traits: deep domain expertise and cognitive ability. Put together a dream roster of about 10 times the amount of people you’ll need on your team. This way you’ll have enough talent, because only a small portion of them will be willing to move companies at any given time.

These all-stars are probably employed so proactively connect with them. Set up a system where you can maintain consistent contact once or twice a month with valuable industry, mindset and career advancement resources -- and not just things you or your company have published. When the time is right to move, they’ll reach out to you.

A strategy that projects three to six months in advance is tough for most business owners to do because they’re putting out fires in their day-to-day business. Emphasize this strategy in your business. If you don’t, you’ll fall into the trap of making quick hires to fill immediate needs, and you might get stuck taking the wrong person. Usually this underlying sense of desperation leads to hiring an underperforming or downright disastrous team member.

These three keys give you the highest probability to assemble the best team in your industry. Feel free to ask Joshua and I how we’ve done it -- and still do -- in our companies.