How the Creator of @OverheardLA and @OverheardNewYork Turned the Act of Eavesdropping Into 2.6 Million Instagram Followers

The accounts feature funny, user-submitted quotes, such as: "I joined a gym once in Pittsburgh just to use the bathroom."

In this series, Instagram Icon, Entrepreneur speaks with the individuals behind popular Instagram accounts to find out the secrets of their success.

In April 2016, Jesse Margolis sat in an L.A. coffee shop called Verve, surrounded by natural light, plants and the smell of roasting coffee. Two girls soon entered and sat down next to him. They looked like they could be artists or musicians, and Margolis remembers they had a stereotypical conversation about a recent trip to Europe -- that people there were “so much cooler” than people in America.

Then, one girl looked at the other and asked: “So, what’s your writing process?”

“It could be anything. Like have you heard of this Instagram @OverheardLA? It’s fucking stupid. Not all the posts are but some are. Sometimes I’ll read their stuff and get inspired. There was a post about someone who wears glitter to the gym. So I was like, Maybe I’ll write a song about glitter.”

Margolis’s ears perked up. He runs @OverheardLA, the account with 1 million followers that pokes fun at conversations overheard anonymously on the city streets, in coffee shops, outside clubs or in grocery stores -- and serves to make a statement about what life is like in the city. He sat on the nugget of eavesdropping gold for a while and posted it that December, captioning it with #Meta and #LifeImitatesInstagram.

Margolis is also behind four other spinoffs -- @OverheardNewYork, @OverheardSanFrancisco, @OverheardLondon and @OverheardUniversity -- as well as the company’s three branded accounts (@OverheardBumble, @OverheardUber and @OverheardLeLabo). Altogether, the Overheard accounts reach more than 2.6 million followers with real-life quotes including, “You can’t be vegan in jail,” or, “I have never dressed for success, ever -- which is probably why I’m not successful.”

Entrepreneur chatted with Margolis about how he got his start, how he monetizes the family of eight accounts and his all-time favorite posts.

Ironically, I was never into social media. I was never on Twitter and didn’t do much on Facebook, and I don’t think I had a clear understanding of what Instagram was. A couple of friends of mine made an account for me when Instagram started taking off, and I never really followed anyone, but I used it to make little creative things that would make my friends laugh -- like emoji book covers. I also had this running joke with my barista where I’d take pictures of his latte art and do Rorschach interpretations.

One day, I heard two women talking at the health store, and it was the most absurd conversation I’d ever heard. I posted it on my account and got, say, 30 likes instead of my usual 13. I did that a few more times because I had things written down I’d heard from bizarre characters around L.A. After about a week, a good friend of mine told me I had to turn it into an account. It was 2015, and since I didn’t love my job and I was missing being creative, I did it.

I locked myself in a room for the weekend and came up with what the account would be -- I treated it more like a project than an Instagram account. I also came up with the rules -- we’d never use hashtags to gain followers and only use them for humor, it would never be about calling someone out or doing something that could embarrass a specific individual, comedy over gossip and we’d stay away from politics and religion as much as possible because there are too many trolls.

When I started the account, my friends adored it because I’m always that person who’s just slightly talking shit or sniping on people, and some things just work. It’s certainly grown beyond what I could’ve magined as I’m currently standing in an office with five people in it.

We probably get at least a 100 submissions per day on the larger accounts like @OverheardLA and @OverheardNewYork, and then it scales down. I look after the L.A. account, and it’s just something you check in on throughout the day because otherwise it’ll pile up. We get 10 percent of submissions by email and the rest by Instagram DM (direct message). They’re everything from the funniest thing you’ve ever read to the dumbest stuff you could possibly imagine -- like someone asking, “How are you?” And sometimes, I’ll get submissions from where I currently am, which is always fun. Once, earlier this year, I was overheard and what I said was submitted to me about 45 minutes later.

For a while it was just me hunched over my phone, but now we sort of have a little team and an office. Then we have city editors for each of the accounts, and we just brought on someone who’s helping us establish our video. We’re making the transition from overhearing conversations to overhearing culture -- working on humorous city guides, an interview series, merchandise, videos and a book coming out soon (called We Only Dated for 11 Instagrams, with an introduction from the mayor of L.A.). So we’re trying to grow into a small comedy/media company.

We usually post once a day on all the accounts except @OverheardLA, where we post twice a day. It’s more about whether we have great content. It’s not like a meme account that can just post 20 times a day and try to grow really quickly -- we want people to see that white square and be excited about it. It doesn’t mean every post is the right choice, but it’s more just about good content.

I was able to start doing this full time after about a year. It’s completely self-funded, and we’ve never raised money or paid for followers. It’s all friends tagging each other or hearing about it organically. We had about five-fold growth between last year and this year. We’ve also tried to be intentional about monetizing it. Especially during the first two years, we’d get offers all the time to promote really junky stuff like mermaid blankets and “single AF” kits and stuff like that. We’d always turn them down and say no. The main driver of our business is our branded accounts -- @OverheardLeLabo, @OverheardBumble and @OverheardUber.

When Instagram Story came along, it solved a lot of problems for us because it’s a way to advertise without really ruining the spirit of the account by breaking up the text-only images. We do partnerships with Netflix, and we also work with local places like Erewhon Market -- basically Whole Foods on crack. We’ll do very clear collaborations and just try to use Instagram Story for them.

We’re also getting into merchandise, we’re putting out a book and we’ve done some fun activations -- like coffee sleeves with Alfred Coffee in L.A. or “L.A. horror stories” that were millennial-focused, first-world problems horror stories for our partnership with American Horror Story. It’s just about creatively collaborating with advertisers and making sure that when you’re posting ads, you make it clear it’s an ad but they’re still really funny. Some people will always roll their eyes, but if you do it with the right intention, people understand there’s a happy medium.

That’s a really good question because I had no idea what I was doing when I started it. For all that social media has that is horrible, unhealthy, gives you fomo or gives you a distorted view of the world, it also has this incredible ability to bring your dreams to life. It sounds cheesy, but if you’re a photographer or artist, or an illustrator who gets a book deal -- there’s a whole new wave of people on social media that are just being themselves, doing cool stuff and finding a natural audience.

My advice is not to touch social media unless you’re going to be all in. I know so many people who flirt with using social media and then stop, and it’s better to either not have a promotional relationship with social media or go all in. My other advice is to pick one thing that is truly unique and just do it for the right reasons. A lot of people use the platform to portray something inauthentic, and it’s obvious. People can see through the filters of whatever you’re doing. And sometimes you just have to mess around. The Overheard accounts were a result of messing around -- I was doing two or three things that didn’t work, so sometimes you have to be willing to just creatively explore.

See below for five of Margolis's favorite posts.

“The L.A. account has had so much gold it's hard to choose. People familiar with the ridiculous menu at Cafe Gratitude will relate to this.” 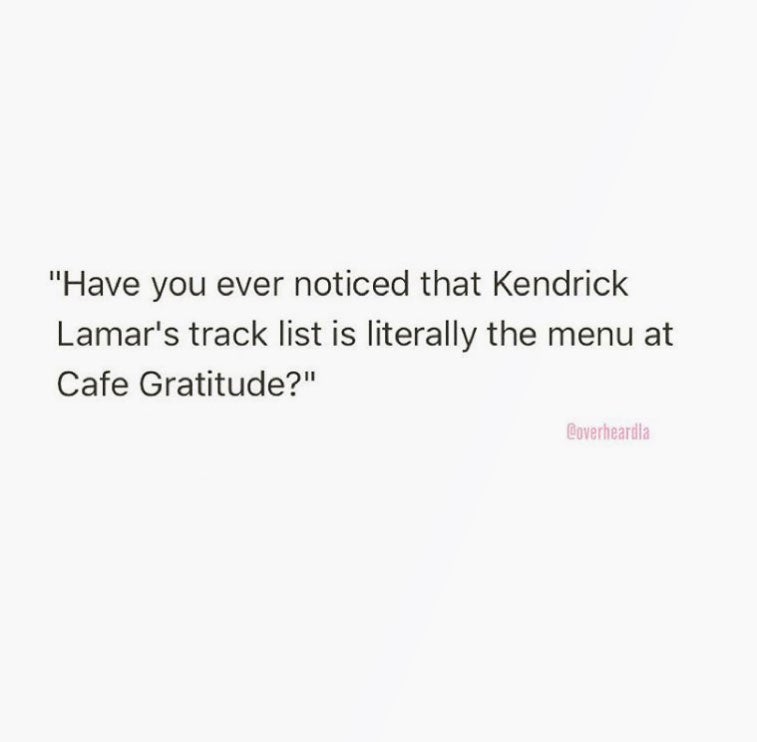 “This is a personal favorite -- it sums up the exquisite absurdity of life in New York City. Feels like a Seinfeld episode that didn't make the cut.” 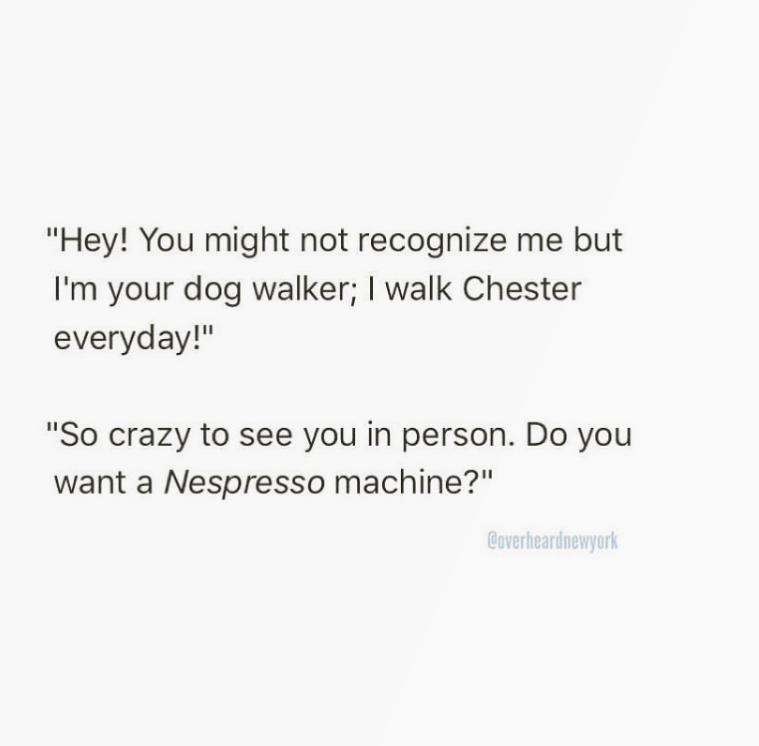 “Love the contrast between the innocence of American enthusiasm and dry, British wit.” 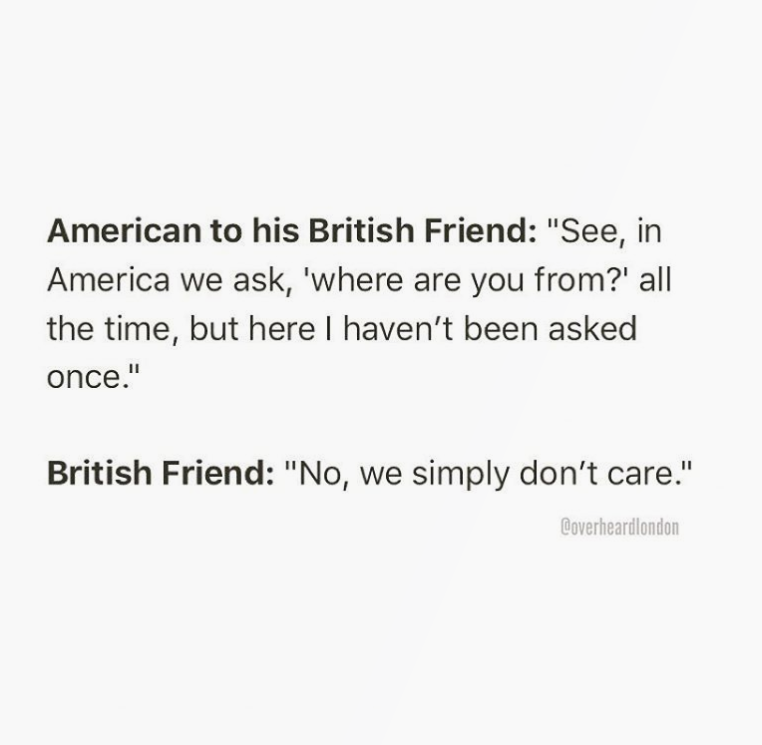 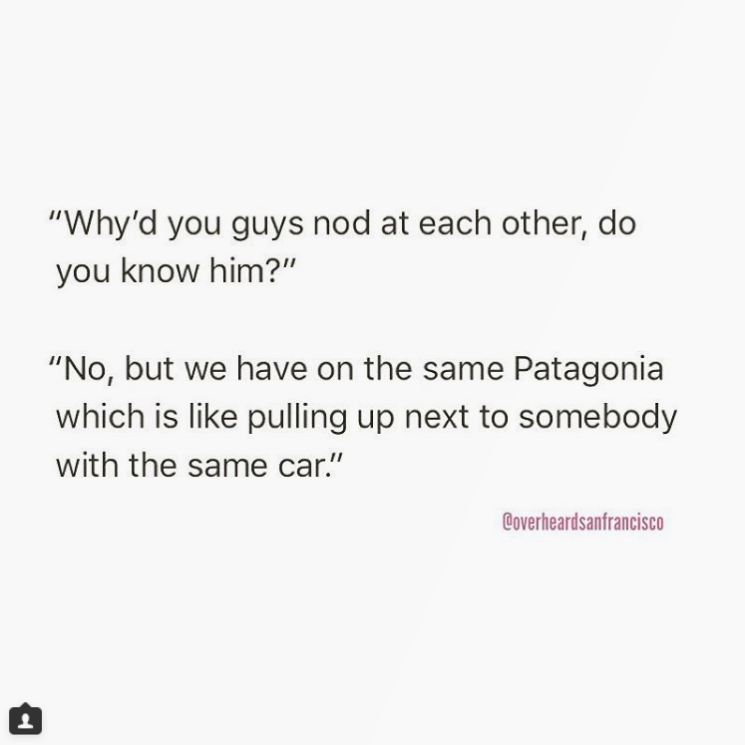 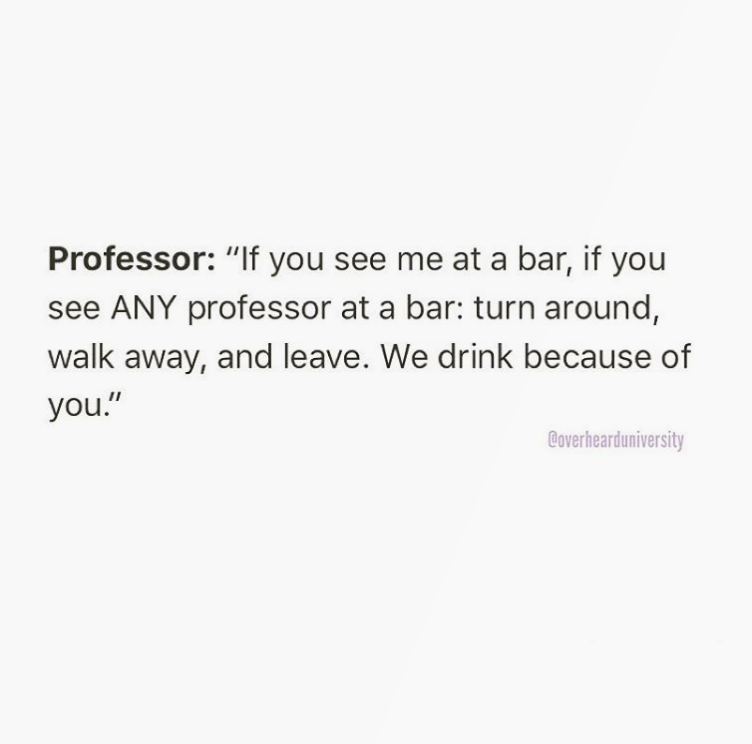