He turned a defamatory lawsuit into a triumph, then used his experience to help others.

January 3, 2020
Opinions expressed by Entrepreneur contributors are their own.

In 2010, James Daily faced three things no lawyer ever asks for: the feds were calling him; he was being sued for $500 million; and subsequently, he was on the front page of the Wall Street Journal. After establishing a prestigious career in law, Daily was now the one who needed a lawyer — all because he did the right thing. He had reported embezzlement, and this was payback.

Today, Daily is a self-made millionaire running his own firm, Daily Law Group, who now lends his expertise to the U.S. government. Daily’s journey to top dog, however, would be full of battles.

Daily grew up in rural Wisconsin, a member of the 4-H club and the Boy Scouts. “I knew I wanted to be a lawyer in the fourth grade,” touts Daily. In elementary school, he accidentally knocked over his friend’s lunchbox, breaking his thermos. “Daily, I’m going to sue you,” his friend said. “Sue me? I’m going to sue you!” rebutted Daily. From that moment on, Daily knew he wanted to go into law.

Daily studied at University of Wisconsin-Whitewater as an undergraduate, and after seeing a brochure depicting Pepperdine University in Malibu in the dead of a Wisconsin winter, he went west. Two and a half years later, Daily graduated Pepperdine Law School and passed the bar a half-year ahead of his class. At 24, he was a practicing lawyer.

“If you have your mind set on something, get it done. Land the plane. Finish it,” advises Daily. This concept is captured in Jim Collins’ book “Good to Great: Why Some Companies Make the Leap and Others Don’t,” one of Daily’s favorite reads.

“Do one thing better than anyone else in the world and burn the ships behind you. I’ve been most successful when I focused on only one thing,” says Daily. “Spinning your wheels with too many opportunities, you’ll never get anything done.”

A Devastating Loss Changes His Course

Daily immediately started his law career in construction defect litigation, defending insurance companies and engineers at Morris Polich & Purdy. Then a tragic family loss changed his focus. “My 88-year-old great uncle was run over by a car while crossing the street. He died instantly, leaving his widowed wife. They were married for over 50 years.”

Daily helped his widowed great aunt make a claim against the negligent driver’s insurance company for their $500,000 automobile insurance policy. “We submitted the police reports and medical bills, and I wrote a personal letter.” Daily was shocked when the insurance company opposed paying the full value of the policy. An executive’s cold reply about his great uncle was, “Well, you know, he was old. His life just wasn’t worth very much.”

At that moment, Daily quit defending insurance companies and set out to sue them — as a personal injury lawyer at a new firm, Reinecke & Daily. He then zeroed in on businesses exploiting the elderly. “I went into elder abuse litigation, suing nursing homes for neglecting elders.” As a newfound champion of underdogs, Daily excelled: in 1997 and 2000, he was voted Personal Injury Attorney of the Year by Consumer Business Review.

Meanwhile, Daily’s experience dealing with insurance companies and businesses from both sides showed him how corporations avoid exposure by structuring their businesses to avert risk. This understanding would later help him build his practice in business litigation and asset management. 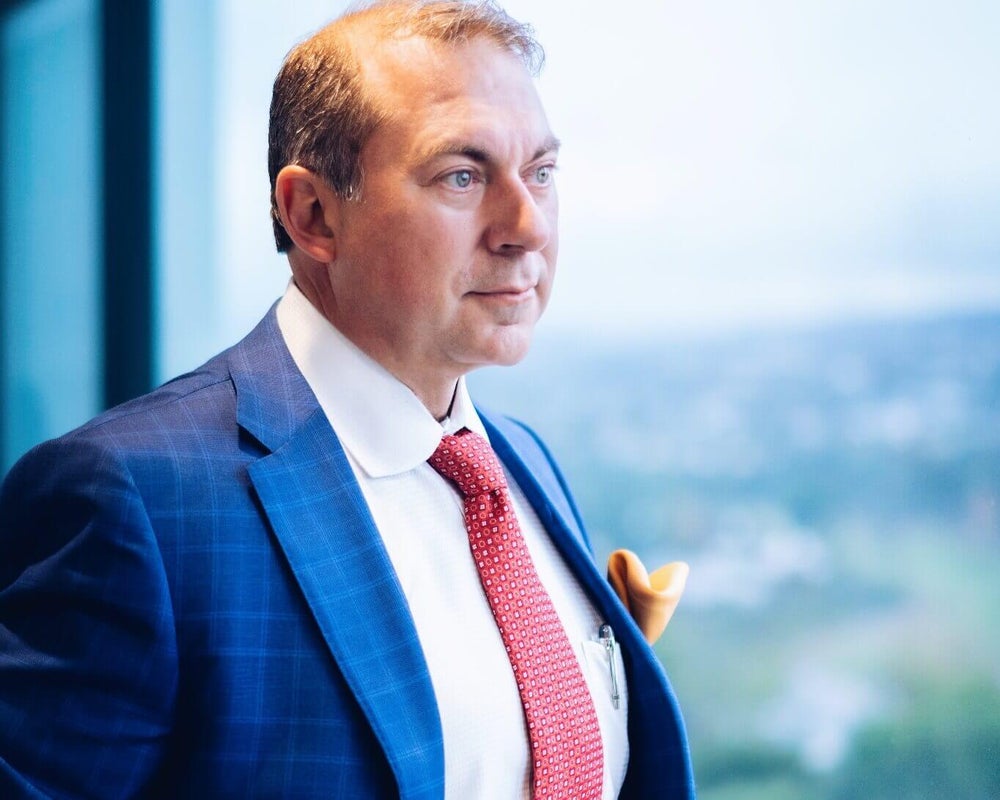 Daily quit defending insurance companies and set out to sue them instead.
Image Credit: James Daily

Punished for Being a Whistleblower

Daily’s expertise in business structures made him an asset to some of his friends, who were aspiring entrepreneurs. He soon found success protecting their assets. By 31, the young attorney had achieved a $34 million settlement in dot-com litigation, representing the founder of a company whose rights had been taken by business partners.

Fast forward to his 40s, when Daily was made trustee of an $800 million portfolio of assets largely consisting of pools of life insurance policies held by trusts established with monies from foreign banks. As trustee, he quickly detected a fraudulent scheme. “I saw that someone at the company had ‘misdirected’ $4.5 million. When I pointed it out to the grantor of the trust, the person returned the money and was fired.”

As retribution, the embezzler sold a largely fictitious story about the company’s finances to the Wall Street Journal. In the wake of the Bernie Madoff case, AIG going under, and the financial crisis, the investment community pulled out all their investments — tanking the company’s assets overnight. “The whole business of investment is based on trust,” shares Daily. “The embezzler cast a shadow of doubt on this legitimate business, and it ruined the company. The founder ended up committing suicide.”

While Daily wasn’t liable or responsible, international banks wanted their money back. “A limousine pulled up to my office with 10 attorneys and a banker, saying they had read the Wall Street Journal article.” Knowing that his records and business practices were beyond reproach, Daily immediately had all transaction records brought into his conference room and offered to turn over all his documents.

“I have a record of every single transaction and am happy to provide you everything you need,” Daily told them. “You might want to talk to the fund’s attorney first,” a lawyer replied. Daily soon found himself caught between competing international banks, a receiver, and the Justice Department’s investigation for the SEC.

Frustrated, the banks hit Daily with a lawsuit for half a billion dollars. “I just didn’t have a half-billion lying around,” says Daily. “It was obvious that the banks in Taiwan wanted to sue HSBC and sue them in California, though all their work was in New York City. They knew suing a California resident would allow them to keep HSBC in court in California. So my firm got sued with HSBC for $500 million.”

Meanwhile, the feds had taken an interest in the high-profile case and were calling his office. “I maintained meticulous records, allowing a receiver and the Justice Department to go through every document and shed light on the entire situation,” he recalls.

Eventually, Daily was cleared with zero liability, and the case was dismissed. Throughout the process, he got his first introduction to working with the federal government. “In that case, I met a lot of nice FBI agents,” he quips. Daily’s connection to the FBI and being on the front lines of crisis would later serve him — and others. “I was sued for half a billion dollars, and it could have crushed me. Instead, it helped me to get where I am today.” 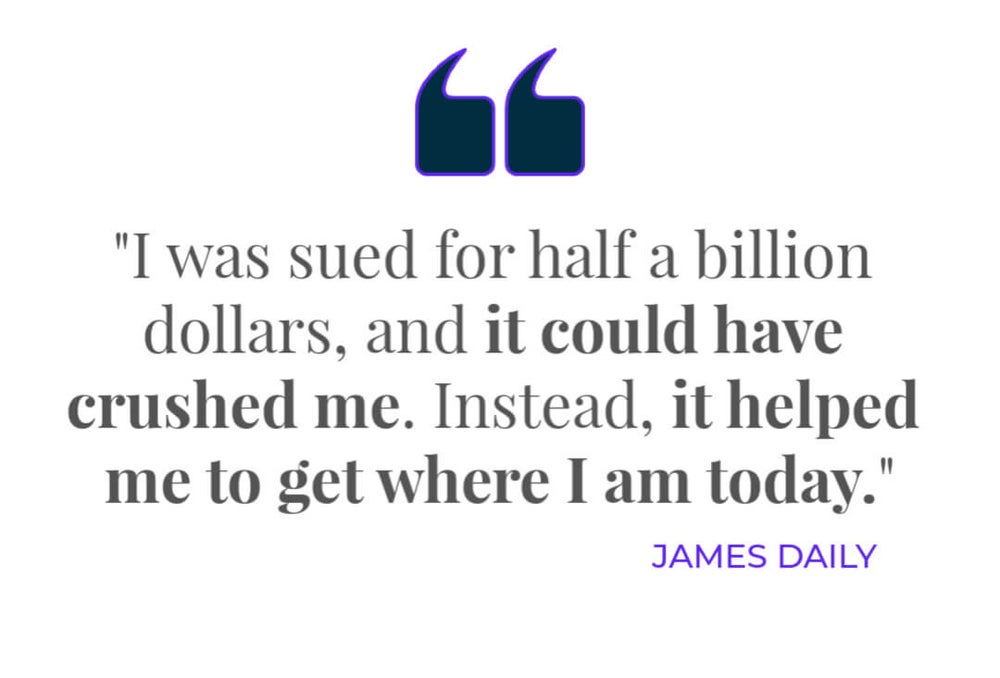 A Champion of Dairy Farmers and Underdogs

Shortly after, Daily took on a case in which heirs to a family dairy farm were being conned out of their inheritance. “One of the daughters came to me about another matter, but something smelled of fraud. I found out lawyers had hoodwinked the family, taking all their assets under the disguise of being ‘good stewards’ of their property,” remarks Daily.

“By that point, I understood life insurance policies and how people moved money to create financial structures to preserve them.” The family had been told not to talk to each other, which Daily says is a warning sign that someone’s trying to rip you off. “Fraudsters create unnecessary secrecy and division.”

Fortunately, Daily now had friends in the FBI. He reported the egregious fraud and helped an FBI agent go undercover to bust open the case. Meanwhile, Daily froze his clients’ assets, preventing the fraudulent lawyers from moving them around. He used an unorthodox approach — a restraining order. Daily was able to recover $30 million worth of property in one hearing. 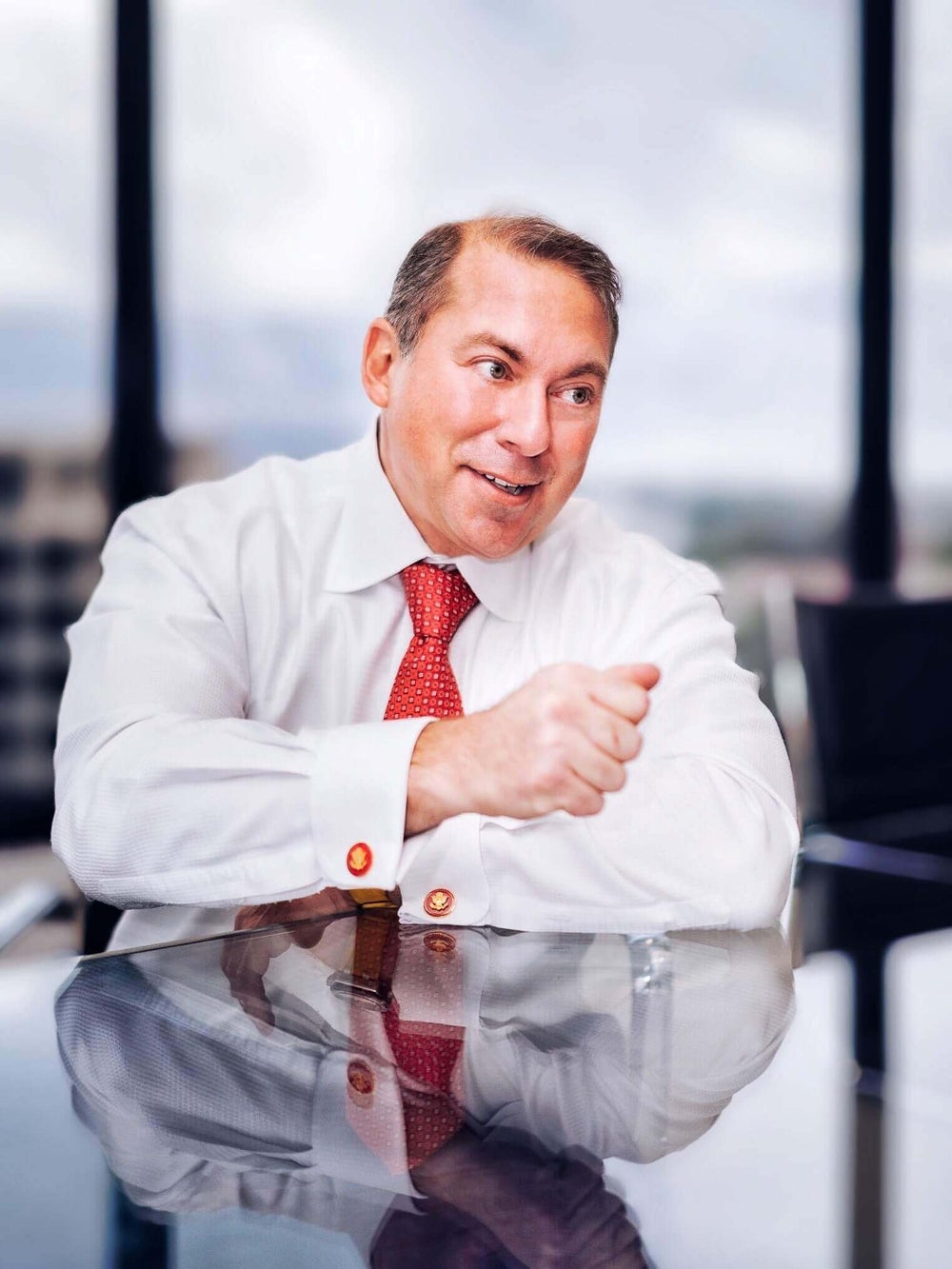 Daily has been involved in all kinds of cases, from helping the FBI go undercover to protecting citizens from exploitation by dictators.
Image Credit: James Daily

A Stalwart Believer in ‘Uberrima Fides’

While Daily has seen the worst side of human nature, he’s still a believer in the good. “As lawyers, we swear an oath of uberrima fides: utmost faithfulness. That’s what guides me.”

At 53, Daily is now a self-made millionaire and founding partner of his law firm, which helps high-profile clients with fiduciary abuse litigation, including fraud, crisis management, and business and family disputes. Seeing so many clients through crises has taught the attorney some lessons on how to survive and thrive.

“The people who survive are the ones who can adapt to change,” says Daily, who is living proof of this and whose practice has adapted along the way. 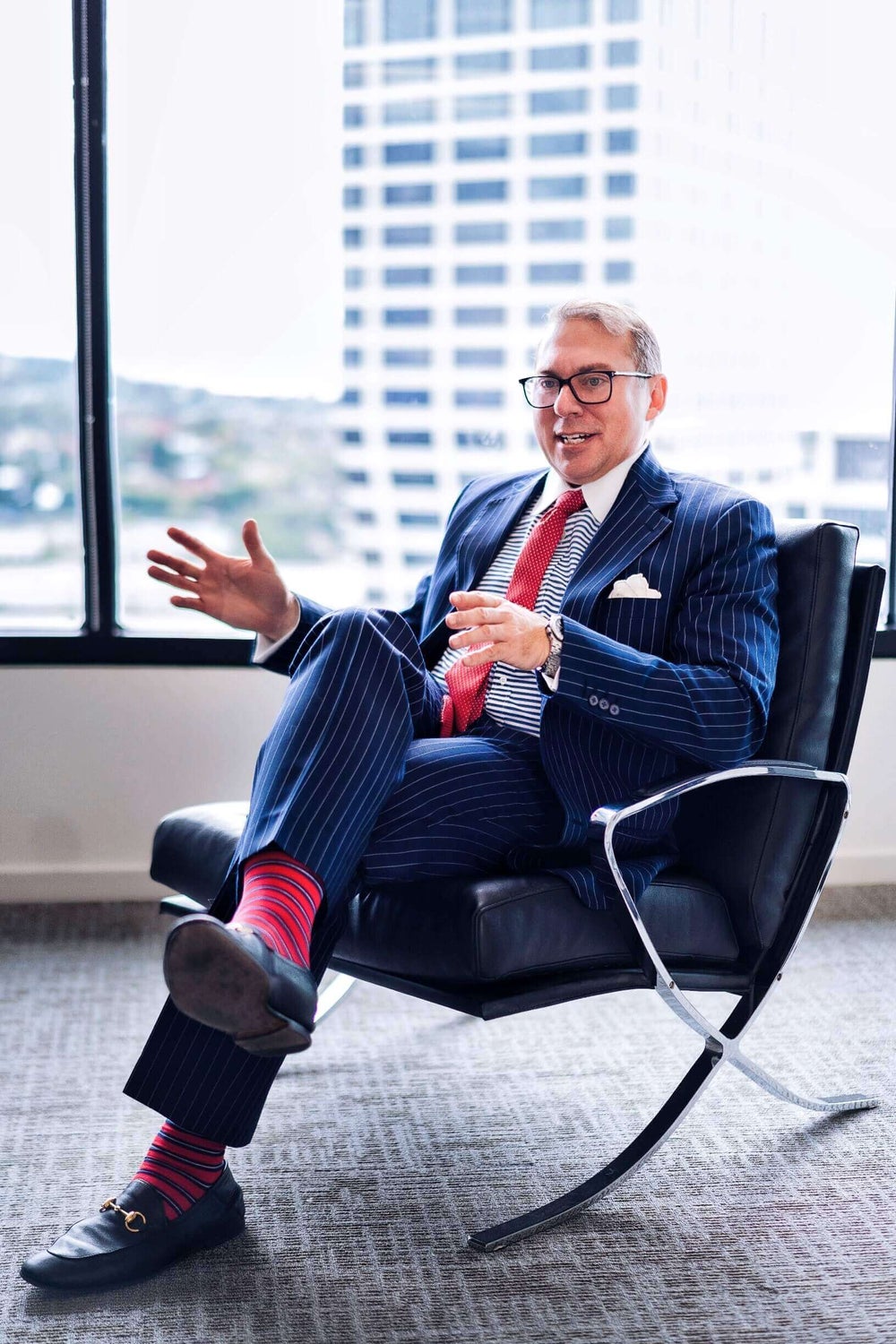 "The people who survive are the ones who can adapt to change," says James Daily.
Image Credit: James Daily

Daily is now working with the State Department. His expertise in fiduciary abuse led him to Washington, D.C., where he’s been asked to help protect citizens of international countries from exploitation by dictators. “I want to help people from countries who have had their resources stolen by their own leaders,” he shares.

In fighting for their rights, Daily insists that people are more powerful than they think. “Even the smallest dog can lift its leg on the tallest building.” Daily clearly isn’t afraid to lift his proverbial leg. “I’ve sued big publicly traded corporations, with billions behind annuity sales.”

When asked what fuels him, Daily shares that much of his motivation comes from his humble beginnings. “Where I grew up, it was simple. You were honest. You did the right thing. You served the community.” With his understanding of how corporations and governments work, he sees how the little guy can fall victim to theft or fraud if they don’t know the law. “After all, you don’t know what you don’t know.” Daily wants to protect people from this kind of exploitation.

“I see myself as karma. If someone Fs with the universe, I’m going to F with them. I will set it right.”

Connect with James Daily on LinkedIn or visit his website.