This Clean Energy Drink Provides a Brain Boost Without the Crash

Qualia Nootropic Energy is the 'smart' drink that doesn't rely on caffeine and sugar.

By Entrepreneur Deals March 19, 2020
Disclosure: Our goal is to feature products and services that we think you'll find interesting and useful. If you purchase them, Entrepreneur may get a small share of the revenue from the sale from our commerce partners.

Running your own business is a grind. After a while, it can start to take a serious toll, both physically and mentally. However, when you’re the boss, you can’t afford to let up. You have to stay sharp and focused at all times. That's why the innovative team of scientists and researchers at Neurohacker Collective have created a way to boost energy, focus, memory, and productivity without the all-too-common side effects of traditional stimulants and energy drinks. It’s called Qualia Nootropic Energy, and it’s the world’s first nootropic-based clean energy shot.

Statistically speaking, if you’re under the age of 50 and you run a business, you probably consume energy drinks on a somewhat regular basis. The global demand for energy drinks and shots has exploded over the last decade as consumers of all kinds seek new and improved ways to achieve peak mental and physical performance. Today, the global energy drink market is worth an estimated $53 billion in 2018, and industry analysts believe it will top $84 billion by 2026.

Of course, this dramatic spike in demand for energy drinks doesn’t have to be a bad thing. We all need a little pick-me-up from time to time to help us achieve peak physical or mental performance; something to spark motivation and get the creative juices flowing. In theory, energy drinks could provide that kick in the pants as well as all sorts of beneficial nutrients that promote overall brain health. It’s just that most of them don’t. Instead, they pump you full of caffeine, some B vitamins, and taurine, the long-term use is unknown. These help to wake your brain up, but don’t make your brain healthier so that it works better. 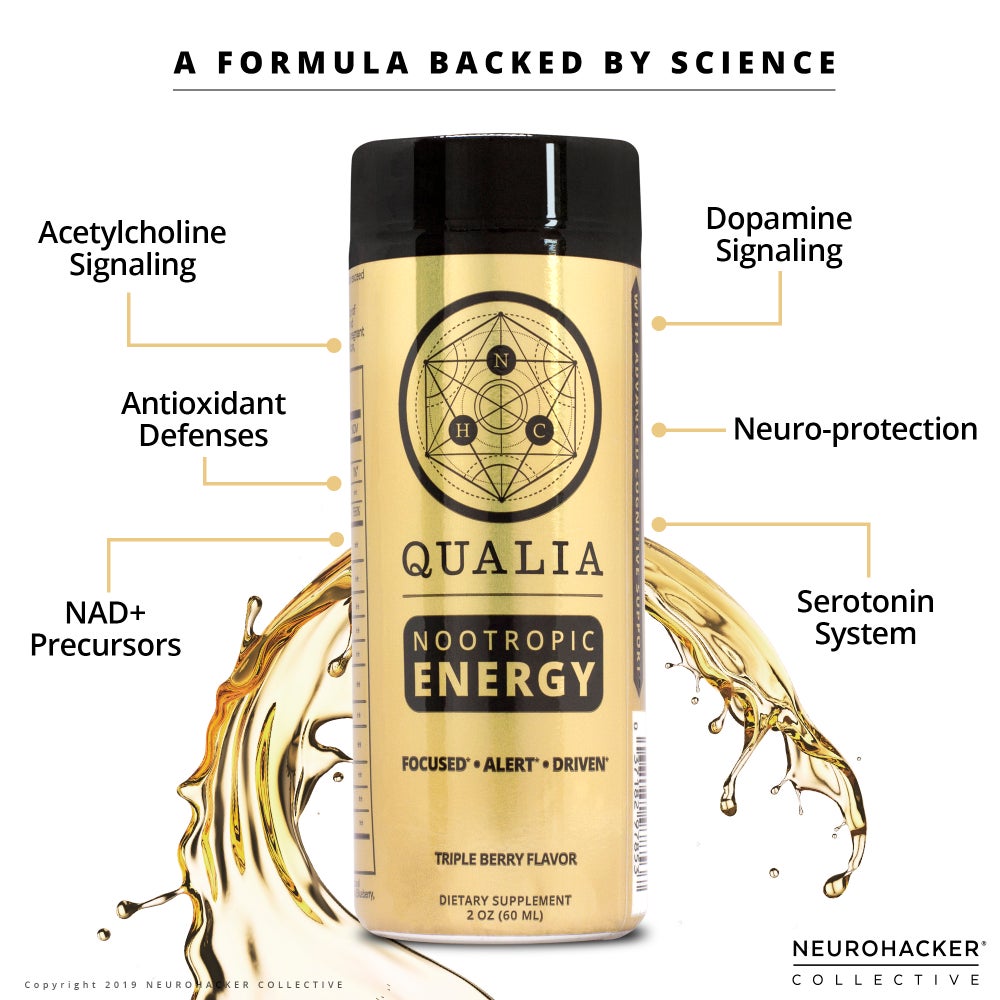 After years of research into brain function and neurochemical systems, the scientists at Neurohacker Collective identified specific physiological processes that are easily and quickly augmented by various nootropic compounds, vitamins, amino acids, fruit extracts, and herbal extracts. The result of this research is Qualia Nootropic Energy, a blend of 12 different nutrients that the Neurohacker team says can improve cognitive function and overall brain health.

Of course, many nutritional supplement companies make wild claims about what their products can do without backing those claims up with scientific data. Neurohacker Collective, on the other hands, says it is dedicated to science and transparency. That’s why they list every ingredient in Qualia Nootropic Energy, and explain what it is, what it does, how it works, and how it's sourced. They back up every claim with a list of scientific references.

The primary ingredients in Qualia Nootropic Energy, as the very name suggests, are nootropics. Sometimes billed as “smart drugs,” nootropics are actually just chemical compounds that the brain consumes and uses as fuel for the various processes involved in cognition. When taken in the right amounts, and in the right combinations, they have been shown to potentially enhance neuroplasticity and neurotransmission, which in turn boosts verbal fluency, critical thinking, memory, mood, stamina, alertness, and focus. Qualia Nootropic Energy contains four different nootropics. One of them is caffeine. However, each shot contains just 90mg, which is less than a typical eight-ounce cup of coffee.

To read more about the ingredients in Qualia Nootropic Energy, and the science behind them, click here.

Each two-ounce berry-flavored Qualia Nootropic Energy shot contains only 4g of sugar and 15 total calories. Shots come in packs of 20. New subscribers get 50-percent off their first shipment, plus 17-percent off all subsequent shipments.

Feeling skeptical? That’s good. If people were skeptical about the things they put in their body, there wouldn’t be so many inferior energy drinks out there. That’s why the Neurohacker Collective offers a free 100-day money-back guarantee if you don’t notice a marked improvement in your mental performance. They also have a free online cognitive assessment tool to help you track changes in cognitive function.

So, if you want an energy shot that can actually enhance the kinds of critical thinking skills that can help you manage your business more effectively, stop hitting your brain with a sledge-hammer of sugar and caffeine ever day. Click here to give Qualia Nootropic Energy a try, and see what cleaner, healthier, more efficient energy feels like. And don't forget to type in ENTRENEURO at checkout for 15-percent OFF your first purchase!