The national advocacy group's president explains why it's chosen to honor the landmark holiday by rolling out a new platform for finding and supporting black entrepreneurs.

Today is the 150th anniversary of Juneteenth, the day when, as retold on Juneteenth.com, "Union soldiers, led by Major General Gordon Granger, landed at Galveston, Texas with news that the war had ended and that the enslaved were now free."

For more than a century, the occasion has been acknowledged with local celebrations across the country. And in the wake of historic social unrest and calls to action following the killing of George Floyd, corporations and state governments are taking notice and making moves to acknowledge Juneteenth as a holiday and opportunity for reflection on par with July 4 or Martin Luther King Jr. Day.

That's made this year's sesquicentennial a particularly poignant moment for launching initiatives like the black-enterprise advocacy group U.S. Black Chambers' (USBC) new networking platform, byblack. In the website's own words, byblack is an attempt at "building the best tool to find and support Black entrepreneurs." 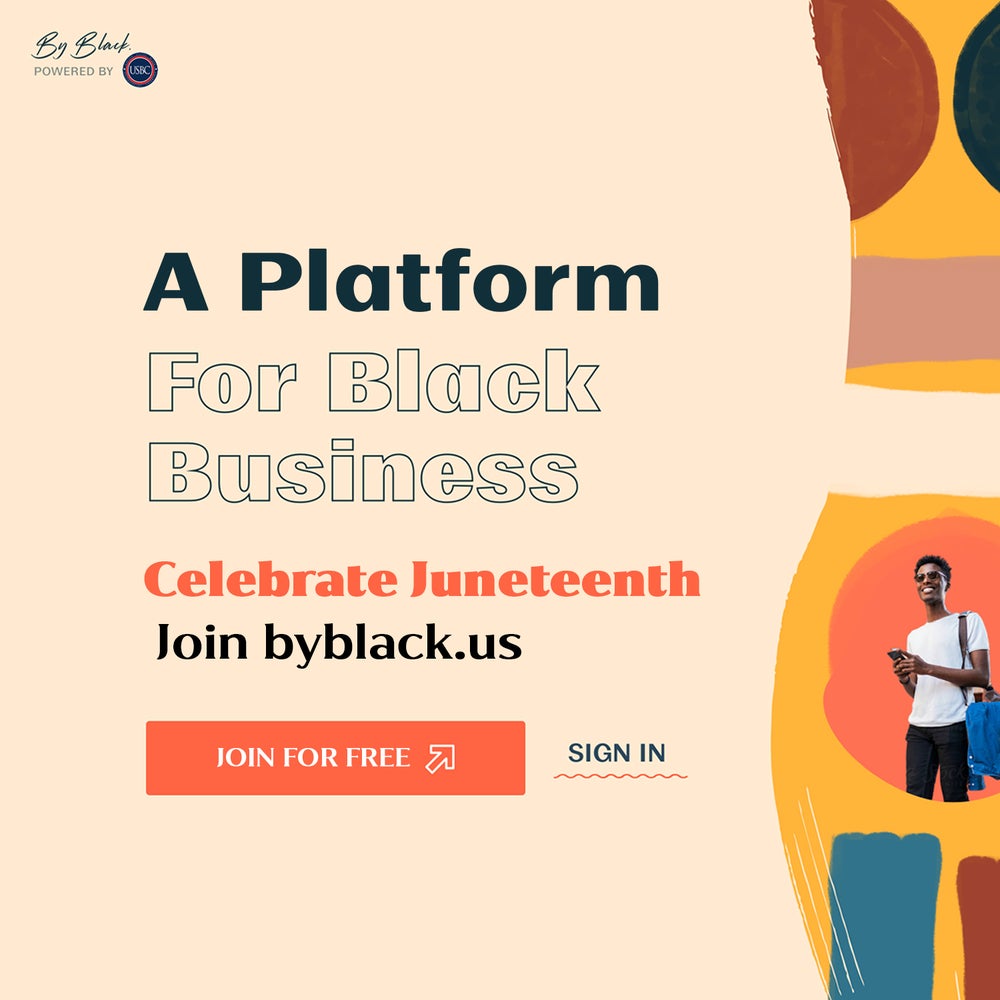 USBC President Ron Busby is an Oakland, Calif., native, which explains why byblack's Juneteenth-pegged soft launch is currently homed in on connecting professionals throughout his home city. But the networking resource will be gradually widening its reach nationwide (with added support from Google Maps technology) because, in Busby's belief, "This information should be owned by a black platform."

Speaking by phone on the eve of Juneteenth's 150th and byblack's official unveiling, Busby elaborated on the timing of its rollout and the continuing need to collect data on and cultivate black-owned businesses.

Was it always the plan to roll out byblack to coincide with Juneteenth?

It was always the plan. Understand this: I was born in Houston, Texas, so I've heard about Juneteenth all my life. I think white America is just hearing about Juneteenth. America is looking at all of the challenges we've had over the years and now trying to face the reality that Juneteenth happened and figure out how to have conversations about retributions and reparations. Some of it is about how to move forward, so you'll see people talking about giving paid leave on Juneteenth when last year they didn't even know what Juneteenth was. A lot of it is knee-jerk, but I am in favor of many of the actions as long as it is sustainable.

Is the right knee-jerk reaction, then, better than no reaction?

Each one of our protest movements has been built from the previous one, so I don't think anything has been unseen. I think America has now been forced to have the conversation because first was the pandemic of COVID-19, and we saw we were over indexed in deaths and obtaining the virus. Second was the stimulus package and the economic conversation that we felt. Black people saw America write a check for $2 trillion. Yet, we've had hundreds of thousands of people die that are black, and we're saying we've been facing a pandemic for hundreds of years, but yet we've never seen you have a conversation about writing a check to address the future of black people. When they first came out talking about $349 billion, we know that 50 publicly traded white firms got $250 billion of that and never had to answer any questions of where the money was going. And then they came back with, "Oh, if you got less than $2 million, don't even worry about it. Just keep it." What? You've got $130 billion sitting there that you didn't give out, and understand we lost 450,000 black-owned businesses. If they could have had their part of that, they'd still be in business.

Does this all speak to the ultimate imperative behind byblack?

One of the biggest challenges is data, specifically the number of black-owned businesses. All of that is extremely difficult to determine in America. It's not being captured by the SBA or Treasury or banks or even Facebook or Google. So we decided we were going to come out with this version of our platform so it could be more user-friendly and like other technologies, so it's not bad information in, bad information out. We created this technology ourselves. This is going to capture a lot of the data that has been missing.

So this could in fact be a useful tool for those other agencies and social media companies?

Right now, if you ask SBA or any of the agencies about real data, it's outdated, so we just said we were going to capture it ourselves. Many of the big tech firms, including Facebook, are now allowing you to self-identify as a black or Hispanic or Asian firm.

Is that a change that's only been happening very recently?

Very recently. We did a survey with Facebook last month concerning COVID and PPP [Paycheck Protection Program] challenges with 98,000 participants and never asked the question about race or nationality. It was a futile exercise for us. We wanted to know real data so we could have real conversations. Right now, a lot of the conversations are based upon emotion. It's ironic that we've been saying over the last few months that we were going to lose 35-40 percent of black-owned businesses, and no one really got it until Bloomberg stated we'd lost 41 percent of our black-owned businesses during February through April. And once that came out, everyone was like, "Woah." That's because it was real data. Part of the reason we're coming out with our new platform is we have to be able to capture timely, accurate information of where we are. There's also a huge contingency of people who want to support black-owned businesses but don't know how, so this is a tool for us to be able to address that.

Related: GM to Observe a Production Pause, 8:46 of Silence on Juneteenth

Is it fair to say that if something doesn't hit people where they live, data is all that resonates?

Exactly. It's like me telling you there's racism in the police department and you say, "Yeah, get over it," and then you see a video and you say, "Wow, it's real." And then you see multiple videos and you say, "OK, this is systemic." If I can tell you over and over again that there's systemic racism in lending practices and contractual practices, you can feel away that conversation, but when I can demonstrate it through data, that's a whole different conversation.... You've heard the old saying that the Asian dollar stays in their community 28 days, the Hispanic dollar stays in their community 21 days, the black dollar stays in our community less than six hours. If we don't change that, it doesn't matter what happens in reference to civil rights. If we don't have silver rights, we're always going to be in a condition of poverty. We have a trillion dollars of spend power. We hear that all the time. But that's not black people talking about that. That's white corporations saying, "Black consumers spend a trillion dollars every year. Let's make sure we market to them." But we have to change the conversation to, "Let's keep that trillion dollars in our community to make sure we have sustainable economic conditions that are positive for black people."

Do you view byblack as a way to incubate that?

In the long run, what do you hope something like byblack becomes emblematic of?

I would like to remove unemployment for black people across the country. And it's simple. If we have 1.6 million black-owned businesses or whatever the number is, if each one of those firms could hire one black person, I don't have unemployment in my community, anywhere in America. And all we have to do is spend a little bit more of our money with our local black owners. We have enough economy within our own community to eliminate unemployment, which means there will be full unemployment for African Americans in America, which would change the conversation of our own economy, because we would be hiring one another and spending money within our own communities, celebrating our own accomplishments, putting money in our own black-owned banks. We have got to make sure our economy stays in our community.