Here's What You Need to Know About the Bitcoin Scam That Hacked the Twitter Accounts of Jeff Bezos, Elon Musk, Bill Gates and Others

“I am giving back to the community,” began a tweet that promised to double any Bitcoin donations made by followers. 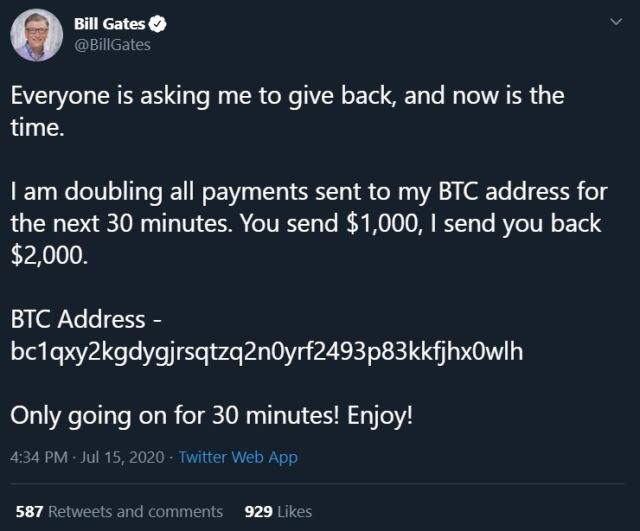 The Bitcoin wallet where followers were asked to send money received more than $118,000 before Twitter locked down all verified accounts to shut down the scam. “You may be unable to Tweet or reset your password while we review and address this incident,” the company explained in a tweet.

Related: 5 Biggest Credit Card Scams and What You Can Do to Protect Yourself

Jack Dorsey sent out the following tweet to address the situation:

Tough day for us at Twitter. We all feel terrible this happened.

We’re diagnosing and will share everything we can when we have a more complete understanding of exactly what happened.

Shares of Twitter dropped by more than 4 percent in the aftermath, losing approximately $1.3 billion in market value.

'I Blundered the Execution': CEO Issues Apology After Brutally Laying Off 900 Employees

Bill Gates Gets Emotional About Divorce, Empty Nesting: 'It's Been a Year of Great Personal Sadness For Me'