Read on to decide whether to join the hottest online club in town.

By Jordan Minor January 21, 2021
This story originally appeared on PCMag

If you’ve heard anything about Clubhouse, the new social network, it’s probably that you can’t join it. Currently in beta, this audio-based iPhone app requires an invitation to join, invitations that aren’t easy to come by. While this restriction surely makes testing easier for the developers, it also gives Clubhouse a sense of exclusivity bordering on pretentious, depending on which wealthy users you follow. However, if you seek out people, groups and topics that genuinely interest you, Clubhouse fosters truly fascinating conversations.

You don’t need to sweet talk a bouncer to join Clubhouse, but the sign-up process feels nearly as arduous. First, you need an iPhone, as Clubhouse isn’t available on the web or on Android devices. I tested using an iPhone 11. If you haven’t already received an invite, you request and reserve a user name using your phone number. Even if you have an invite, you’ll need a phone to verify your account. Once Clubhouse decides it’s ready for you, you’ll get a text to create your account. That could take weeks or months, if it even happens for you at all. At least it's free. 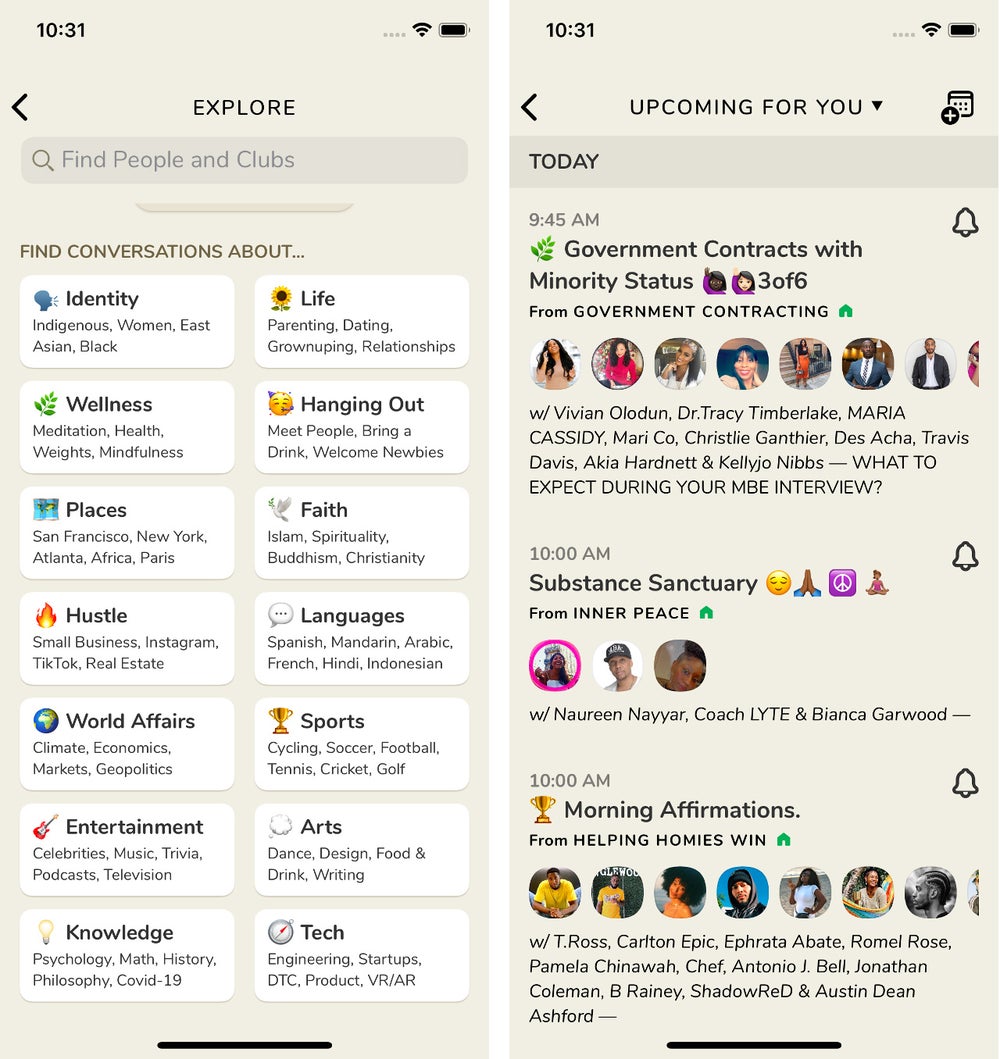 Related: How Clubhouse Is Creating Unprecedented Opportunities and Access

When it’s time to build your profile, you can either start from scratch or import information from your Instagram and Twitter accounts. You can search your contacts to find other existing Clubhouse members you might know. Clubhouse suggests big-name accounts for you to follow, from actors to activists to venture capitalists. Yes, I will follow Ava DuVernay. No, I won’t follow Jared Leto. Shout out to gaming personality and recent Pop-Off guest Erin Ashley Simon.

You also get two invites to give to friends. I gave one to my fiancée, and I’m hoarding the other one like the rare resource it is, although I have gained a few more since testing. Clubhouse currently has around 600,000 members. For comparison, Twitter has 330 million users, while Facebook has 2.7 billion users.

Arguably more important than following people is following clubs and topics. This is the quickest way to connect to conversations you’ll want to join. Clubhouse has a vast amount of topics to explore across different categories. Under technology, you can enter communities for music, movies and gaming. Follow conversations about wellness, technology, relationships and dozens of other rich veins for potential gossip, advice and general discourse.

The best way I can describe Clubhouse is, “What if Twitter was a podcast you lived inside of?” Instead of a news feed full of posts, the messy main page is full of relevant clubs with live vocal conversations happening at that given moment. You can view a schedule of upcoming talks so you don’t miss anything, but I preferred to float between different discussions already in progress. You can search for other conversations while ear-deep into Clubhouse convo.

I listened to some wildly entertaining and occasionally insightful gab sessions by doing this; it's like wandering the halls of a never-ending convention about anything and everything. I heard radical reactions to Trump’s impeachment. I even promoted my Spellbreak review in a club for Black video game live streamers talking about battle royale games. Music Mode makes it easy for underground artists to pipe in high-quality audio for the audience.

Clubhouse is an audio-only experience, and the lack of video removes a surprising amount of awkwardness in interacting with strangers online. Maybe it’s because I didn’t have to worry about unflattering angles and accidental eye contact.

As someone who doesn’t care at all about chasing clout, I especially appreciate Clubhouse’s strong communities of color. The BIPOC voices on these modern ad-hoc radio stations provide a thoughtful and much-needed counterpoint to all vacuous, wealthy, back-patting echo chambers on Clubhouse that often left me fantasizing about 18th century French guillotines. New age spirituality is for California hippies, not California executives.

At times, Clubhouse sounds like a cacophony. I used the “leave quietly” to peace out of many talks that just went nowhere or were full of desperate folks looking for more followers. Adding to the chaos, Clubhouse offers no transcriptions, and recording without permission is heavily frowned upon. You’re lucky enough to be among the select few to hear these ephemeral musings from our brightest online minds and most innovative influencers. This makes talks feel more private, privileged and precious, but this system also makes it hard to enforce accountability. There are already reports of celebrities saying irresponsible stuff on Clubhouse since there are few ways to really prove they said it. 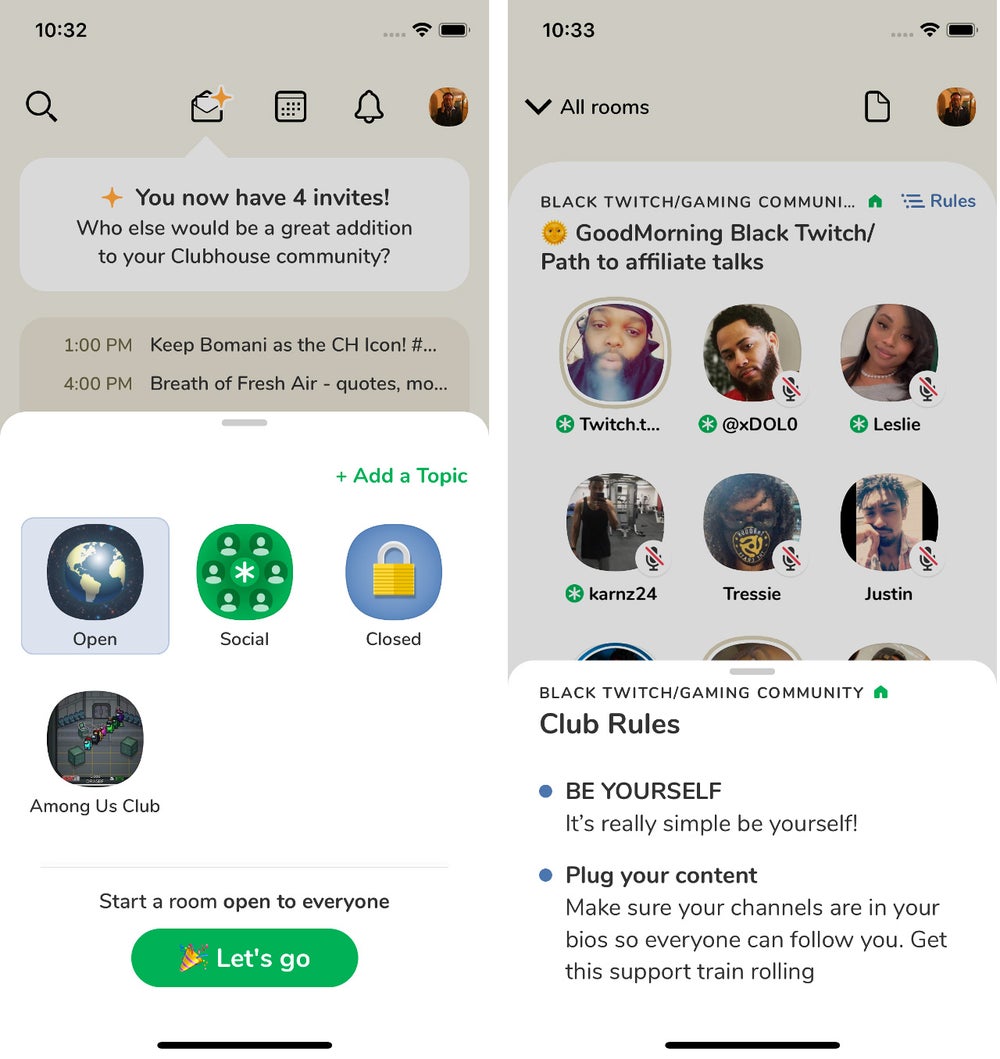 The app has smart structures in place to keep the experience from devolving into a total mess. Before you join a club, you must read the personalized rules created by the club’s organizers. Community moderation tools let you report toxic users. Featured speakers can talk freely, but for audience members to add to the conversation they must first raise their virtual hand and wait for approval from the speakers and organizers, like standing in a Q&A line during a panel. This prevents hundreds of people from talking over each other. Some discussions don’t let the audience contribute and force you to stay mute the entire time.

Clubhouse has more than enough clubs and topics to fill your plate, but if you think it’s missing one you can submit your own proposal for a new club. Active users can submit their club proposals to Clubhouse and wait for a response. They’re community-generated affairs, like Facebook groups, and swing wildly between popular and niche. A Nigerian identity group has more 20,000 members. An Among Us virtual meetup group has about 100 members. Still, they’re both valid within the community. Alternatively, you can create and schedule your own events and add any of your followers as guests and co-speakers. Events can be hosted by clubs or exist independent of them.

You don’t need to create or join a themed club to talk on Clubhouse. You can also always start a random room and chat there. You can either open your room to everyone, open it to people you follow, open it up to your clubs or create a private room and select who gets to join. However, using Clubhouse as just another social chat app with friends feels like missing the point. Houseparty provides a far better way to hang out with friends online, with far fewer snobby hoops to jump through. To get the most out of Clubhouse, you should engage with its unique events, communities and famous faces. You could also use Cameo if you want to talk to celebrities...for a price.

Clubhouse is an undeniably eye-rolling Silicon Valley product. It’s an invite-only, beta app full of rich people who can’t wait to pitch and sell their next invite-only beta app for millions of dollars they don’t need. Still, Clubhouse can also guide you toward illuminating conversations, particularly those focused on non-mainstream topics. Those worthwhile conversations will hopefully grow more numerous the more Clubhouse opens its doors. So, if you’re still waiting to get in, don’t feel bad. Let Clubhouse work out all of its kinks on us extremely entitled guinea pigs, and sign up later.

Top Apps and Software Entrepreneurs Can Get for Black Friday