The stock market has been witnessing a short-squeeze wave over the past few months, driven primarily by the actions of a group of millennial investors seeking to squeeze short sellers out of their positions by betting against them on the stocks of struggling businesses. In the booming electric vehicle (EV) market, we think struggling players Nikola (NKLA), Blink Charging (BLNK), and Workhorse (WKHS) could be the next short-squeeze targets. Let’s discuss this.

By Sidharath Gupta May 7, 2021
This story originally appeared on StockNews
The stock market has been witnessing a short-squeeze wave over the past few months, driven primarily by the actions of a group of millennial investors seeking to squeeze short sellers out of their positions by betting against them on the stocks of struggling businesses. In the booming electric vehicle (EV) market, we think struggling players Nikola (NKLA), Blink Charging (BLNK), and Workhorse (WKHS) could be the next short-squeeze targets. Let’s discuss this.

Growing investor excitement  about the automotive sector going electric was reflected in electric vehicle (EV) stocks’ impressive rally in 2020. Improved automotive performance, government subsidies, and cost-efficiencies have been motivating  consumers to switch to EVs. As a result, the booming EV space has been birthing many new companies, arguably overcrowding the industry.

But  not all the players in this booming market possess sound fundamentals. In fact, many EV players have been witnessing corrections this year due to investor concern over the industry’s overvaluation, and production delays due to a global  semiconductor  shortage. Investors’ bearish outlooks are often manifested in their short-selling activity as they bet against stocks that they believe have become overvalued relative to the fundamentals and are due for a pullback. Short percentage of float is one of the commonly used metrics for understanding how aggressive a stock's short sellers have been. Thanks to the actions of Reddit's WallStreetBets forum, many investors have lately been introduced to the short squeeze. Experts believe that this bullish market may keep the trend going and many highly shorted stocks could get caught up in this short squeeze frenzy.

Nikola Corp. (NKLA), Blink Charging Co. (BLNK), and Workhorse Group, Inc. (WKHS) are three EV players in the EV market that have been aggressively shorted by investors. Their weak fundamentals and other recent developments are raising red flags and, hence, we think it could be wise to avoid these stocks now.

NKLA is an integrated zero-emissions transportation systems provider. It designs and manufactures battery-electric and hydrogen-electric vehicles, drivetrains, energy storage systems, and hydrogen fueling station infrastructure. NKLA has been all over the news since last year because  investors have accused the company of being "an intricate fraud built on lies" based on alleged false statements by its founder, Trevor Milton.

Milton stepped down following a scathing report by short-selling firm Hindenburg Research that accused him of fraud, and the company later admitted  to faking a video of its prototype electric hydrogen truck driving last September. . In fact, NKLA has been facing several controversies post the Hindenburg report. On March 27, Kahn Swick & Foti, LLC (KSF) began an investigation in response to allegations that the company had failed to disclose material information and violated federal securities laws. Furthermore,  the company’s head of fuel cell development stepped down at the beginning of this month, and the company's executive vice president of technology, hydrogen, and fuel cells left the company on April 1. These moves have  weighed heavily on the stock.

NKLA is a pre-revenue company that has not yet produced any products  and doesn't even possess a manufacturing plant.  The company is scheduled to release today its  financial results for the first quarter, ended March 31, 2021. Its loss from operations has increased 425.7% year-over-year to $146.84 million in the fourth quarter. Its net loss has increased 459.7% from its year-ago value to $147.10 million. The company plans to begin trial production by the third quarter of 2021 in the Coolidge manufacturing facility in Arizona and anticipates starting the production of its Nikola Tre in the fourth quarter of 2021. Wall Street analysts expect NKLA’s current year EPS to decline 80.6% year-over-year.

NKLA signed a letter of intent with port trucking firm Total Transportation Services Inc yesterday. It involves trials for and  a possible order of 100 vehicles from the electric-truck maker. NKLA also joined hands with TravelCenters of America last month to develop a network of hydrogen fueling stations for heavy-duty trucks that will span the United States. However, these alliances are being viewed with skepticism after its  General Motor (GM) deal turned sour last  November, and NKLA discontinued  collaboration on refuse truck development with Republic Services, Inc. (RSG) in December 2020.

NKLA’s POWR Ratings are consistent with this bleak outlook. The stock has an overall F rating, which equates to Strong Sell in our proprietary rating system. The POWR Ratings are calculated by considering 118 different factors with each factor weighted to an optimal degree.

NKLA has an F grade for Value, Stability and Quality. It is currently ranked #49 in the 53-stock Auto & Vehicle Manufacturers industry.

In total, we rate NKLA on eight different levels. Beyond what we stated above, we have also given NKLA grades for Momentum, Sentiment and Growth. Get all NKLA’s ratings here.

Click here to check out our Automotive Industry Report for 2021

BLNK is scheduled to release the earnings report for the first quarter, ended March 31, 2021, on May 13. In the fourth quarter, BLNK’s revenue surged 250% year-over-year to $2.5 million, driven primarily  by robust demand for its commercial and residential products. BLNK deployed, sold, or acquired 1,136 commercial and residential EV charging stations. Notably, the number of commercial Blink-owned charging stations contracted or deployed during the quarter grew by 51%. However, the company’s loss widened, and its net loss came in at $7.9 million, compared to the year-ago loss of $2.9 million.

The accelerating adoption of EVs worldwide  represents an enormous opportunity for EV infrastructure providers. And BLNK  is expanding its footprint and growing its brand recognition by capturing premium locations. However, BLNK’s charging stations are set up based on a revenue-sharing business model, implying that the company must monetize energy sales  to recover installation costs. Hence, this setup forces BLNK to charge its customers more compared to its peers. Notably, BLNK’s EPS is expected to remain negative in fiscal 2021 and fiscal 2022, and analysts expect the company’s current quarter and current year EPS to decline 54.5% and 3.4%, respectively.

BLNK is highly overvalued in terms of forward EV/Sales (136.85x versus 1.42x). It has  lost more than 30% over the past three months. In fact, the stock closed yesterday’s trading session at $32.27 after tumbling 6.9% intraday. And even though NKLA currently  trading nearly 50% below its 52-week high of $64.50, the stock is still up 1,880% over the past year. Not surprisingly, BLNK still has a short float of 37.76%, indicating that the stock has been highly shorted.

BLNK’s POWR Ratings reflect a bleak outlook. The stock has an overall F rating, which translates to Strong Sell in our proprietary rating system. BLNK has an F grade for Value, Stability, and Quality. It is ranked #87 of 87 stocks in the B-rated Industrial – Equipment industry.

WKHS designs, manufactures, and sells electric, high-performance, drone-integrated electric vehicles to the last-mile delivery sector. The company’s products include medium-duty trucks, powertrains and chassis. Over the past year, the company garnered approvals from all 50 states, making it the only company with EV delivery licenses for operation nationwide. It  recently begun the production of its C-series electric step vans.

WKHS was in the spotlight all through 2020 because  it was one of three finalists shortlisted for a $6.3 billion, 10-year contract to supply the U.S. Postal Service (USPS) with new-energy vehicles. However, a huge controversy developed  in April around the fact that the contract was not awarded to WKHS. Short-selling firm Fuzzy Panda Research  released a report in October stating that WKHS misled investors as it vied for the USPS contract and claimed that the company’s vehicles are plagued with issues and that it exceeds maximum cost guidelines.

Fuzzy Panda also said WKHS’s one-time partner, VT Hackney, had already backed out of the bid due to “critical failures and breakdowns.” Adding to the concerns, the company is currently facing multiple class action lawsuits over allegedly  making false and misleading statements. According to the complaint, WKHS had no solid indication that  USPS would select an electric truck as its Next Generation Delivery Vehicle and was instead merely hoping that would be the case.

WKHS will hold a conference call on May 10 to discuss its earnings report for the first quarter, ended March 31. Revenues for its fiscal year 2020 came in at $1.39 million, representing a substantial rise from its $0.38 million  year-ago revenue. However, the company’s cost of sales rose substantially and, hence, it reported a $11.67 million gross loss for the year. The company posted profits as other income surged nearly 1940% year-over-year to $323 million. As a result, its EPS was $0.70 compared to a $0.58 year-ago loss per share. Wall  Street analysts expect the company’s current year EPS to deteriorate 182.9% year-over-year.

In January, WKHS received a purchase order for  6,320 all-electric delivery vehicles from Pride Group Enterprises. Notably, the company had a backlog of 8,000 vehicles as of March 1, combining all purchase orders received. However, WKHS has not yet commenced commercial production and plans to build only 1,800 vehicles in 2021. WKHS has still been reporting negative gross margins and the company is not expected to post profits until 2023.

WKHS’ weak fundamentals are reflected in its POWR Ratings. The stock has an overall F rating, which translates to Strong Sell. The stock also has an F  grade for Growth, Stability and Quality. It is ranked #51 in the Auto & Vehicle Manufacturers industry.

About the Author: Sidharath Gupta 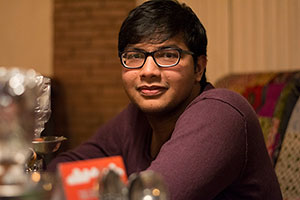 Sidharath’s passion for the markets and his love of words guided him to becoming a financial journalist. He began his career as an Equity Analyst, researching stocks and preparing in-depth research reports. Sidharath is currently pursuing the CFA program to deepen his knowledge of financial anlaysis and investment strategies.