Is Tesla Setting Up for a Big Move?

An up-channel chart pattern has formed in the chart of Tesla, Inc. (TSLA). If the stock breaks through the channel resistance, a breakout could occur....

By Christian Tharp September 1, 2021
This story originally appeared on StockNews

An up-channel chart pattern has formed in the chart of Tesla, Inc. (TSLA). If the stock breaks through the channel resistance, a breakout could occur. Read more to learn how to take advantage of this trading opportunity.

Tesla, Inc. (TSLA) is a vertically integrated sustainable energy company that also aims to transition the world to electric mobility by making electric vehicles. The company also sells solar panels and solar roofs for energy generation plus batteries for stationary storage for residential and commercial properties including utilities.

In the second quarter, TSLA’s quarterly profits hit $1 billion for the first time. Driven by strong demand for both the Model 3 and Y, the company achieved record production and deliveries. Plus, the construction of its Berlin and Texas gigafactories is on track.

The company had $16.2 billion in cash on hand at the end of the most recent quarter. This compares favorably to short-term debt of only $1.1 billion. Earnings were up 232.6% year over year and analysts expect earnings to rise 81.6% year over year in the current quarter.

The stock appears overvalued with a trailing P/E of 381.2 and a forward P/E of 149.25. TSLA’s stock has shown bullish momentum since mid-May as shown in the chart below.

Take a look at the 6-month chart of TSLA below with my added notations: 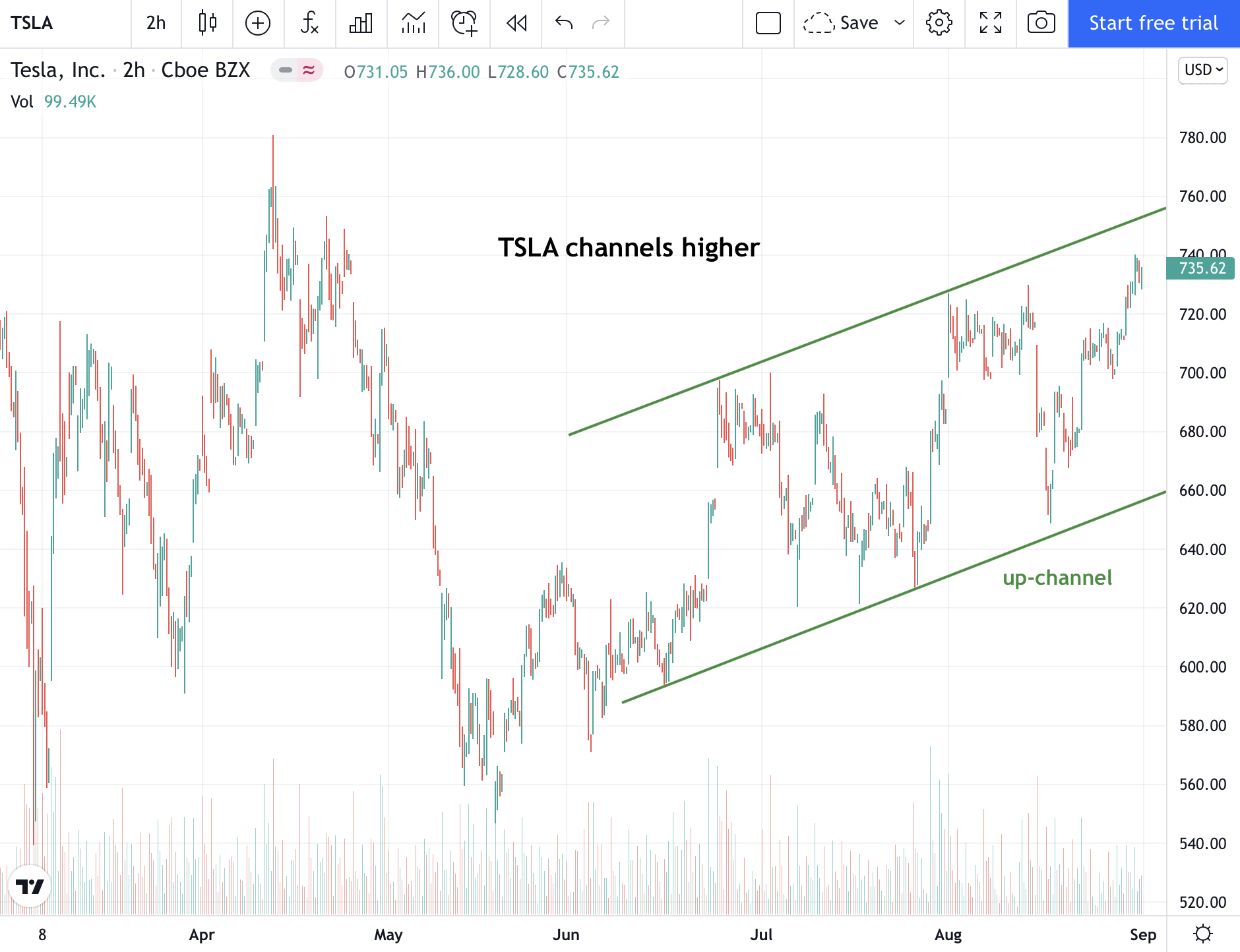 Chart of TSLA provided by TradingView

TSLA has formed an up-channel chart pattern over the past few months. A channel is formed through the combination of a trend line support that runs parallel to a trend line resistance.  When it comes to channels, any (3) points can start the pattern, but a 4th test or more helps to confirm it.

Tesla, Inc. (TSLA) is a part of the Entrepreneur Index, which tracks some of the largest publicly traded companies founded and run by entrepreneurs.

The post Is Tesla Setting Up for a Big Move? appeared first on StockNews.com