Is Amicus Therapeutics Headed for a Breakout?

A resistance line and an ascending support line has formed in the chart of Amicus Therapeutics Inc. (FOLD). If the stock breaks through this resistance level, a breakout is expected....

By Christian Tharp November 3, 2021
This story originally appeared on StockNews

A resistance line and an ascending support line has formed in the chart of Amicus Therapeutics Inc. (FOLD). If the stock breaks through this resistance level, a breakout is expected. Read more to learn how to take advantage of this trading setup.

Amicus Therapeutics Inc. (FOLD) is a biotechnology company focused on discovering, developing, and delivering medicines for people living with rare metabolic diseases. It has a portfolio of opportunities, including oral precision medicine for people living with Fabry disease, a clinical-stage treatment paradigm for Pompe disease, and a rare disease gene therapy portfolio.

The company’s Galafold therapy received label expansion in the EU over the summer. This is expected to increase sales. Plus, its lead pipeline drug, AT-GAA, is being evaluated for Pompe disease. The FDA is expected to make a decision on AT-GAA some time next year. If approved, the drug has a lot of potential for growth.

FOLD has a current ratio of 4.3, indicating it has more than enough liquidity to handle short-term obligations. Over the past three years, sales have grown an average of 165.6% per year and revenues are expected to rise 37.2% over the next year leading to a Growth Grade of B in our POWR Ratings system.

However, the stock appears overvalued with a price-to-book ratio of 14.9. This is well above the industry average of 8.1 and the S&P 500’s 5.0. FOLD has been showing mixed performance since February, but has been trending up over the last few days. This is evident in the chart below.

Take a look at the 1-year chart of FOLD below with my added notations: 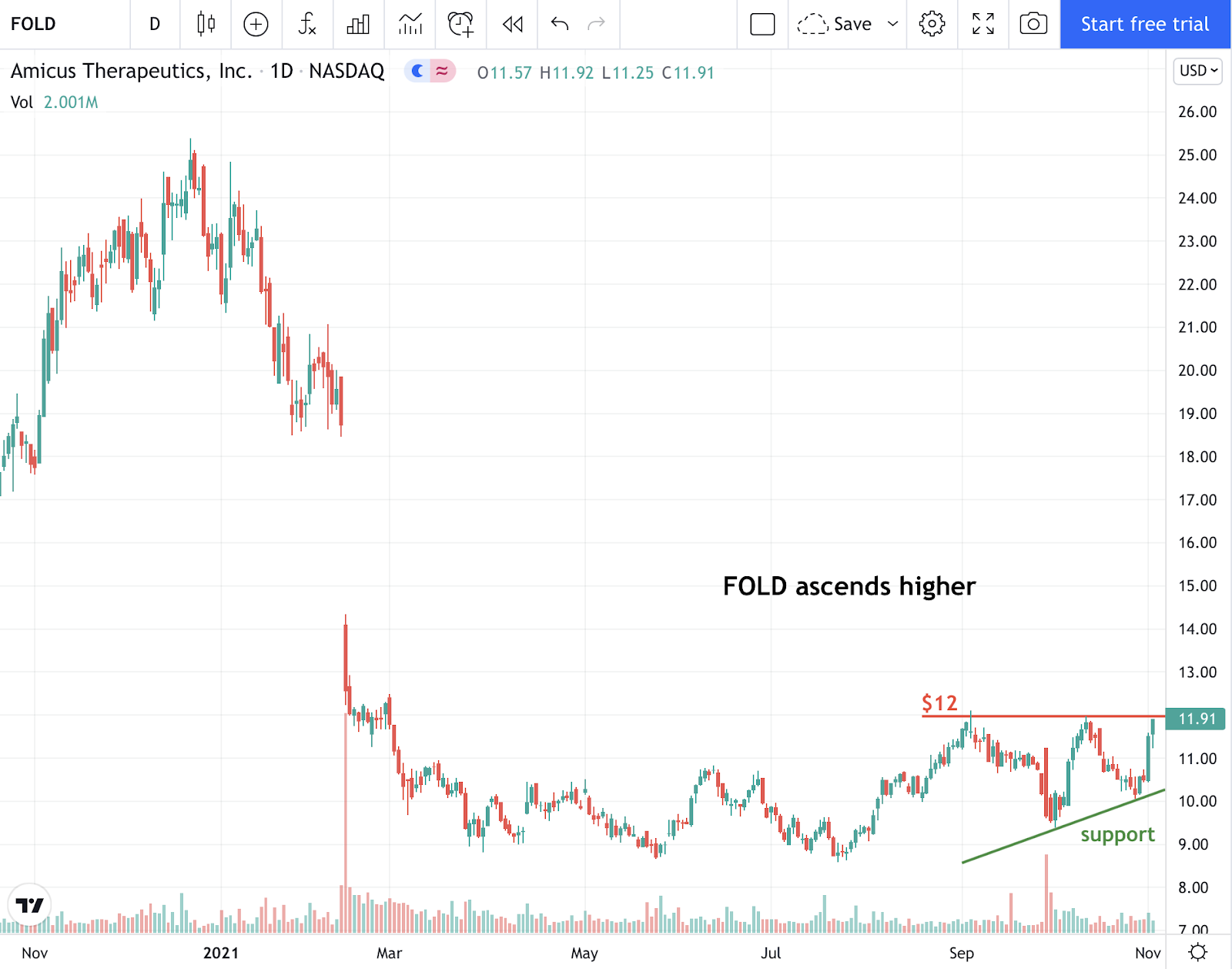 Chart of FOLD provided by TradingView

FOLD has stalled at $12 resistance (red) more than once over the past couple of months, while also forming a trend line of support (green). These two lines form an ascending triangle in the stock.

Eventually, FOLD will have to break either the $12 resistance, or the triangle support. A long trade could be made on a break above the $12 resistance level. A break below the trendline would be an opportunity to enter a short trade.

The post Is Amicus Therapeutics Headed for a Breakout? appeared first on StockNews.com