Apple Is Deliberately Going Into a Yearlong Lull

So far, the rumors about Apple's development of iPhone 7 -- set for launch later this year -- suggest two things:

Now Timothy Arcuri and his team of analysts at Cowen & Co. have come up with a theory about why Apple might be going into a yearlong lull right now.

A "powder keg is forming in the installed base" of iPhone customers, Arcuri argues: Currently, the portion of existing iPhone customers who might be expected to upgrade into iPhone 7 is about 33 percent, a number that has been consistent for the last six quarters, Arcuri writes. But through the next five quarters, that portion will go up to 43 percent.

That means "a 'super-cycle' is setting up for iPhone in '17," Arcuri says.

Because the 43 percent of upgraders next year will generate more sales than the 33 percent this year, it make sense to land the next significant iPhone upgrade into the bigger wave of sales, rather than launch it this year into an installed base where fewer people actually need a new one. "iPhone 7 is simply a 'bridge' to get to a 'super-cycle' for iPhone launch a year from now. iPhone 7 is clearly more 'evolutionary' than a normal tick/tock version (force-touch home button, no headphone jack, waterproof, bevel-less full screen, no wireless charging), but the old iPhone/iPhone S tick/tock design paradigms are breaking down," Arcuri says:

"Maybe the reason why the iPhone 7 is not a big design innovation is because it realizes the aging dynamics of the base and saw this coming years ago, choosing to save the true cycle of innovation for when the base would be incredibly ripe. Ergo, we conclude that either 1) iPhone 7 sells better than expected due to this aging base, or 2) iPhone in 2017 will be a super-cycle, especially if we are right about a new innovative OLED-enabled form factor."

There are about 575 million iPhone units in existence. That would imply something like 275 million iPhones might be replaced through next year. Here is a chart from Cowen showing how big that installed base is: 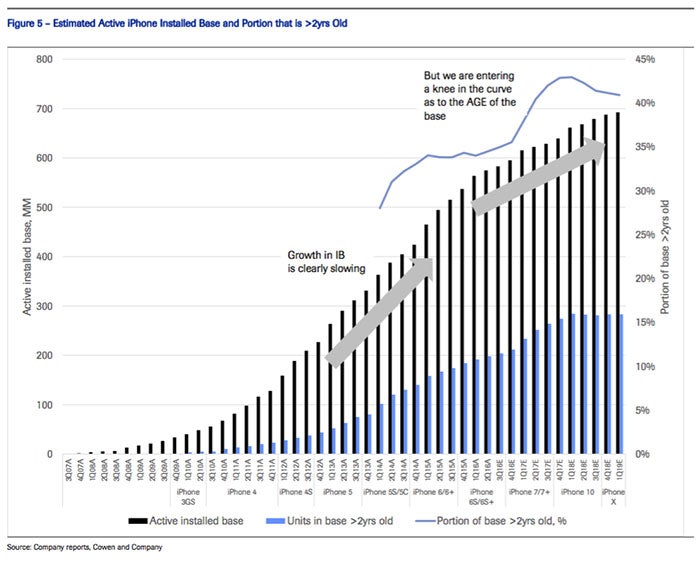