Amid stagnant growth and declining profits, Apple is pouring money into research and development.

By Rob Marvin
August 2, 2019
This story originally appeared on PCMag

Though Apple's services, wearables, and accessories products are still showing healthy growth, the iPhone has been its cash cow for a decade. As the smartphone market stalls and iPhone sales stagnate, Apple needs a breakthrough technological innovation the likes of which we haven't seen much of during the Tim Cook era. And the company knows it. 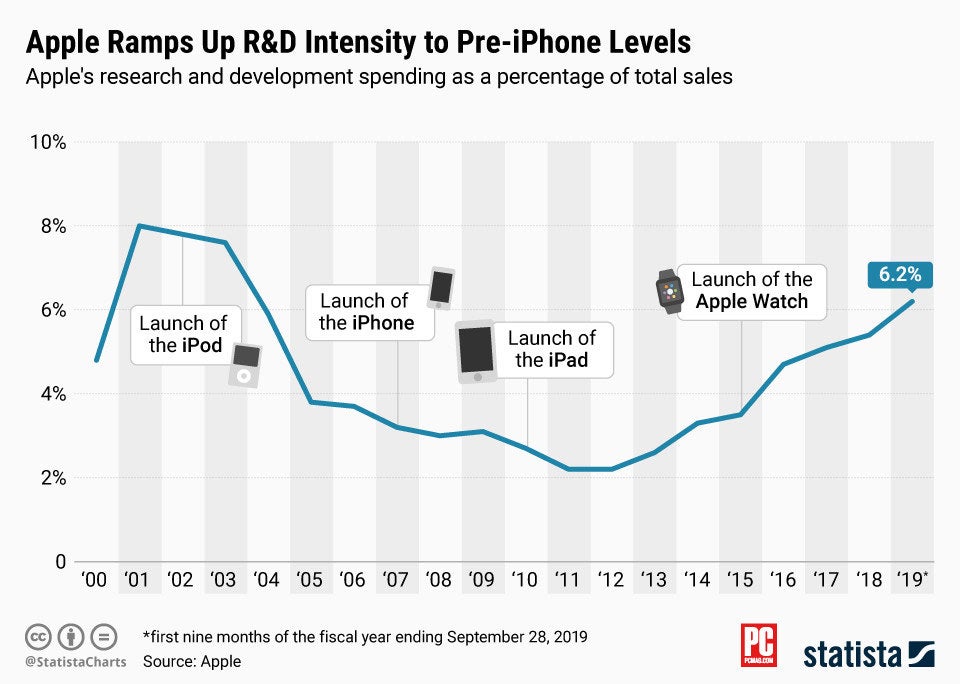 So it's not surprising that Apple spent a higher percentage of its total sales revenue in Q3 on research and development than it had in any quarter since before the launch of the iPhone. The company spent $4.26 billion on R&D in Q3, or 7.9 percent of its total sales. Overall, Apple has allotted 6.2 percent of its 2019 sales revenue to R&D, its highest percentage since 2003.

Over the past decade, Apple's yearly R&D spending has risen from $1 billion in 2009 to a projection of more than $13 million in 2019. As for where all that money is going, the company has invested in AI, autonomous cars, augmented reality, biometrics, and plenty more we may never know about unless a product is unveiled.

In the meantime, Apple is quadrupling down on its services business. The growing revenue umbrella includes iCloud and Apple Music subscriptions, App Store and iTunes sales and commissions, Apple Pay fees, and newly announced services such as Apple News+ and Apple TV Channels.

In Q3, Apple's services revenue accounted for 21 percent of total sales, reaching a new high of $11.5 billion, up only incrementally from last quarter but 12 percent year over year. This quarter is also the first time iPhone sales dipped below 50 percent of Apple's total revenue. 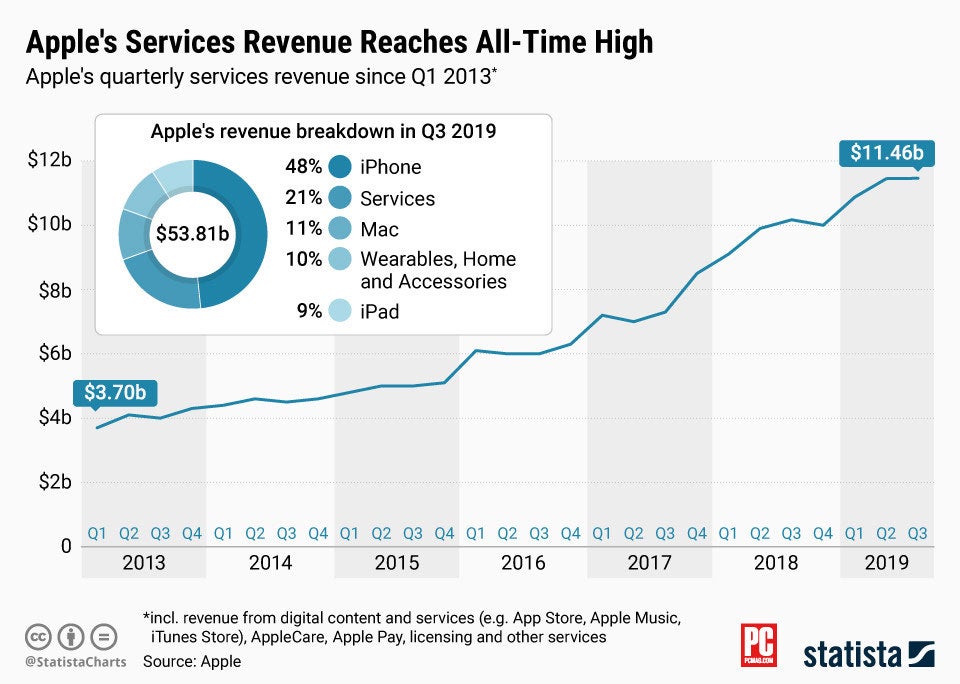 There's a reason Apple and other tech powerhouses are bolstering their cloud-based services portfolios. The profit margins are extremely high, and services carry recurring monthly subscription costs, providing consistent, growing revenue -- as opposed to a consumer buying a device every few years.

Apple's services revenue will only grow in the next year or more as its biggest bets enter the market. The Apple Card launches this month, the company's Apple TV+ streaming service will debut sometime this fall for an unspecified cost, and Apple Arcade is Cupertino's horse in the 5G-enabled cloud gaming industry, competing against Google Stadia, Microsoft xCloud, and others.

Who knows whether Apple will surprise us again with a game-changing tech product on the scale of the iPhone? But while the company continues to pour more money into R&D, its services business is slowly turning Apple into not just a device- and software-maker but also a media and entertainment giant, a financial services provider, a gaming platform, and beyond.