From Father to Son

At Keenan Winery viticultural brilliance is a tradition. 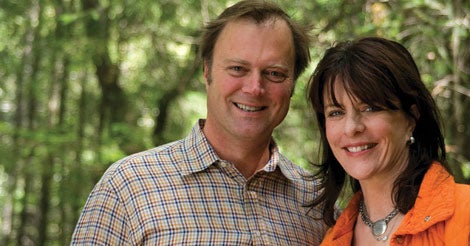 A winding uphill drive on a stunning mountain road brings wine tourers to the 180-acre Keenan Winery. The dramatic greens and dusty browns of the Mayacamas Mountain Range color the scenic backdrop while diaphanous wisps of fog create the perfect microclimate for growing distinctive, flavorful grapes. It's easy to see how this mountainous region lured a late-nineteenth century vintner and how again--80 years later--it enticed yet another enterprising vintner by the name of Robert Keenan.

Upon arrival to the redwood tasting room, wine tourers are greeted by a friendly staff. They learn that the winery was started by the late Robert Keenan and is now operated by his son, Michael, and are entertained with anecdotes of more than 30 years of Keenan family winemaking, while tasting Keenan's acclaimed varietals. They also have the opportunity to tour the wine cellar.

As tempting as it may be to linger in the comfortable tasting room, the best way to experience the Keenan Winery is to carry a glass of a 2005 Merlot Napa Valley, 2004 Cabernet Sauvignon Napa Valley, or other varietal favorite outside to the winery's lawn. It is while sitting at one of the picnic tables that tourers may drink in the exquisiteness of the Keenan flavor--from the rich, deep ruby fruits of the wine to the awe-inspiring scenic views.

There's a tremendous quality in the Keenan Winery tasting experience, one that seems to transcend from the vines right into the wines. Illustrious wine critic Robert M. Parker Jr. detected this, proclaiming in The Wine Advocate, "If you haven't discovered the wines of Robert Keenan, it's time to jump on the bandwagon as quality appears to go from strength to strength." Michael Lonsford, wine critic with the Houston Chronicle, was equally taken, lauding Keenan Winery's Cabernet Franc as "one of the best in California." And, Wine & Spirits 19th Annual Restaurant Poll (2008) ranks Keenan's Napa Valley Merlot as the sixth most popular Merlot in American restaurants. The Keenan Winery, at a production of 12,000 cases per year, is really making its mark on the wine industry.

Proprietor Michael Keenan seems to carry on with the same viticultural brilliance as his father-and then some. He has developed a more expansive list of varietals and added a proprietary blend of Merlot and Cabernet named "Mernet." He has also fulfilled one of his father's wishes by implementing a solar power system that generates one hundred percent of the winery's electricity needs. "My father believed in the inextricable link between preserving the environment and keeping the business going. I believe it's ultimately about what practices lead to quality--and preserving resources allows us to focus on things that create quality," says Michael.

Thanks to the foresight of a nineteenth-century viticultural pioneer, the mastery of Robert Keenan and, now, the hard work of his son, Michael, a verdant place in the mountains of St. Helena has become renowned for its excellent wines.

Getting There:
From Hwy 29, take Madrona Ave. west three blocks and turn right at
Spring Mountain Rd. Go about 4 miles.