From Professors to Pinot

For those interested in rousing tales of Viking lore and conversational German while tasting award-winning wines, Claiborne and Churchill Wineryis a must stop on a Central Coast tour.

In 1981, Claiborne (Clay) Thompson was a professor of Nordic Studies, and Fredericka Churchill taught German at the University of Michigan. A trip to California inspired them to leave the security and routine of academia behind and throw their lot in with the winemakers of the Central Coast. "Fortunately, we didn't have any idea how hard it would be to start a winery from scratch, otherwise we would have been afraid to take the plunge," says Clay. 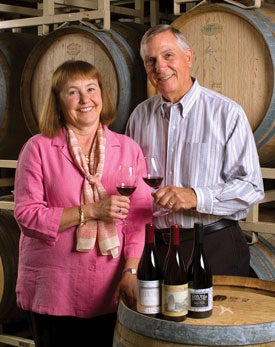 Clay took a job at Edna Valley Winery as a cellar rat making six dollars an hour, while Fredericka supplemented the family coffers by working at a local bookstore. Given a small space at Edna Valley Winery, they set up shop. There was never any question about what they would produce. In 1983 Clay and Fredericka backpacked along the Route du Vin of Alsace, France, touring and tasting at wineries along the way, and talking to local vintners about their product. Upon returning to California they bought 30 wine barrels and eight tons of grapes-Riesling and Gewürztraminer-and moved out of their small space into a warehouse winery in an industrial park. Claiborne and Churchill's first harvest in 1983 was 565 cases. This fall's crush of more than 10,000 cases will celebrate their 25th Silver Anniversary.

Although they made their reputation with dry Alsatian-style wines, they also make 12 other varietals including Chardonnay, Pinot Noir, Syrah, Cabernet Sauvignon, as well as Pinot Gris, Dry Muscat, and Edelzwicker. These wines are available at their tasting room and through their Cellar Club membership. Using traditional European techniques such as barrel fermentation and aging, minimal manipulation of wine and juice, indigenous yeast, and limited use of SO2, they have consistently turned out award-winning wines. As a measure of their success, their 2005 Pinot Noir recently took the Double Gold at the Sacramento State Fair, and was named Best Pinot Noir in California. And their 2001 Riesling was the sole American wine to win a gold medal at the annual Riesling du Monde competition in Alsace, France.

In 1995, Clay and Fredericka also constructed California's first environmentally friendly straw bale building at their winery. With its 16-inch-thick walls made of rice straw, which insulate and maintain constant cellar temperature, there is no need for mechanical heating or cooling. Their daughter, Elizabeth, works when she can in the tasting room, where she greets wine tourers from around the world.

Claiborne and Churchill Winery's membership to their Cellar Club offers 20 percent off on all wine purchases, their newsletter, first notice on new and limited-release wines, discounts on merchandise, and invitations to dinners, tastings, and parties.

"I guess after 25 years of hard work, you could say we're an overnight success," quips Clay. As the sun shines on another pristine day in the Edna Valley, Claiborne and Churchill Winery makes a very satisfying spot for any touring day.