The 'Imposter Burger' is made from meat substitute and is coated in the Colonel's Original Recipe herbs and spices.

KFC is jumping on the plant-based bandwagon and launching its first ever vegan fried "chicken" burger.

The fillet will sit atop iceberg lettuce and creamy vegan mayo, sandwiched together in a soft glazed bun.

A spokesperson for KFC confirmed to INSIDER that the Imposter Burger clocks in at 450 calories, practically the same as the chicken equivalent at 475 calories. 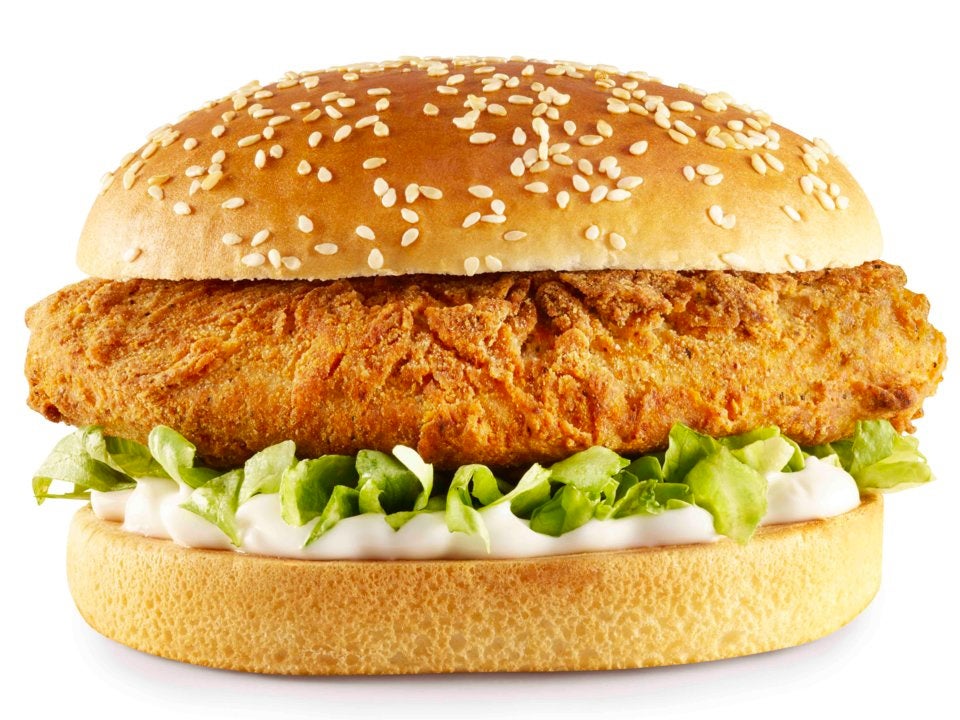 The vegan burger will be made with the same spices as the chicken equivalent.
Image credit: KFC

The Imposter Burger will also contain a respectable 18.8g protein, which although less than the 29.7g of its chicken counterpart, is a decent amount for a vegan patty.

The burger is a world-first for the American fast food chain, and is currently only going to be available in select KFC stores in the U.K. for a four-week trial run.

From June 17, vegans, flexitarians, or simply intrigued meat-eaters can sample the Imposter Burger at the following branches of KFC in Bristol, London and the Midlands:

The same KFC branches will also be offering a new vegetarian creation called the Southern Fritter Stacker, which will be available as a burger, wrap or ricebox, from July 15.

Victoria Robertson, "Chief Vegetable Enthusiast" at KFC U.K. & Ireland commented: "We know … it's unfair. Vegans have been cruelly denied the incredible taste of KFC up to now, which is why we've worked hard to perfect The Imposter -- a vegan burger that the Colonel would be proud of."

KFC's U.S. president Kevin Hochman recently told Business Insider that the company was looking into launching vegan options in the States too, which has been a surprising development for him.

"If you would have asked me six months ago, I would have said no, to be completely honest with you," Hochman said. "Because we're about fried chicken."

But he added: "In the last two weeks I've made several appointments with some of the big guys, just to figure out -- what does alternative protein look like in chicken?"

The launch follows the introduction of plant-based alternatives at other popular fast food chains: Burger King now has the Impossible Whopper, Greggs launched a vegan sausage roll, and IKEA is working on a plant-based version of its signature meatballs.

And the trend for lab-grown meat alternatives shows no signs of slowing down. In fact, a recent report claimed that by 2040, 60% of the "meat" we consume will not come from animals.