By Mat Smith
May 16, 2016
This story originally appeared on Engadget

Researchers at the University of Maryland were able pull away color and chemicals from a block of wood to leave it impressively see-through. The result is a material that is both stronger and more insulating than glass, with better biodegradability than plastic. "We were very surprised by how transparent it could go," said Liangbing Hu, who wrote about the project in Advanced Materials.

Hu's team isn't the only group that's developed a technique for transparent wood -- Swedish researchers have also been able to clear out that pesky visible pulp, replacing it with a transparent polymer. The treatment techniques appear pretty similar: it's a two-stage process.

The researchers first boiled the wood in water, sodium hydroxide and other chemicals for roughly two hours. This flushes out lignin, the molecule responsible for giving wood its color. The team then poured epoxy over the block which makes the wood four to five times stronger, although it makes it all a little less environmentally-friendly in the process. 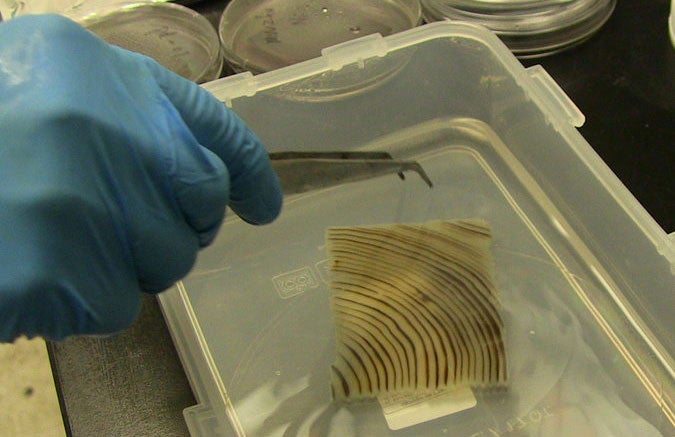 One of the great properties of the treated wood is how it retains the structure and natural channels from when it was a tree. These micro-channels can then deliver light similarly to how it moved nutrients around as part of a plant. "In traditional material the light gets scattered," said Hu. "If you have this waveguide effect with wood, more light comes into your house."

So what's stopping us living in see-through wood houses, aside from privacy issues? Size limitations. Five by five-inch wood blocks are as large as they've been able to make it work, ranging in thickness from paper thin to about a centimeter thick -- far more substantial than what Swedish researchers have shown off so far. Dr. Hu and the University of Maryland scientists are is still working to scale it up further.

If the team can accomplish that there's no shortage of applications, ranging from windows, building materials and furniture to smaller, precise, optical equipment that's normally made from glass or plastic.