On March 23, only Microsoft still had the symbolic $1 trillion-plus market capitalization after the COVID-19 crisis killed off billions in tech-company value. (Apple's back too, for now.)

By Eric Griffith
March 27, 2020
This story originally appeared on PCMag

What a difference a month — and a pandemic — can make in the so-called worth of a U.S. tech company.

Back in 2018, speculation was on to see which company would be the first to have a $1 trillion market cap. Apple won that race handily. It didn't take long, though, for Alphabet (owner of Google), Amazon and Microsoft to reach that milestone too. Microsoft even held the trillion-dollar spot alone for a while. 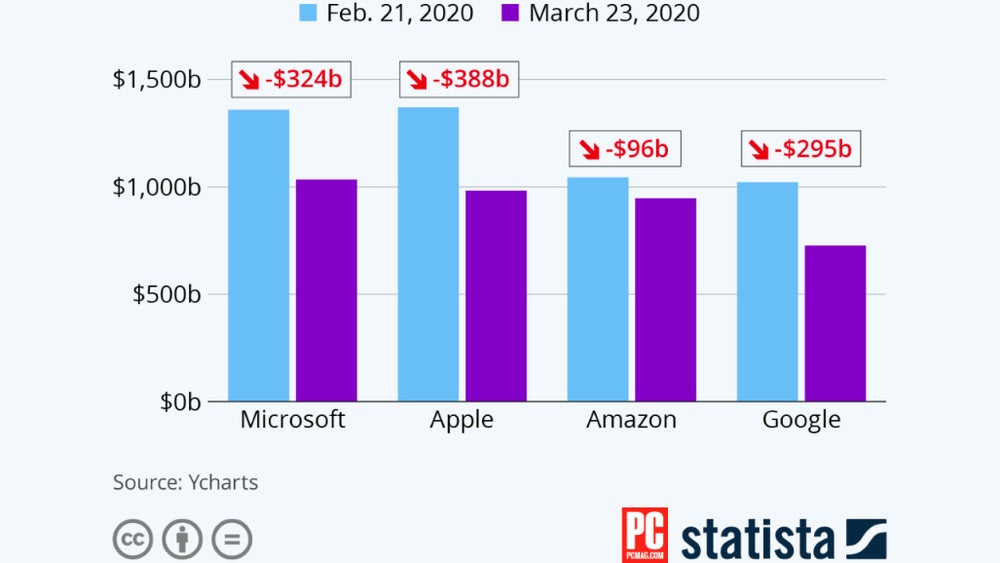 But the chart above shows the toll that the coronavirus has taken on the stock market. With info from Ycharts, our partners at Statista looked at the market cap from a month ago in February up to Monday, March 23, and the drops for the Big Four in tech are staggering.

Amazon had lost the least, at a measly $96 billion, probably because it is (arguably) the company we need most right now, with so many people sheltering in place. But it still was enough to drop the company below that symbolic/magic $1 trillion.

Google and Apple were also both below a trillion bucks as of that Monday. Apple's loss for the month is the highest, at $388 billion — but Apple was close to scratching the $1.5 trillion spot before all this happened.

Microsoft was also up there with Apple on February 21, but its loss over the month of only $324 billion mean it remained above $1 trillion market cap. For now.

As of this writing — on March 25, two days after the chart's data was compiled — Microsoft's market cap is $1.13 trillion and Apple is back up to $1.1 trillion. Alphabet is at $758.7 billion, and Amazon is holding steady around $952.7 billion. And all of this might have changed completely by the time you read this.

The whiplash state of the market is going to continue to wreak havoc on these and all other stocks until the world returns to some semblance of normal. And who knows how long it will take some companies to recover? These four were lucky to be as overvalued as they were before the crisis hit.