The History of Excellence

The downtown tasting room coupled with exquisite wines, give the Arroyo Robles Winery a quaint charm reminiscent of the Paso Robles' history. 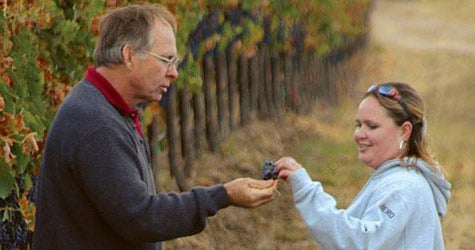 The historic Mastagni building in downtown Paso Robles is said to have been a camera store, a drugstore, and many other things before it became the tasting room for Arroyo Robles Winery in 2006. Since then, it has served as a hot spot for visitors in search of distinctive wines.

The popular wines are handcrafted by Bob Shore, a former engineer who has worked alongside his son Jason and daughter Brianna for years. They started making wine in 1998, sharing equipment in a converted apple barn in See Canyon, just north of Avila Beach. They developed one vineyard in Paso Robles, sold it, and purchased their current estate vineyard six miles north of Paso Robles in 2005.

The Shores first intended to build a tasting room on their relatively remote vineyard site but were foiled by red tape. So their eyes turned to Paso's town square, where renovations were underway after an earthquake. "The downtown location of our tasting room is serendipitous," Jason says. He explains that they have met many neighbors and visitors who may never have found them otherwise.

The lively, dog-friendly tasting room, managed by Brianna, features a well-stocked shop of gifts and gourmet food items. It also frequently serves as a small classroom where Bob can guide wine enthusiasts through the nuances of tasting, food pairing, and blending. Bob's favorite class is his pruning seminar, which starts in the vineyard--just like his wines.

The Arroyo Robles Winery portfolio is distinctive and diverse. "Our goal is to create quality wines that taste good to people," Jason says. And they do. Recently, the 2006 Tempranillo was awarded a Best of Class at the 2009 Mid-State Fair Central Coast Wine Competition; while at the San Francisco Chronicle Wine Competition, the Grand Cuvï¿½e won a Double Gold. But, as highly as the Shores value accolades, they most appreciate the enthusiasm of their growing list of wine club members. The Shores currently produce around 4,000 cases of wine annually and expect to increase production this year to keep up with demand. From the taste of things, the historic building that houses Arroyo Robles Winery will continue to do so for quite a long while.