Uber Decals and Lyft Mustaches Are Hot Items on eBay

One of the original pink fur Lyft mustaches sold for $80.

There's money to be made selling an Uber decal or Lyft mustache, as long as you don't need them to make money as a driver for either company.

The insignia are a sort of trade dress for the burgeoning ride-hailing industry.

Uber has a glowing "U" that its drivers affix to their windshields, while Lyft cars sport "glowstaches." When Lyft started, it distinguished itself from all of the other cars on the road with a giant pink mustache.

As more drivers join the ride-hailing services and subsequently leave, it turns out you can make some quick cash by selling the decals.

Uber driver decals and Lyft mustaches have been popping up on eBay and Craigslist. One original pink furry mustache went for as high as $80. That's a bit of a profit considering anyone who signs up to drive on the ride-hailing platforms receive the 'staches free of charge.

One bidding war with 11 entries on eBay drove a glowstache price from $20 to $45. A search of sold glowstaches show around 100 have been bought. Uber decals are typically cheaper because they're so easily re-creatable, although they (or their counterfeits) are available in the thousands.

It's not just decals that have created a market. There's also a whole subsection of signs that clip on to the back of headrests instructing riders how to give good ratings or reminding them to tip. 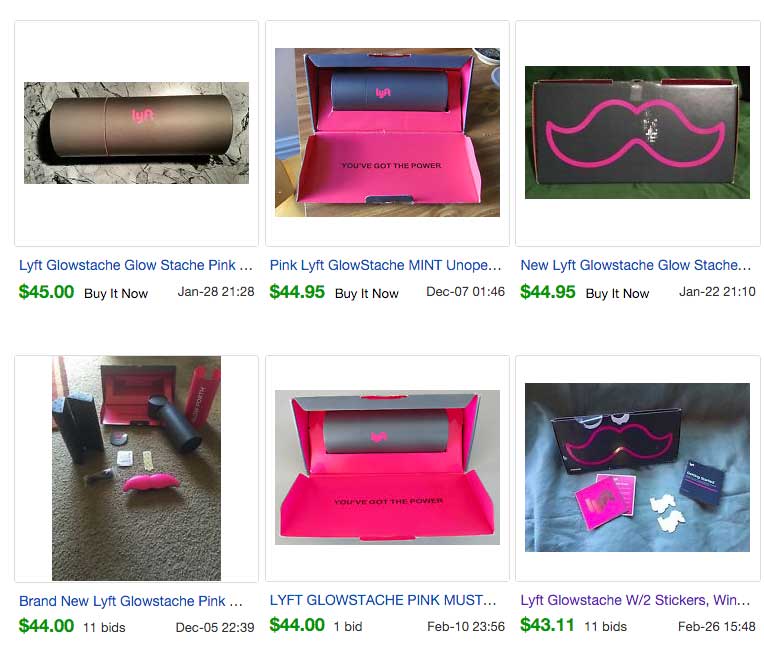 Who exactly is buying up the decals is unclear. It could be old drivers re-joining the companies or new drivers who misplaced their own decals. Uber and Lyft both declined to comment.

There hasn't been a publicly recorded problem of a car impersonating an Uber or Lyft using a purchased inisgnia, but the sale of the companies' official decals is a good reminder to always double check the car make and model, license plate, and driver's name before you hop in the car of a stranger -- Uber decal on their windshield or not.

Biz Carson
Based in San Francisco, Biz Carson is a tech reporter for Business Insider.