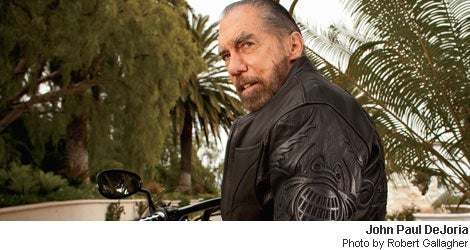 John Paul DeJoria has arguably achieved every entrepreneur's dream, parlaying a $700 startup, Paul Mitchell Systems, into a $900 million-a-year hair care heavyweight. The 65-year-old recently made Forbes magazine's list of global billionaires, thanks in no small part to the explosive sales of Patrón tequila, a brand he co-founded 20 years ago with little idea that it would define a new, "ultra-premium" market for what was once seen as a bottom-shelf spirit.

"He's one of the most giving guys on the planet, and he's a visionary," says Patrón CEO Ed Brown. "Who would have ever thought of doing ultra-premium tequila back in those days?"

Patrón is No. 1 in the top-shelf-tequila segment it created, and it's outsold only by Jose Cuervo's array of less expensive tequilas. It's been name-checked in rap songs, and it's distributed in Canada with the help of a Blues Brother, Dan Aykroyd. The company is branching out, recently purchasing Polish vodka brand Ultimat. Patrón, meanwhile, actually showed a gain in revenue in the first quarter of 2009. (Proof that when the economy sinks, people drink.) DeJoria, estimated to own about 70 percent of the endeavor, hasn't ruled out going public. As it is, Forbes states his net worth is $2.5 billion, placing him just outside the 100 richest people in the United States.

DeJoria, showing off his trademark silver beard and svelte, 178-pound frame, played himself in 2008's You Don't Mess with the Zohan. The six-footer is on top of the world, to be sure, but he's also down to earth. Married with six children, he has lived both down-and-out and high on the hog--whether it's rolling with Hells Angels or dining with Cher. DeJoria grew up in a bungalow in the immigrant-rich Echo Park neighborhood of Los Angeles, and he notes that his childhood stead was about one quarter the size of his living room. He was homeless twice before achieving success with Paul Mitchell in the early 1980s; now, he has homes in Malibu, California; Las Vegas; Austin, Texas; and he won't say where else.

On the occasion of Patrón's 20th anniversary, we sat down with DeJoria at his Mediterranean villa in a gated community overlooking the shimmering Malibu coast.

As a child, you were fairly entrepreneurial.
My first job, 9 years old, part-time, was selling Christmas cards door-to-door. Ten years old, my brother and I had paper routes. We delivered a morning paper called the L.A. Examiner. Get up at 4 o'clock, fold your papers, deliver them and get ready for school. My parents came over from Europe. My mom's Greek. My father's Italian. And it was just my brother, my mother and I by the time I was 2 years old. So I kind of pitched in.

As you got older, you continued to work.
The job that was one of the most influential experiences you can imagine was door-to-door selling encyclopedias. It was Collier's Encyclopedias. Tough job. You're just cold-calling. Doors slam literally in your face--maybe 30, 40 doors before the first customer will actually talk to you and let you in.

I guess in business it only gets easier from there.
Oh yeah. You've gotta talk your way in to the front door. And that was the mid-1960s. The set of books was $369. And it was with a payment plan of $36.95 a month. We gave them little piggy banks to put quarters in.

You've been homeless.
Twice. Once, when I was about 22 years old, and I was a victim of circumstances. And I had a son, a 2-year-old son. The other time was when I started John Paul Mitchell Systems in 1980. I wasn't getting along with my wife at the time. So I had left and given her all the money. We had a backer for Paul Mitchell Systems putting in a half-million dollars. That money was supposed to arrive that day. Never got a penny. So I just slept in my car. And I slept in my car for the first two weeks when I started the company. So we started with humble beginnings. The end result is we ended up with no partner. So we got it all to ourselves--my partner [Paul Mitchell] and I.

The first time you were homeless, what were the circumstances?
My wife decided she didn't want to be a mother anymore. What money was there she just took and split and left me with our son. Rent was overdue. And you know, a couple weeks later I was out there hustling, getting a job, picking up Coke bottles along the way, cashing them in, two cents for a little one, five cents for big one. And we ended up on the street for a few days there. Then, I ended up bunking up with a biker friend of mine.

Do memories of the streets motivate you?
It sure makes you very appreciative of what you do have in your life. Those who are homeless--like families, like people with kids who are homeless--I really have a heart for. So I do participate in a lot of charitable organizations that take the homeless off the streets.

So you started Paul Mitchell with $700. A lot of people would wonder what you were thinking.
I was thinking I had everything lined up. My partner had an extra 350 bucks, I borrowed 350 bucks from my mom, and we took off [laughs]. She never knew how bad off I was. That paid for the artwork. It took two weeks to make the products, and we had two weeks left before the bills were due. Just like selling encyclopedias, I went door to door, beauty salon to beauty salon.

How did you start Patrón?
I started Patrón in 1989 with a friend of mine. I had put my friend Martin [Crowley] in the architectural business. He had a little bad luck in his life, so he would go down to Mexico, buy stone pavers and furniture and come back to the United States and sell it to architects. I said, "Martin, why don't you bring back a few bottles of whatever the best tequila is that Mexicans drink down there." So Martin brought me back the tequila and this bottle he found, that was the same bottle as Patrón today.

He said, "JP, I have this idea; taste this." I thought, Wow, that's smoother than anything we've ever had. He said "I can make it smoother. I can send a mixologist down. And here's a bottle we can put it in, and I'll design this beautiful label for it. What do you think about going into business together?" We made it a little smoother, put it in these hand-blown bottles. So I bought a thousand cases--12,000 bottles. And my thinking was, if no one bought it, I would keep it, because Paul Mitchell was doing good. And for 10 years everybody I knew got one--for their birthday, christening, bar mitzvah, any kind of holiday you could think of. "Here's a bottle of tequila! [laughs] If you're too young, give it to your parents."