How to Bite Off a Chunk of the Zombie Economy

Zombie-related sales are a $5 billion market opportunity any entrepreneur can feast on. Here are a four ways you can reap some zombie-related profits -- and they're not just for Halloween, either. 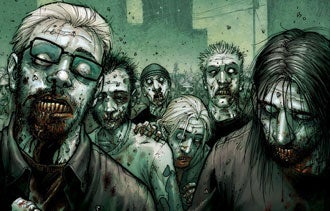 What's that, groaning and rapping insistently on your windowpane? It's the sound of opportunity knocking. Opportunity in the form of -- well, if you haven't guessed, zombies.

If you've been marooned on an uninhabited island without cellphone coverage the past year or two, here is the news in a nutshell: Zombies are huge. The financial site 24/7 Wall Street estimates the flesh-hungry undead are currently a $5 billion annual sales juggernaut -- and Halloween costumes are just the beginning.

The zombie apocalypse -- metaphor, some would say, for our economic state -- is the subject of smash-hit AMC television show The Walking Dead, MTV's cult zombie-vampire-werewolf satire Death Valley and the hilarious classic-lit parody Pride and Prejudice and Zombies, just to name a few.

Best news of all: Zombies are not real, and won't eat your flesh. Instead, they're a market opportunity any entrepreneur can feast on.

How can you get your slice of the zombie profits? Here are four ideas -- and they're not just for Halloween, either.

Will you cash in on the zombie trend? Leave a comment and tell us your angle. And remember to lock those doors tonight!

How Facing Your Demons Improves Your Business and Your Relationships

Facing the big monsters in your life will give you unshakable confidence in your ability to perform in the future.