For the first time since 2012, the fast-food chain will release its famed BBQ rib sandwich nationally. 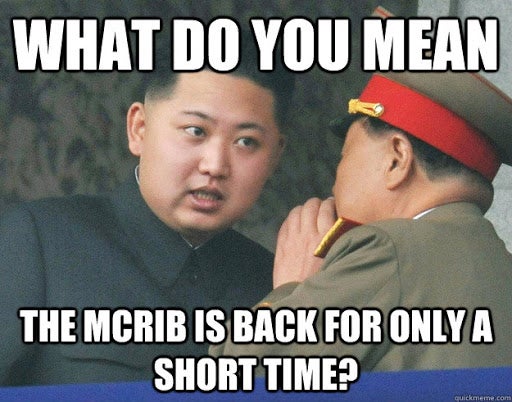 The McRib was first introduced in 1982, shortly after the Chicken McNugget made its debut. But unlike the omnipresent McNuggets, the McRib is a limited-release menu item. Each year, often in the fall, McDonald's announces the appearance of McRibs at select franchises. For instance, a quick peek at the McRib Locator app reveals that you can now purchase one in Hamilton, Montana.

The nationwide release this year comes as McDonald's U.S. sales rose nearly 5 percent in its latest quarter, according to CNBC. On the stock market, shares of McDonald's have risen 6 percent so far this year. McDonald's is hoping the buzz around the McRib will help fuel sales in a year that has been challenging, to say the least, for the restaurant industry.

Cyber Monday Extended: Get Cloud Storage at a Big Discount