That staple of 20th century PR is still essential in the digital age.

For years, we've heard that traditional media from newspapers to television advertising is dead. Yet, somehow, all of these things have not only survived, they've expanded since the advent of the Internet.

Websites and social media have certainly made an impression on the world of marketing, but the vastness of "online" has far from replaced traditional forms of advertising and PR. Traditional press releases are still in use today, and in many cases, are still the best form of communication for vendors to get their products or events noticed. To understand why, let's review the purpose of, and history behind, the press release.

Traditionally, the first press release is claimed by the Pennsylvania Railroad Company, which released an official statement following the tragic deaths of more than 50 people in 1906. Press releases aren't just used to manage crisis situations, however. Companies use this century-old form of communication to talk about any "hard news" they want to tell the public. 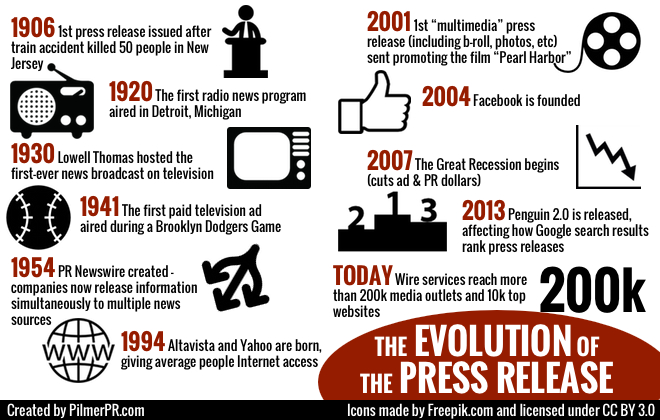 With the advent of consumer-friendly search engines in the 1990s and social media in the early 2000s, PR professionals, and the press release with them, had to evolve. Press releases soon became another way to boost a company's online presence. In addition to reaching reporters, press releases became searchable by the general public. Many entrepreneurs trying to generate web traffic flooded the wire with soft bits of "news" containing key search phrases and links back to their company or affiliates.

John Pilmer, APR is an award-winning, accredited public relations and marketing communications advisor for emerging sector leaders. His firm, PilmerPR LLC facilitated the launch of 4 startups into the Inc. 500 Fastest Growing Companies in America. He holds an undergraduate degree in Business Management and Marketing from Brigham Young University, as well as an MBA from the University of Utah.