By Diana Ransom
September 26, 2011
Opinions expressed by Entrepreneur contributors are their own. 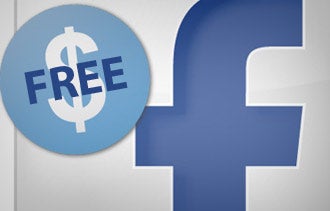 During the recession and beyond, small business owners' No. 1 challenge has been a lack of customers. To fill the gap, experts often suggest boosting sales and marketing efforts, rather than cut back. After all, as the saying goes: "In good times people want to advertise, in bad times, they have to." But for some lucky businesses, come January, they may be able to spread the word without paying a dime.

"Our goal is to give small businesses a boost by helping them find customers the best way possible -- through recommendations from friends," Sheryl Sandberg, Facebook's chief operating officer, said in the release announcing the initiative.

Facebook is teaming up with the National Federation of Independent Business and the U.S. Chamber of Commerce in an education effort designed to provide local businesses with webinars, case studies and tips for boosting their marketing efforts. The social media giant also plans to give away $10 million in advertising to 200,000 businesses, starting in January 2012. That amounts to a freebie in the form of $50 worth of credits toward Facebook ads.

That might not sound like a lot, but, according to users, a little can go a long way on Facebook. In one example, Jim Olenbush, the owner and broker of Cantera Real Estate, a real estate firm in Austin, Texas, was able to target a Facebook advertisement of his company's listings to a specific set of potential customers whom he suspected would soon move to the area. The idea came from reading the newspaper and learning that a large company in another state was planning to relocate to Austin. According to Jason Falls, a social media maven, blogger and author of No Bullshit Social Media (Pearson, 2011), that one campaign cost Olenbush just $200, but, in return, he sold about 10 homes. "We all know that the commission from selling 10 homes amounts to a lot more than $200," he says.

Usage of online social networking sites like Facebook is growing. In July, more than 213 million Americans were active on the Internet, according to media research firm comScore. And the second most visited site for the month was Facebook.

Facebook's own data suggest that more than half of its 800 million active users have made a connection to a small business. That amounts to about 700 million connections between existing and would-be customers and local businesses, adds Facebook.

Like pay-per-click ads on search engines, when a consumer clicks on your Facebook ad, the advertiser (you) are asked to pay a set rate for that click -- anywhere from 5 cents to 25 cents. Facebook, starting in January, will give you $50 worth of those clicks for free. Note that the freebie will be awarded to owners on a first-come, first-served basis up to 200,000 businesses.

It's not clear whether the program is open to businesses outside the U.S., however. In the joint press release the plan is being billed as a way "to help American small businesses grow and create jobs."

How has advertising on Facebook worked for your small business? Leave a comment and let us know.